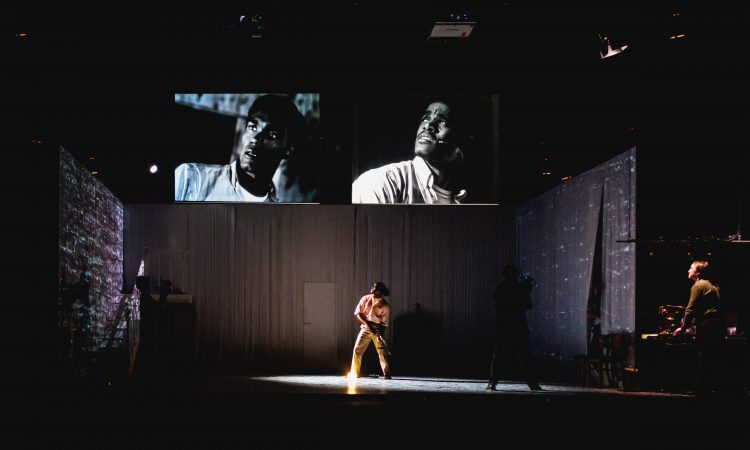 Directed by Andrew Quick and Pete Brooks, the play is a reconstruction, almost shot for shot, of George Romero’s debut flesh-eating feature, and to prove it, the original film is projected onto a screen above the stage from start to finish. On a second screen, hung next to the one with the movie on it, is the live feed coming from the onstage cameras and it deftly cuts from scene to scene as the seven strong cast perform a kind of onstage cinematic karaoke tribute.

“The original plays before us like a colossal metronome” the co-artistic directors write, in the foreword to the accompanying programme. This sets the pace for what initially comes across as an absurdly impossible fan tribute, but becomes something much, much more interesting as it develops.

The original film was made in a gritty, urgent, documentary style, with many low angled shots and over-the-shoulder views, the actors have to dash from place to place with absolute precision, taking turns at filming each other too. You realise that suddenly there are two Barbaras on stage at the same time (“they’re coming to get you Barbara” her brother Johnny says in the cemetery, moments before being eaten) and they are alternately either hamming it up for the camera or rapidly preparing for the next succession of shots. In a little animation workshop set up at the side of the stage, all of the outdoor scenes are remade using model sets, with a nod to another low budget black and white monster movie: Plan 9 From Outer Space. Cars and zombies are dangled in on the end of wires, while dry ice wafts in from beneath the fake grass. I was not sure when, if at all, you were supposed to laugh out loud.

Hand drawn scenery is projected onto the set and the cast interact with them as they remake the film, this is interspersed with the occasional addition of news clips from the time that the original film was made. The effect of this is to show how the ‘remix’ can become a creative mode for retelling the circumstances of the film’s production.

“We may not enjoy living together, but dying together isn’t going to solve any of our problems”

So says Helen Cooper prophetically, to her husband who is trying to bully everyone into hiding in the cellar.

Night of the Living Dead first hit screens in the USA in 1968, a year that has become notorious as one of the most turbulent periods of the 20th century. This was the beginning of the end of a socially liberating ‘Summer of Love’ in the USA. We are shown TV clips that broke the news about the shooting of Dr Martin Luther King, we hear a monologue warning of the threat of retaliation and rioting in US cities, then there’s Robert Kennedy’s assassination, less than five years after that of his brother, and bombs being dropped from planes over Vietnam.

As the sole surviving member of the stranded group in the house, a black man, cowers by the cellar door, Martin Luther King’s “I have a dream” plays out. But for anyone who knows the film’s genuinely shocking ending, he is only waiting for the National Guard (or “a bunch of jubilant rednecks” as the programme puts it) to come and get him.

With their Night of the Living Dead Remix, Imitating the Dog have come up with a wickedly inventive piece of work that pushes on-stage physicality and AV dexterity to its limits. It plays from 6th – 15th February at Leeds Playhouse, for booking details see here. If you even have a passing interest in the film, you should not miss this!