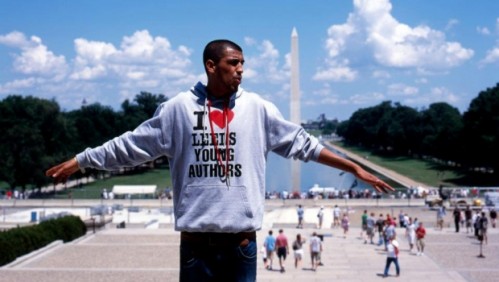 NUTSHELL:
Leeds Young Authors – volunteer, Chapeltown based, inspire and enable young people to write and perform through coaching and workshops.

We Are Poets – film following the preparation, journey and performances of these young Leeds poets at the International Poetry Slam Competition in Washington D.C.

Paula’s done the hard work with her fab write up here which I entirely agree with. Thanks Paula for covering the main issues and clearing the deck for me to witter personal and local about the arts and young people.

This film was so good I’ve reviewed it twice, the other, for the Guardian Northerner, signals a declaration of class war on arts funding. Here I’d like to gently nudge more local production. There is so much that traditional and community arts could learn from Leeds Young Authors and We Are Poets.

Right, I should fess up. Although I’m a private, retiring lad and like to keep my feelings to myself, one of my secret, hidden passions is the city of Leeds. I love it….I sort of live it. I’m commenting on this film and engagement from the heart and, were it not a complex and potentially dangerous medical procedure, my heart is also where I’d like a We Are Poets or Leeds Young Authors tattoo.

This art was alive and vital. Through its veins pumped honesty, integrity, experience and reality.

Leeds Town Hall is packed to its beautiful ceiling for We Are Poets, part of the Leeds Young People’s Film Festival, organised by MediaFish, a not-for-profit organisation run by young’uns. The film’s opening sequence of ultra slow-mo moving through the streets and spaces of Leeds, accompanying the poem ‘I Come From’ was stunning. The poem’s final line and a subsequent picture of a young woman’s hand tattooed with the inscription ‘poet’ brought dust down from the ceiling that got in my eyes, making them water – they should clean that ceiling, it kept happening. There were many beautiful and funny moments throughout the film but it took me so into the moment and, as its burrowed its way into my soul, I got lost in it and mental notes vanished in the mist.

I loved it with an absolute passion, it’s everything the arts should be but almost always isn’t.

WAP and LYA were all about roots, place identity and ultimately a pride in ‘not London but Leeds, West Yorkshire’. I think a bigger percentage of our arts should be informed by the place they come from and recognise a USP.

For example, which mainstream theatre in the UK won’t have put on a production of Annie or West Side Story? Over the years, what differentiated most of the West Yorkshire Playhouse productions from any other theatre in the UK? I’d argue, very little. What could make the WYP stand out in the world market place of theatres and connect more tightly to West Yorkshire is a stronger West Yorkshire voice – be they dead or alive, the writers are certainly here.

In this film, for all to see, is how the arts can change the lives of young people. I know there are plenty of examples of community arts enabling people to produce but let’s increase that. Projects may include youth workshops but what about encouraging them to produce and display? What about empowering just as LYA does? The strength of voice will sometimes surprise us.

Let’s not just show people shiny trinkets. How’s about going into schools or youth groups, get them to take photos on their phone, blow those up 15x10ft rather than (or in conjunction with) a professional photographer. Display some art from high schools alongside that up and coming or established artist. Maybe don’t bulk push funding to ‘events’ but hand over some real power, the means of production and display to those who would normally be excluded.

Engage people in the production and they are more likely to commit to your event, festival or exhibition. Friends and family will come to see Leanne’s photo blown up 15x10ft – there were over 800 people at this screening – and next time Leanne, her friends and family will remain interested and be advocates. This way you’re more likely to engage the community and increase the value of creativity.

What could be better than Carriageworks or the recent Hebe Media project of short film making to all who applied or Breeze Festival getting young musicians jamming and performing? I reckon that young people can sparkle and inspire like no other group in society and we should empower them at every opportunity – granted they can also be a set of mardy, unmotivated gets. Next time a community event produces a pamphlet, booklet or book why not go to an old persons writing group or to high schools? Let them tell us about their troubles, their worries, their joy and their lives. Publish that. Maybe the writers could work with them towards a tangible goal.

Anyone controlling any amount of funding, you’re in a very privileged place and you can change lives, people’s perceptions of themselves and the perception of them to others. Ok, do the safe stuff but also look for the opportunity to empower, to encourage active creativity in those who may surprise and inform us – the ‘Community’.

I know that for a local artist these commissions may be the difference between creating and not. I never get any, that’s why I’m cynical, begrudging and bitter. If my shit doesn’t sell, I don’t write and not writing makes me not quite me. I’m lesser – a lesser father, a lesser son, a lesser husband, a lesser friend, a lesser human being. Flipping the situation, creativity makes you more than. Leeds Young Authors will be slightly more than they were before they began to create and express.

By the rule of 3.74 degrees of separation, creativity makes the world a better place. I’d like to see a more democratic approach to creativity. Let’s make Leeds known for enabling and involving young’uns (and maybe old’uns) in production and cultural expression. That young oik walking down your street could be the next Damien Hirst, Helen Fielding, Steve Mosby, Chris Moyles or Corinne Bailey Rae, given the opportunity. Let Leeds be known for empowering just as Leeds Young Authors empowers.