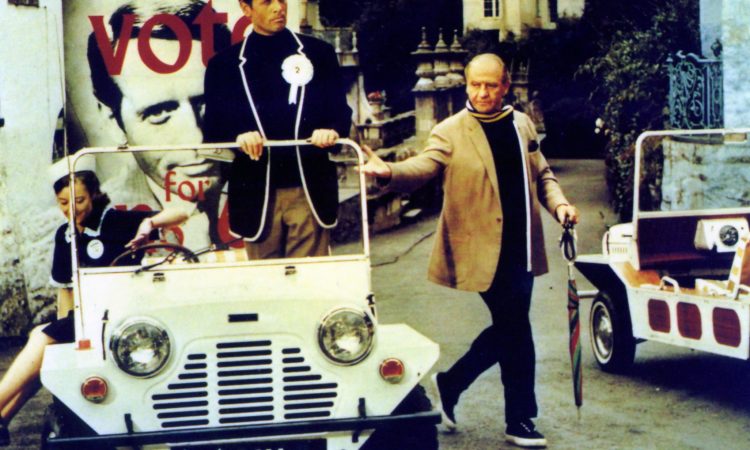 Photo: Number 6 (Patrick McGoohan) campaigns against Number 2 (Eric Porter) in Free For All…

Tonight’s episode is Free For All …

Number 6 is persuaded to run for election for the post of Number 2 with the understanding that should he win, he will meet Number 1. Assisted by Number 58, a young woman who speaks no English, Number 6 campaigns on the freedom ticket. His policy proves popular with his fellow inmates in The Village, and even Number 2 seems sympathetic, revealing how really he loathes being in charge. With a victory for Number 6 on the cards, can it really be that simple..? ‘No comment!’

Over to you Phil…

In a May 13, 1968 article in the Providence Evening Bulletin, Dr. George Estabrooks was described as a former consultant to the FBI and CIA and is quoted as saying that “the key to creating an effective spy or assassin rests in splitting a man’s personality, or creating multipersonality, with the aid of hypnotism… this is not science fiction. This has been done. I have done it.”

And in his book Hypnotism, published in the 1940s and available in any decent public library for decades (you can find a pdf on the internet in seconds) Estabrooks states that the creation of experimental multiple personality for operational use in military subjects, who he refers to as super spies, is ethical because of the demands of state security, or the overriding good of the community. He says,

We start with an excellent subject… We need a man or a woman who is highly intelligent and physically tough. Then we start to develop a case of multiple personality through hypnotism. In his normal waking state, which we call Personality A, or PA, this individual will become a rabid communist. He will join the party, follow the party line, and make himself as objectionable as possible to the authorities. Note that he will be acting in good faith. He is a communist, or rather his PA is a communist, and will behave as such. Then we develop Personality B, (PB), the secondary personality, the unconscious personality if you wish, though this is something of a contradiction in terms. This personality is rabidly American and anti-communist. It has all the information possessed by PA, the normal personality, whereas PA does not have this advantage… My super spy plays his role as communist in his waking state, aggressively, consistently, fearlessly. But his PB is a loyal American, and PB has all the memories of PA. As a loyal American he will not hesitate to divulge those memories.

He goes on to talk about the morality of social manipulation.

War is the end of all law. When we speak of keeping within the rules of the game we are childish, because it is not a game and true rules never hold. In the last analysis any device is justifiable which enables us to protect ourselves from defeat.

I can’t watch this episode of The Prisoner without this in mind (though the CIA themselves are more circumspect about the contribution of Estabrooks to the science of interrogation.)

Ignore the specifics of Estabrooks’ clunky terminology for a second (he was a social scientist after all) and compare and contrast the two distinct personalities Number Six displays in this story. This episode is full of doubles and dichotomous personality switches – watch for the startling change in Number 20, the affable “Truth Test” administrator who “could be a friend”, until he receives the phone call from Number 2 ordering him not to “damage the tissue” and stick to “first stage only.” He friezes for a split second, then with barely a change of expression becomes something quite terrifying. It’s a stunning performance.

Number Six starts out the episode his recognisably refractory self, wanting just to “mind his own business”, quibbling with Number Two over the provenance of his breakfast, and being generally objectionable to the authorities. But he soon seems to mesmerise himself with the possibility of power and morphs into something quite separate (an “alter”) when Number Two convinces him he’s the sort of candidate the Village needs. In the blink of an eye he’s standing for election and barking bonkers slogans into a megaphone.

The familiar Number Six reasserts itself after a shouting session with his new maid, Number 58, when he seems to have a bit of a turn declaring right after he’s done an election broadcast, “There is only one thing to learn and it can be learned very quickly. Obey the rules and we will take good care of you.” He makes a mission impossible style bid for freedom thumping a bloke in the balls on a boat, and Rover gets sent to round him up (“You were doing so well,” says Number Two, watching from a helicopter, “but now you’ve done something foolish.”) After a spell in the hospital he’s back to being just the sort of candidate needed and spouting nonsense at the hustings.

“Where do you desire to go? What has been your dream? I can supply it. Winter, spring, summer or fall, they can all be yours at any time. Apply to me and it will be easier and better.” 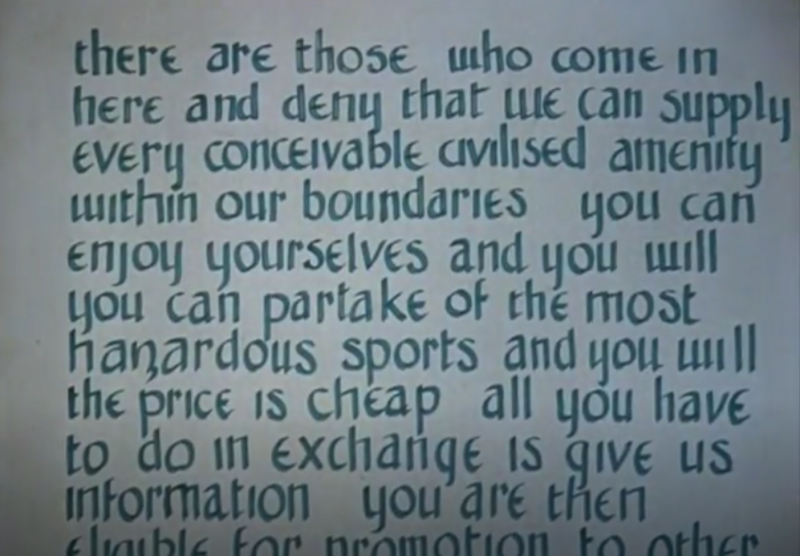 The Villagers in this episode follow a line McGoohan gave in an interview with Warner Troyer in 1977 : “Ah, the majority of them have been sort of brainwashed. Their souls have been brainwashed out of them. Watching too many commercials is what happened to them.”

I’ll not give the ending away, suffice it to say the Number Six’s brainwashing comes to an abrupt conclusion, his amnesiac barrier is broken, and he comes to realise what he’s done, wittingly or unwittingly – or what the Village has done to him. No wonder there’s always the sound of laughter whenever McGoohan declare he is a free man, “a person”!

In most episodes of The Prisoner there occurs a random moment of pure nuttiness, quite unrelated to the plot or character development, and it happens in Free For All in the final few moments as Number Two’s escape is foiled once again… I have no idea what these chaps are doing in the dark with Rover. It’s probably best not to ask… 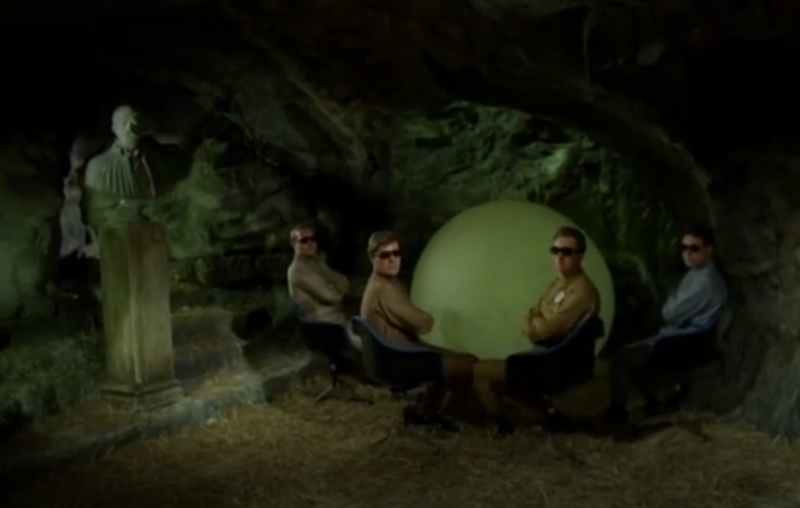 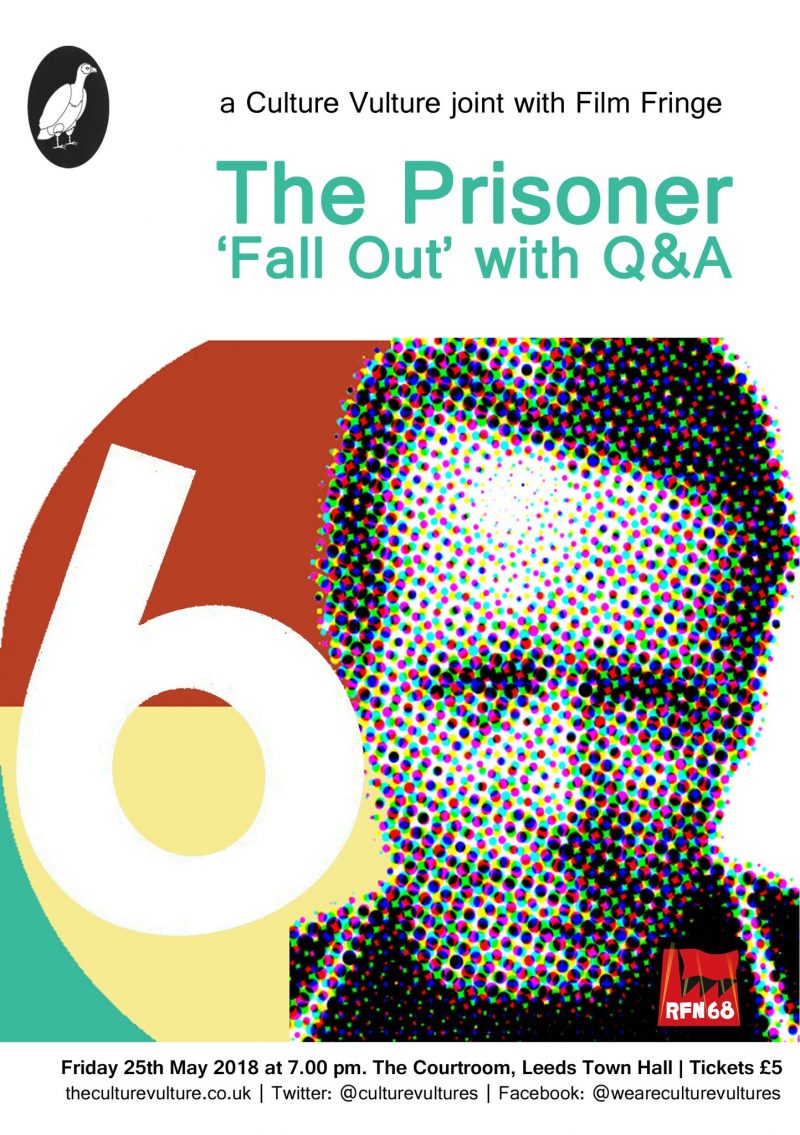