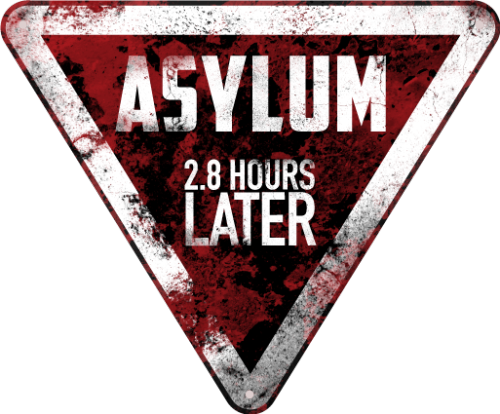 Kate Russell went along to the 2.8 Hours Later Zombie School, where volunteers are trained in post-apocalyptic, pant-wetting performance …

You might not think it to look at them, but the undead really make an effort.

For a lucky few it comes naturally, following a process of decay and reanimation, but for most it takes a lot of hard work to achieve that grave-fresh shuffle and brain-hungry moan. And that’s where 2.8 Hours Later’s zombie school comes in.

It’s is the closest you’ll get to the apocalypse without having to actually go through the whole thing itself.

“It’s a cross city zombie chase game” explains zombie coach Alex Noble, 25, which involves players puzzling their way to various secret locations around a post-apocalyptic Leeds, doing all they can to stay alive and uninfected.

For hopefuls, the road to zombiehood starts with a good stretch – the only achy limbs here will be down to rigor mortis. Then a good vocal warm up to get the full range of truly terrifying sounds.

And no good zombie would be seen dead without their signature walk. The school teaches the big four – the fish-hook-pulling-from-the-chin, the knock-knee, the drunk zombie (“This one comes easy to some people” Alex admits) and the traditional dragging leg, for when the decay gets to be a bit much.

“We teach it all here, from the classic Romero shuffler to the really brutal, aggressive 28 Days Later type. My favourite is what I call the savage inhale,” Alex says after particularly bloodthirsty shriek, “but we get all sorts out there, from the deep voiced Barry White zombies to the high-pitched banshee wailers. We get all kinds of zombie here – we love it all.

“The key ingredient for any zombie, though, is health and safety. We’ve got to know they aren’t going to attack players for real!”

By all accounts, it’s scary enough without the threat of actual danger. “In Glasgow, we had something called ‘The Cage’. It was a narrow wire mesh alley, a lot like a cage, with zombies thrashing their arms all around you and a vigilante was pushing infected people in. We had a few people wet themselves.”

Emma Dyer, 25, from inhuman resources (her actual job title), adds “There’s nothing like the look of pride on someone’s face when they’ve managed to make someone wet themselves.”

Like any school, you pass or you fail – and a pass here means a bloody handprint smeared across a certificate. So who are these people who, come the end of days, would sell out the human race for a piece of paper? “You can’t pigeonhole the people that come to zombie school.” admits Emma.

“There’s everything from hardcore ‘I love zombies’ fans, to someone that just wants to run around, to the meek girl that you’re not sure about at the start but unleashes all hell when she’s out there.

“It’s this ragtag bunch of people from all walks of life and all ages. I don’t know why it appeals to people so much or so widely, but you can’t pigeonhole a zombie.”

The original 2.8 Hours Later was a reflection of the unsteady political climate, with the introduction of the coalition government and the promised budget cuts. This year’s sequel, Asylum, sees the country still struggling with recession and tackles issues like surveillance, the extent of control the state has, and the ever-contentious issue of immigration.

“When you first say ‘asylum’ people immediately think you mean a mental asylum,” says assistant director James Wheale, 24, “not the idea of a refugee.”

Co-written by the company’s two directors Simon Johnson, 50, and Simon Evans, 38, Asylum is set in a world where the infection has already taken hold. The government is trying to contain it by setting up quarantine areas for the infected. The undead are not the only ones to watch out for, as corruption and self-interest are rife in the state system. Rather than trying to escape to a government-controlled safe zone, players are trying to escape quarantine.

Inspiration, says James, can come from anywhere. “The original game went through a narrative transformation. There’s so much that goes into it. I have an unusually detailed knowledge of every government’s quarantine procedures for things like bird flu, and how they go about distributing information in times of crisis. These are concerns that run through the game.

“Then getting people to reflect on their relationship to the government – Charlie Brooker does that best. Like in Black Mirror, he anticipates how people will interpret something, then turns it on its head.

We took inspiration from indie video game titles like Thomas Was Alone and Dear Esther, which is one of the most moving, jaw-dropping games I’ve seen. People are getting into stories again.”

And the new quarantine scenario has a major benefit to the actual gameplay. “The game suffered before when you could see other people not involved – you’re being chased by zombies and just see a bunch of people on a night out. But now with the quarantine zone, it feels more real. It’s in quiet areas of the city, which already look like they’ve seen an apocalypse.”

As for survival tips, he has just one. “Research has shown that, in a survival situation, you’re best chance is either in a big group or on your own. We see it play out in the game, we tried to create that dynamic. So that’s a decision you have to make early on.”