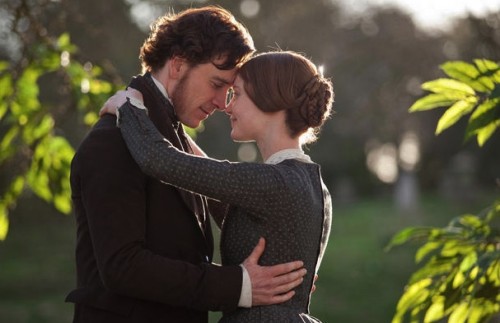 I spend a lot of time thinking about heroes these days. I’m currently writing romance – occasionally tinged with straight up, down and dirty filth – and much of my musing focuses on what makes a believable hero. Obviously, a mucky muser like me jumped at the chance to attend the premiere of the new movie adaptation of Jane Eyre and find out if this Mr. Rochester has what a great romantic hero should have.

Is he the kind of man who sends a frisson of delight, confusion, longing and desire at first sight? Does he make a girl – or boy, for that matter – distracted, obsessed and unable to tame their physical responses (fluttering heart, flushed throat, inability to look someone in the eye coupled with a complete inability not to!)?

These ideas have become so familiar over time that we almost assume they’re constructs, mere literary devices to describe love and passion. They’re not. This is our visceral response when someone strikes our fancy, tickles our instincts (oo-er) or however we’d like to phrase the lightening-strike moment when we spot The One.

I am not suggesting that we can only ever have one The One – contemporary social norms and a bit of good luck mean that The One that gets away or turns out to be loser/idiot/crook can be fairly easily replaced. But even in these complicated modern times when multiple relationships are an option, we still search for The One because we love the rush that goes with it. We thrive on the tension, desire, uncertainty and, yes, the mind-warping fantasy that these feelings can lead to only one thing: the very best sex you’ve ever had. Of course, they can also lead to misery, heartbreak, penury and so on but all that comes later. The great thing is that we keep on looking for the lightening despite any negative experiences we may have had following past strikes.

So, is Michael Fassbender, the new Mr. Rochester, a lightening-strike hero? Judging by the ‘Cor, phwoar, get a load of that’ response from the audience, I think we can safely conclude that he is. The fact that the (at pains to point out that he is straight) director described Fassbender as ‘irresistible’ might be a good indicator too.

In the Q&A after the screening, I asked the director why he’d chosen to emphasize Rochester’s sensitive side. He said that he didn’t, that Rochester is arrogant, cruel and mean in the film. I didn’t see that in Fassbender’s performance at all. Every question he asks of Jane, most of it taken directly from the book – ‘Do you think me handsome?’ – registers as much insecurity, awkwardness and longing (cloaked in arrogance, yes) as her response.

Fassbender is an attractive guy but looks alone don’t make a hero. A looker might pique your curiosity but it takes something more to retain your interest. What works with Fassbender as Rochester is that from the first moment he sees plain, small Jane Eyre, it’s obvious that he’s had the lightening strike – because there’s only one thing a great hero needs and that’s to feel it too…

I should put my cards on the table: I’m not a fan of literary adaptations. I never think they’re as good as the novel, with the exception of The English Patient. So I’m not quite sure what impulse prompted me to respond immediately when Emma tweeted that she had two tickets to the first showing of the new Jane Eyre film at the Bronte Parsonage in Haworth. I think it was the romance of the location.

After a tour and canapés in the parsonage (somehow I’d never associated the Bronte sisters with canapés), we were led across to the Baptist Hall for the screening by an interpreter dressed as Charlotte. It all felt a little cheesy. I wriggled uncomfortably on the Baptist wooden bench and, as director Cary Fukunaga introduced his film by saying he had tried to look at the story with a ‘totally fresh eye’, I wriggled even more. Then, after a brief moment of panic that the narrative was starting in the wrong place, I was utterly lost in the film.

The eye is indeed the key to Fukunaga’s approach. It is a painterly, visually very contained and controlled film. It reminded me of Vermeer’s domestic paintings: extraordinary stillness, lots of horizontal and vertical lines, exquisite lighting, and a luscious, almost fetishistic rendering of furniture and clothing. Rochester tells Jane that he sees in her ‘the glance of a curious sort of bird through the close-set bars of a cage: a vivid, restless, resolute captive is there’ and this is shown effectively in the objects around Jane and the close framing of lingering shots. We see the cage constructed from her first efforts to keep still to avoid detection by her abusive cousin and her punishment of standing still for hours at Lowood. In such circumstances, all that is left to her is to look and she spends a great deal of time in the film looking: looking at Helen, looking out of leaded, curtained windows and over the edge of walled gardens, looking at an active Rochester, at a nude painting outside her bedroom. As with Vermeer, there are tiny references to the outside world through maps, natural history illustrations and pressed flowers.

All this stillness makes for a wonderful build of Gothic tension and heightens each slight noise, facial movement and twitch of passion. Adele and Blanche’s musical interludes are jarring and any movement is startling. The whole audience jumped at the violence Jane experiences as a child and at her first encounter with Rochester. There is touchingly playful movement (and fresh flowers) brought on by newly declared love, as well as Jane’s anguished flight from Thornfield: out in the world at last, but exposed, she lies wretched with the heather quivering around her.

For the most part, the dialogue is drawn directly from the novel, which gives the film an authentic feel. The casting is excellent and Judi Dench injects some much needed warmth and moments of gentle humour. However, I’m not convinced that the change to the narrative order really adds a great deal. Fukunaga said he wanted to give a greater sense of Jane’s dilemma, but the visions she has of passionately embracing Rochester while at Moor House mean we never believe St John (played with appropriate severity by Jamie Bell) is a serious option anyway.

So, was this film version as good as the novel? Well, no, but it had depth and richness and if you asked: did the film squeeze my heart, did it sweep me away with its passion, did it make me shed a tear, then I would have to answer: oh yes, reader, it did.