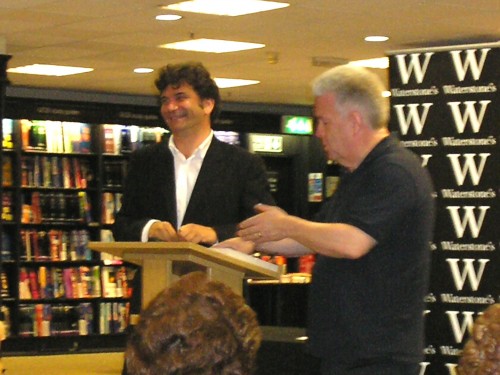 The second part of Mick McCann’s trilogy on The Leeds Movement . . .

Short-cutting my way through town to Waterstones, the pull of the post-gig pints at Whitelock’s quickening my step. Ah yes, Whitelock’s, the home of Jacob Kramer’s Yorkshire Luncheon Club where, for three decades, leading cultural figures gave presentations, talked and got drunk. On planning his new club Jacob said, ‘There are plenty of vital people in Leeds. I believe a (new art) club would succeed here better than anywhere else. For myself, I find more stimulus in Leeds than in London and even in Paris.’ Jacob’s club was an attempt to recreate the previous Leeds Arts Club which for a decade brought together radical artists, thinkers and writers and was the centre of British modernist thinking.

Promised Land has recently been voted Sport Book Of the Year fifty years after one of the greatest sporting books ever written, This Sporting Life by former Leeds RL player David Storey. One of the central themes of Promised Land is how Leeds, Britain’s third biggest city, has punched below its weight, lacked confidence and under sold itself. Tonight Anthony makes a strong case for Leeds United’s and the city’s underachievement.

I know underachievement firsthand; it not only feeds off your past and present but can shape and restrict your future. It sinks its teeth and you just keep losing blood, vitality and purpose. Anthony Clavane is an achiever, an award winning journalist and author, his view of Leeds reflected back to him by his constant travels and a Southern, cosmopolitan elite who distort or maybe clarify his view. Tonight I note a slight shift in his argument, he’s added the caveat to Leeds’ underachievement, ‘at being recognised’ – we don’t sell ourselves.

Anthony leans forward against the lectern, focussing the room, explaining that the title of the book comes from a sign he remembers from his youth, welcoming people into Leeds City Train Station, Leeds, the promised land delivered. He postulates that the optimism and outlook of the city seems linked to the fortunes of the football club. Losing concentration, as I usually do when sitting still, I reflect that Anthony’s probably a bit more expansive and I’m more insular. Anthony mourns the fall of Leeds United whilst I’ve enjoyed the club stripped down to its core, passionate support, there’s few day-trippers at Elland Road. Southerners wanting a day out are more likely to choose Anfield, Old Trafford or Whipsnade Zoo. I’m confident that, during the first home games in the third division, the resolute, committed, electric crowd will never again be witnessed in world football. Yes, it’s a Leeds secret and you can’t argue with the fact that a successful football team is the single most important thing for a provincial city’s reputation worldwide.

Anthony, Ian and the audience touch on the lack of successful bands in comparison to other UK cities and the influence that has on a cities reputation. I reflect that I know nothing of the civic support given to bands in Manchester and Liverpool during the ‘80s and ‘90s but I do know the city councils in Sheffield and Bristol were supportive in a way that Leeds’ was not.

The discussion turns to a notion Anthony describes as Leedsness – nodding to me as he says it; it’s a term I coined in my last book. Leedsness describes an ingrained trait of not getting ideas above your station, keeping your feet on the ground, not showing off and I use it in conjunction with countless successful but modest Leeds folk who avoid (or avoided) the limelight. Perhaps understatedness and self deprecation is pumped into Leeds water, it’s the city that doesn’t brag. In writing How Leeds Changed The World I fought my Leedsness to show a fiercely independent city that gave the world big things and discovered many untold stories, mysteries and intrigues.

Clavane and McMillan’s discussion goes into the flip-side of this ‘modesty’ and Ian uses the word ‘brussens’ to describe a cocky internal confidence, a brash pride in being unpopular, under-rated or outsiders. Anthony thinks we can wallow in coming second, being cheated, feeling persecuted, it’s almost an excuse to lack ambition and underachieve. There’s a gentler but connected Leeds response that I encounter, ‘we know how brilliant Leeds is, we don’t need to brag about it….why tell every other bugger?’ They’d rather Leeds is seen to encapsulate Anthony’s ‘cold, unforgiving, gritty brutal north’ – so well mapped out in the work of David Peace and others – or simply goes unnoticed.

There’s another trait that mingles with this Leedsness of cynicism and a microscopic dissection of optimism or positive claims made about Leeds. After Carlos Tevez’s recent complaints about the lack of life in Manchester, Luke Bainbridge wrote an article for the Guardian in defence of the city. No doubt you could compile an impressive list of that city’s achievements’ but Luke made questionable claims for Manchester such as ‘the home of the industrial revolution’, ‘the birthplace of the ….. suffragette movement…..the co-operative movement……vegetarianism’. I suspect Mancunians will have clapped and repeated the ‘facts’ until they become true. Were I to be as fast and loose with ‘facts’ for Leeds I’d get slaughtered from within. Maybe Leeds is too modest and the ingrained ‘northerness’ which the likes of Liverpool and Manchester seem to overcome more instinctively gradually becomes an inferiority complex.

As I always find at these kind of discussions, people who’ve moved to Leeds from elsewhere (often other major northern cities) sing the city’s praises, one commenting how he chose Leeds, above all others, to bring up his family for the quality of life, including the abundant green spaces – one of many things I think we may take for granted.

On the steps of Waterstones, drawing deep on my post-gig fag, the discussion continues as a small group chats about the Leeds city centre spacials, one says it feels small, the buildings crowded, it doesn’t have the wide roads and spaces of many major European Cities. Another chips in, ‘Yeh but they’ve often got no core or heart, you have to get a bus or walk bloody miles to get anywhere, visiting anything or shopping is a nightmare.’ This last comment reminded me of John Anthony Lake (whose second novel Blowback will be out in November) saying, ‘I’ve been shopping in London, Tokyo and New York, it’s a nightmare getting places, I’d much rather go shopping in Leeds, it’s compact.’ He’s right, whether it’s ‘culture’, retail or leisure you can certainly walk it and in doing so immerse yourself in the city, getting to know it in a way difficult elsewhere. Maybe it’s an intimate city.

I understand the arguments of people like Mike Chitty that the expansion of Leeds shopping areas will just bring in more amorphous chains that suck out finance from the city and region. Surely the City Council is ensuring that independent retailers who bring a vibrant, uniqueness and re-invest in the city are being supported and encouraged? Leeds isn’t just shopping and mainstream cultural attractions, it’s multi-faceted and diverse, it’s economy better placed than any northern city to ‘ride-out’ the current economic malaise and it has a strong independent cultural scene which I think one day we should list.

Three weeks later I’m standing in a book shop at Manchester Airport, I spy a series of guides to the UK’s major cities and pull open the one on Leeds. The intro overviews the city’s attractions and lists the mainstream cultural trinkets ending with the opinion that, outside London, Leeds is the UK’s most vibrant city, the ‘must visit’ provincial destination. It ends with the opinion that for some reason the city doesn’t sell itself, Leeds won’t tell you how exciting it is. During the ensuing holiday people stretching from Manchester to Milton Keynes tell me how all the A-level students want to be part of the local exodus to Leeds.

Perhaps we should lose the modesty or chip on our shoulder, stop bleating about how cool other places are (whilst remembering to steal good ideas) and concentrate on what a fabulous city Leeds actually is – a city of intrigue, mystery and secrets, packed with hidden gems, stories and inspirational people.