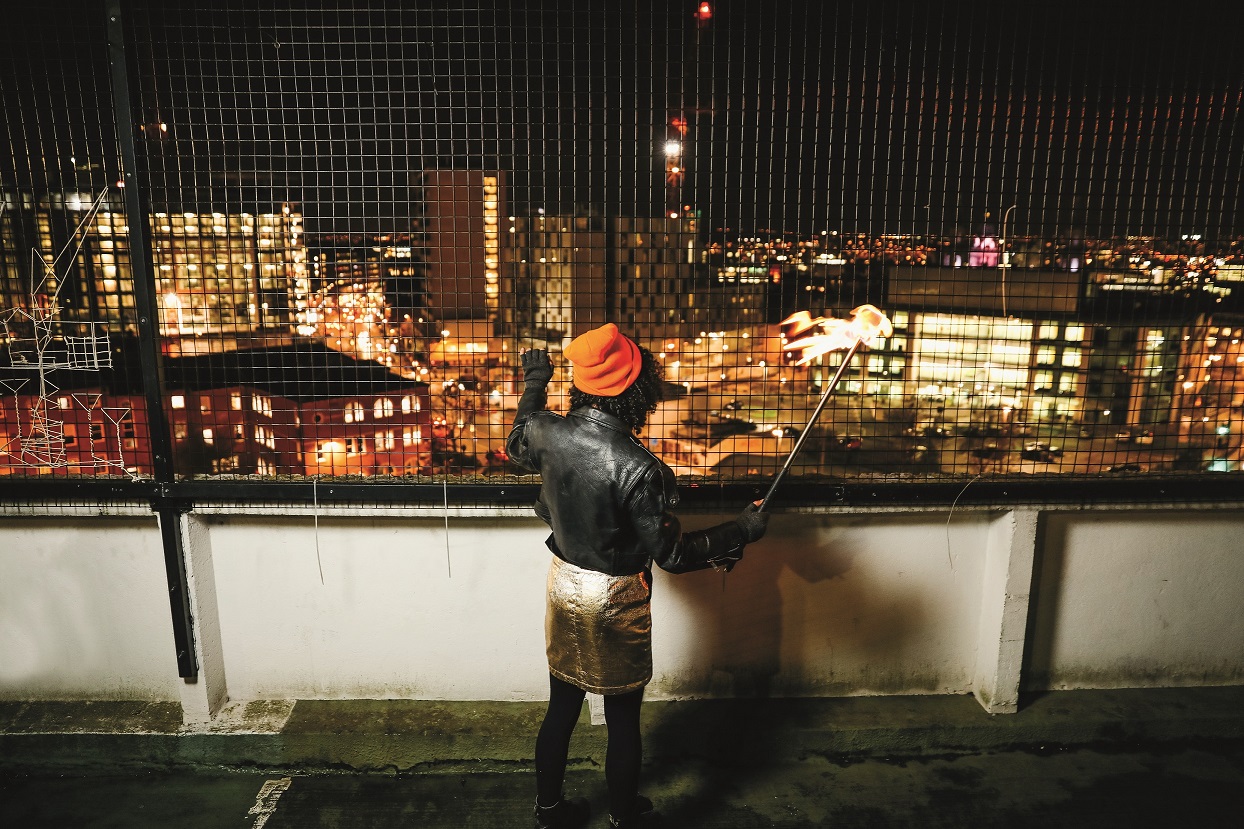 Transform 17, a bold and adventurous programme that celebrates and explores new theatre, comes to Leeds from 19-22 April. This citywide, international edition is Transform’s most ambitious festival to date.

Mixing pop-culture and performance art, interactive adventures, outdoor activist theatre and large-scale visceral shows created with local people, the programme presents ground-breaking international companies and cutting-edge artists from across the North of England. Bold new works have been inspired by a diverse range of current themes and ideas including activism, community collaboration, the digital age, gender politics, and the future of Europe.

Commissioned and produced by Transform, lead production The Darkest Corners is a world premiere created by acclaimed physical theatre duo RashDash. Three-time winners of the Fringe First Award in Edinburgh, RashDash – artists Abbi Greenland and Helen Goalen –  confront violence against women in their most ambitious work to date. Performed outdoors at a secret Holbeck location, this cabaret rally is inspired by Leeds’s radical activist history and its role as the birthplace of the Reclaim the Night movement 40 years ago, and celebrates stories of resistance from around the world. Featuring live music, vivid physicality and inter-generational community companies, this powerful performance encourages audiences to reclaim the night once again.

Having shook up Transform 16, provocative European choreographers, Florentina Holzinger & Vincent Riebeek, return to Leeds by popular demand to open this year’s festival. The duo will perform the UK premiere of their first ever group show, Wellness; a dizzying mix of pop-culture, performance art and dance at the Riley Theatre, Northern School of Contemporary Dance.

At a moment of uncertainty for the UK and its relationship to the European Union, Transform 17 pauses to reflect on Europe itself and its future. During the festival, works by two forward-thinking international companies will be presented at the West Yorkshire Playhouse. machina eX, a group of Berlin-based media and theatre artists renowned for merging computer gaming, theatre and interactive installation, make their UK debut in Leeds with Lessons of Leaking. Set in 2021, days before the people of Germany vote on leaving an estranged European Union, Lessons of Leaking is an interactive show which asks the audience to make choices between the conflicting priorities of democracy, transparency, freedom of speech and manipulation.

El Conde de Torrefiel, one of the most exciting and provocative theatre companies to emerge from Spain in recent years, brings internationally acclaimed show Guerrilla, to England for the first time. A dark comedy about the awakening of awareness, Guerrilla examines the current generation’s thoughts about Europe and how their underlying anxieties about the future preoccupy their daily lives. This epic, visceral performance will feature over 50 local people on stage, as the action unfolds in a dystopian future in three different cities including Leeds.  For the final night of Transform 17, members of the public can also attend Eurotopia; an extravagant art party and audio visual spectacle, curated by Live Art Bistro. At Eurotopia, people across Leeds and beyond are invited to come together to dance away the uncertainty of the future.

Central to Transform’s ethos is the celebration of boundary-pushing creatives based in Leeds and the North of England. New co-commissions include the world premiere of The Believers are but Brothers from Bradford-based writer and theatre-maker Javaad Alipoor. This one-man show, performed at Stage@Leeds, examines a generation of young men who find themselves burning with resentment; and how this crisis of masculinity leads them into an online world of fantasy, radicalisation, violence and reality.

Artist and performer Selina Thompson is creating an ambitious new work, The Missy Elliott Project, which will see her cross two continents over the next three years to imagine what the world will look like for femmes after the revolution. The Missy Elliott Project, also a Transform commission, is beginning in Leeds. In collaboration with a group of teenagers in the city, a work in process event at the West Indian Centre will invite audiences to join at the early stages.  Yorkshire-based Grace Surman will perform on stage with her daughter in Mother Load at Yorkshire Dance, an uplifting and powerful choreographic work in two parts, reflecting upon relationships between parent and child.

The festival will also introduce new Leeds-based artists Sasha Foyster & Grace Hargreaves, winners of last year’s Lift Off and Transform Award, a collaboration with Leeds Beckett University, who will present early material examining what it means to be young, female, working class and living in Yorkshire today.

Audiences are also invited to visit The Festival Centre at Studio 24 on Mabgate, the official meeting point for Transform 17. Designed by creative agency Rabbit Hole, this intimate venue will host DJs, parties and BSL (British Sign Language) interpreted conversations throughout the festival. Open each day of Transform 17, the pop-up bar and café will be a location to kick back and relax.

Amy Letman, Creative Director of Transform, commented: “Transform 17 spans theatres, arts venues, community centres and secret outdoor locations – and presents some of the most relevant, visionary theatre creators from the North of England and across Europe. Whether you’re interested in dancing on stage in a show, joining a party or conversation, or just want to experience stories from Leeds and around the world – we wholeheartedly invite you to be part of this vivid festival.

“This edition is our most ambitious yet and aligns with a wider cultural shift happening across Leeds, as the city prepares a bid to become European Capital of Culture 2023. We want to develop Transform as an engine room for boundary pushing, relevant and cross-disciplinary theatre. Transform 17 marks a major step towards this vision, and the development of a locally engaged, international theatre festival for Leeds. We’re excited to be joining forces with so many incredible artists, partners and collaborators to make this happen.”

Tickets for all Transform 17 events and performances are now available to view and buy online. The official Box Office provider is West Yorkshire Playhouse.