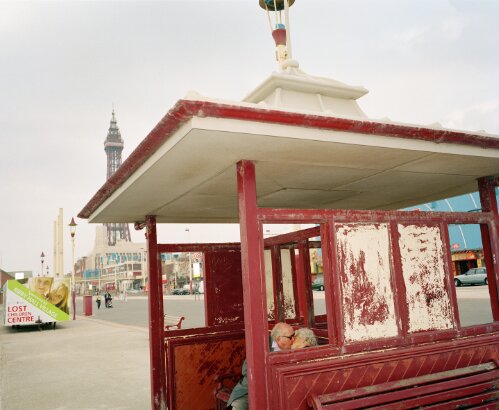 I wasn’t really sure what to expect at “England Uncensored” last night at the White Cloth Gallery. Photographs, obviously. Photographs of England – yes, I can read. But I was a bit worried about the uncensored bit. Don’t we normally censor the nasty, wicked, hurtful stuff? I was a bit worried it might be all gold-toothed, scowling drug dealers down back alleys, burned out Subaru’s in primary school playgrounds, and lots of beautifully framed designer villainy. I live in Beeston where we’d gladly take a bit more censorship of that kind of behaviour, thank you very much.

Of course I was entirely wrong. The exhibition is about the side of England that we pretend doesn’t exist anymore; not so much censored as ignored, forgotten and denied. An England where men don’t use sun cream, women roam around in packs, smoking, eating terrible food, and drinking themselves into oblivion, children share ice creams with the family dogs, and nobody had even heard of wifi. It’s a fantastic place! It’s where I was brought up. And Peter Dench captures it perfectly.

The first photograph you see in the exhibition is the old couple having a bit of a smooch in a shelter with the Blackpool Tower just about visible in the background. A lot of people are convinced the old chap is their dad, according to Peter. Nobody is quite sure of the identity of the lady, however. And that seems to be the tone of the whole show. It delights in the vulgar, naughty, brash, brazen, and often quietly crackers side of England that frequently gets demonised in the anti-smoking, smoothy drinking, five-a-day fruit fanaticism of our behaviour modifying, self-improving barmy times.

The people in these photographs like to enjoy themselves to the limit. They enjoy themselves so much they make themselves sick and probably can’t remember anything the day after. They drink much more than government health warnings say is good for them. And they eat lard. I didn’t spot a single vegetable in any picture, but there’s a noticeable amount of fried food, dripping with ketchup that you just know is mostly artificial colour, artificial flavour, sugar substitute, and a homeopathic dose of tomato.

What’s best about these photographs is that the subjects aren’t related to in a cool, objective manner. Peter doesn’t pretend he’s an anthropologist documenting the strange behaviour of a remote and frankly scary bunch of people. And he’s no participant observer, maintaining a respectful distance while trying to work out the tacit rules of the social game these people are playing. He’s simply having a bloody good time. He loves this lot. And he wouldn’t have got many of the photographs in this exhibition if the people in them weren’t comfortable. 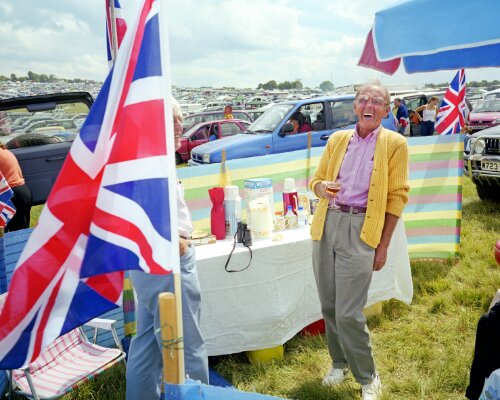 Take this bloke. You have to love that pink shirt, yellow cardi combination, he’s quite the dandy. You don’t get a laugh like that – he’s in danger of losing his false teeth he’s laughing so hard – if you don’t have some kind of natural connection. It definitely looks to me like there’s a shared moment of hilarity, the photographer is chuckling along too.

There’s not a mean moment in the whole exhibition. Even when he’s photographing people who look as though they eat Asbo’s for breakfast he doesn’t make them look threatening or alien in the least – and if you get a chance, check the skinhead in the pub in Lancashire, totally peacocking and putting on a performance of macho daftness, but he doesn’t come across as a thug. There’s a couple of hen party pictures that could have gone for easy, nasty stereotypes (think Viz) but manage to remain good humoured and gentle. Even the woman drinking a pint of cocktail from the biggest penis shaped glass I’ve ever seen – I suspect she and her mates milked every permutation of obvious joke from that improbable vessel – is treated with respect. You don’t feel she’s an object of ridicule, you just laugh along with the ridiculous situation.

Last night was a fund raiser for St Gemma’s hospice, and all the proceeds from tickets and the auction of work went to a great cause. The exhibition is up for seven weeks, starting tonight, so get along and see what you think. And if anyone fancies writing a review of the other work in the gallery then you know where to get in touch.