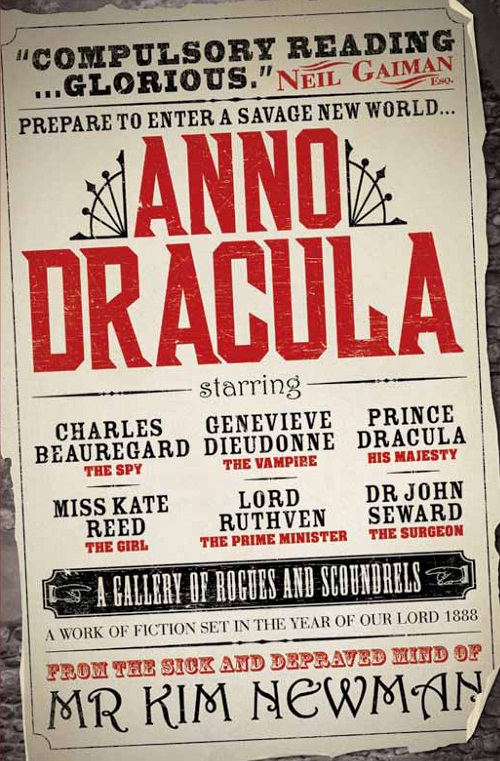 To say Kim Newman is a bit of a horror fan is a bit like describing The Pope as having a vaguely religious bent. The author of such books as Nightmare Movies (one of the seminal works about horror films), a prolific and insightful film critic who has spent years watching straight-to-video fare to find the one or two gems hidden amongst the swathe of blood drenched dross and a sometime BBC presenter showcasing a esoteric selection of terrifying cinema, Newman’s reputation as one of the most knowledgeable horror experts in the UK is well justified.

It’s his knowledge and love of the genre that has led to Anno Dracula, a heady tale of gothic horror and political intrigue that looks at what would happen if – at the end of Bram Stoker’s Dracula (and if you haven’t read it, stop right now, avoid the upcoming spoiler and come back when you’ve done) – the Lord of the Undead were victorious and the world were a very different place.

It’s 1888 and Queen Victoria is married to the man known as Count Dracula. Becoming a vampire has become the new ‘in-thing’ with society increasingly choosing to embrace eternal youth. But vampires have an enemy in the Silver Knife, a diabolical murderer who is brutally mutilating vampire girls. Enter the young – forever – Genevieve Dieudonne and the dashing Charles Bureaugard – who still remains one of the ‘warm’ – who investigate the case. Soon it becomes clear that there is much more to the eye than is going on. As Dieudonne and Bereaugard become close to the truth – and each other – it soon becomes apparent that the future of England is at stake.

For fans of vampire stories and some of the classics of Victorian literature, there’s plenty to recognise here: aside from Stoker’s characters you also have familiar figures from the eclectic likes of Conan Doyle, EM Forster and even the exploitation film classic Blacula making a cameo appearance. It’s fun playing spot the reference (and this new updated version of the book sees Newman give more details about the voluminous amount of cultural nods he makes) but Anno Dracula is far from a lazy collection of other people’s ideas. Newman has managed to craft an intricate horror thriller that manages to balance some fine moments of horror alongside a plot that genuinely keeps you guessing. Both Dieudonne and Bureaugard are engaging heroes (each one seemingly representing the wildly different sides of Victorian society: the buttoned up and reserved versus the emotional and forthright) whilst the sense of menace created throughout is tangible.

This re-release includes some interesting insight into how the book was originally created and the original conclusion to the story. For those who have yet to try Anno Dracula, it’s a worthy purchase whilst if you’ve got a dog eared copy knocking around, the extra information may just make it worth buying again

Anno Dracula by Kim Newman is published by Titan Books and is available now.