Laura tell us in less than 50 words about the pies you have your fingers in!
As well as running and designing for Vamped Designs I also manage the  Factory4 Creative Workshop in Sheepscar and I’m in the process of collaborating with some of the coolest new designers in Leeds which will come together under the name of Pixel Dribble – website still under construction preview can be seen here.

Aswell as my design work for Vamped and Pixel Dribble I’m currently in the process of co-ordinating a series of new Creative training packages at the Factory4 workshop. They are completely free for creative companies. It’s turning out to be such a great project I love working around other creatives and to being able to help people to get further in their practices is so nice.

One of my designs with Vamped- Hula, has been quite popular so I’ve just been busy working away on orders for them I have recently completed an order for Zizzis restaurant in Bluewater and I’ve just completed another order this week  for a company in New York who are doing a shop refit in one of the biggest shopping malls in Doha Qatar- which is so exciting- It’s amazing to think that just in a year and half of graduating I’ve had international sales- well just one- but its still international!

Aswell as working on Hula I’ve recently produced a range of seating called Chipper. Chipper is created from a new type of shipping pallet which replaces the old style pallets we all know. The pallets are created from damaged logs, wood waste and other wood by products. I’ve taken these quirky little pallets and transformed them into an exuberant range of sustainable seating.   Chipper has been stylishly finished using a range of sustainable fabrics produced by Camira including a fabric called sting plus- the ultimate environmental fabric created from stingy nettles!

Chipper hasn’t really had as much attention from me as late so I’m hoping to start giving them a little more attention soon. 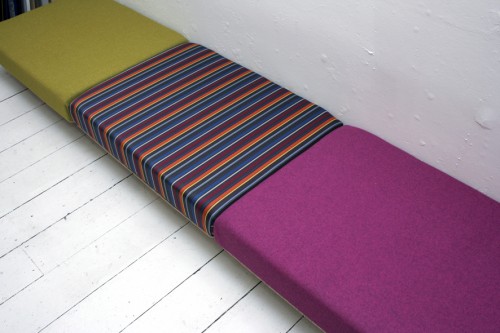 Where do you find inspiration?

That’s a big question! I’m inspired by so many different things- at the moment I’m feeling really inspired by the people that I have around me- I get to be around some of the best creative’s in Leeds by being in the Factory4 workshop and by having my studio in Umbrella I’m a very lucky person!

I’m really inspired by Found objects, materials and patterns- I’m such a tactile person if there’s anything that looks a bit different or has a cool colour I have to touch it!

What’s it like working in a creative collective space?
It’s a really great space. I have a big studio to create all my work – they even have caravans as meeting rooms on the ground floor- and a street for people to work in!

It’s so exciting- I love my studio and I love being around so many other creative people. I love the caravan’s downstairs- if Vamped ever gets big I would like to just have a caravan for an office as well as my studio –  completely over indulgent but it would just be so cool!

I’m really looking forward to exhibiting alongside everyone on the 25th of February at the grand opening of the studios – it looks as if it’s set to be a really good night! (All Culture Vulture readers are most welcome to head on down from 7pm for drinks, cool tunes and nibbles) 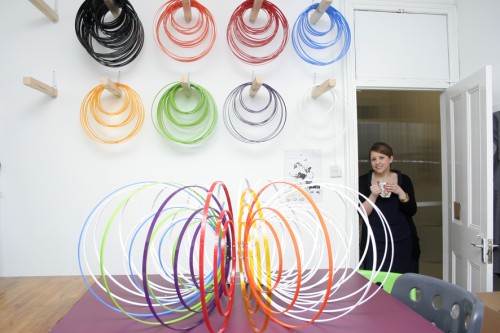 Hula has become the flagship product for Vamped Designs. Hula was first created as part of my final year project in my Design degree at Leeds Met and has since gone from strength to strength – being exhibited in numerous shows in London and even auctioned in Christies auction house for the charity Heart and Design selling alongside the likes of Tom Dixon, Jaime Hayon, Marc Jacobs and Karl Lagerfield.

Hula is a large pendant light with a simple design– it is made from 20 long strips of acrylic plastic hooped into loops that are mounted on a central column. It is a feature piece of lighting that as standard comes in multi coloured but hoops can individually be changed allowing the product to be tailored made for its environment or branded to a colour scheme.

Tell us more about why we should be couch potatoes in March…
Well there is a really great BBC TV program starting in March called “New Brand” in the 4-part series Jo Malone, one of Britain’s most successful female entrepreneurs will give budding entrepreneurs the chance to take a product they have created to new heights.

Hula was lucky enough to be selected from 100’s of applicants to be in the final 14 of the studio day within the home and garden section of the series- and it even down to the final four – but unfortunately Hula was too big a project for the 10 week filming schedule, So with the magic of post edit they will take my (probably stupid looking) celebratory face out– Might not be such a bad thing!

It was such a strange experience of celebrating and then commiserating a few weeks later! It was a great thing to do for the publicity and hopefully it will give Hula a bit more exposure- Hula was hailed as the “next chandelier” from both Jo and her millionaire business advisor so that was pretty cool!

Who do you really admire and why?
Such another big question! Well I obviously really admire past and present designers but the one person who I really admire who sadly passed away in 2008 is Petra Levi she was the founder and organiser of New Designers from 1983 to 1991. Over 25 years ago Europe’s colleges were producing and abundance of highly skilled and original designers but at the time shops and manufacturers weren’t very interested in the rising new talent and all these designers makers had to go it alone.
In the early eighties Levi decided that she would fight the corner for these new Designer makers. Her idea was to provide a platform for new graduates in art and design to show their work to talent scouts from manufacturers, shops and design agencies, along with the media and the public.
New Designers has now grown to be the highlight of the graduate year and the propellant of many of the new designers that are making it in the industry. New Designers was just a really small part of her long and prosperous career and I could probably talk about it all day but I won’t! You can read more here though

Lastly if you were benevolent dictatoress of Leeds what would you do first?
Firstly I would create a great big huge creative cluster in Leeds with Studios, workshops and retail space for the Creatives. Another part of my final year project aswell as my range of furniture/lighting at University was a hypothetical project on the creation of this type of destination for Leeds. Since leaving I have kept this passion for the local area and feel that Leeds is definitely in need of more of a diverse creative culture with more opportunities for existing and emerging talent. A little bit like the Craft and design centre in Manchester but on a much bigger scale like the Custard Factory in Birmingham! I would also make sure that Leeds had a Design Week every year like the one in London with lots of exciting things happening around the city!

Images courtesy of the gorgeous Lord Whitney (who are also becoming pretty ubiquitous!)