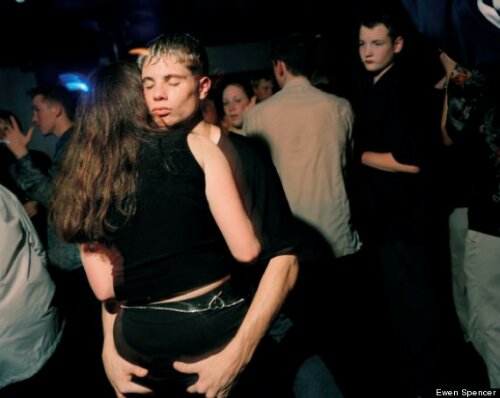 According to the blurb advertising England’s Dreaming, the Ewen Spencer photography exhibition at the White Cloth Gallery, it is,

a strikingly intimate, somewhat shocking and often disturbing display of what goes on when parents are absent and youths are left to their own devices.

On the evidence of these photos what teenagers mainly get up to is boozing and bonking – looking blitzed when they’ve had too much of the one, and terribly badly done to when they can’t get any of the other.

Take the three images that feature in the gallery brochure. They form a moral narrative, almost, a kind of contemporary Gin Lane. Except there’s no moral drawn. This is just the way it is.

Notice the ubiquity of the bottle. Alcohol is a fetish object – fetish in a non-smutty, technical sense. I know I generally object to art theory gobbledygook, but I can never resist a bit of Lacanian loopiness, so here’s Zizek explaining the fetish object as “the embodiment of the Lie which enables us to sustain the unbearable truth.” (I love how the Lie has been elevated into a proper noun, with its own definite article, making it Really Serious.) The unbearable truth would seem to be that being a teenager is a bit grim and the best way to get through it is by getting out of it. 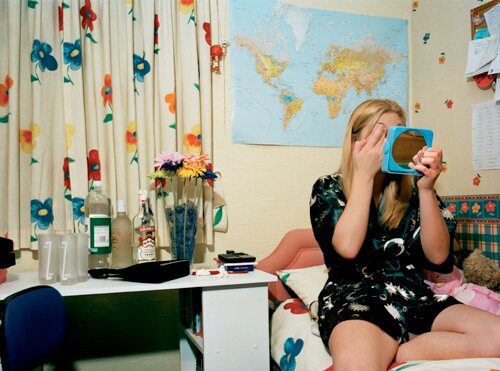 In the first photograph the bottles look decorative, hardly opened, standing just beyond arms reach. A teenager sits on her bed in a room that, except for the bottle, is filled with signifiers of childhood and innocence – the cute curtains, the school map, the vase of pretty flowers. She is putting her face on, making up the self she wants to present to the world. The camera captures an obviously intimate moment but there isn’t a sense of intrusion – she keeps her identity hidden behind a mirror – and the parental presence is implied. 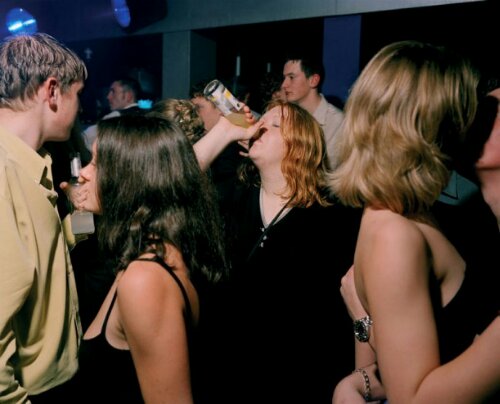 In the next photograph the bottle is in the centre of the shot. A guzzling teenager grips a bottle of lager – or the lager grips the teenager more like. She’s much more interested in the contents of the bottle than she is in her fellow party-goers. The alcohol is all the company she needs. Teen and bottle are quite literally attached. Looks like one of those evenings when someone will chuck up in the back of the parental taxi. Dad will not be pleased. 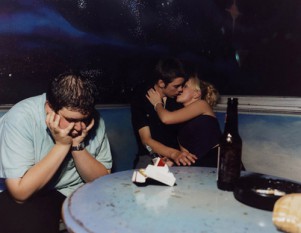 The bottle moves to the right in the next photo. An empty. The end of another wasted evening. Two teens have exchanged the oral pleasures of sucking on a bottle for the equally intoxicating euphoria of snogging. Their luckless companion is left to wallow in teenage angst. His head is in his hands, the universal mark of dejection, self-loathing and shame – and also a sign of having drunk so much you lost control of everything below the neck. The alcohol didn’t work its magic for him this time, the fetish failed. He has to face the cold, harsh reality that the universe does not centre around him and his particular requirements; growing up is simply learning the lesson that sex isn’t on tap and after a party someone always has to sweep up the fag ends and take the crap to the bottle bank. Poor kid looks like he needs his mum.

Ewen Spencer has said that young people have been given a lot of power and it can’t be taken back. That may be true. But teenagers have always been puzzling and problematic, and society in general tends to swing between repression (make them do National Service, that’ll sort the blighters out!) and indulgence (it’s self-expression man, give the inner child another sweetie and a can of coke.). The trouble isn’t teenagers being teenagers, it’s adults not being adults. Abdicating adult responsibility. Adults behaving like big babies … but that’s a different blog post.

England’s Dreaming is on at the White Cloth Gallery till 13 Nov. How about we get some teenagers along to review it?