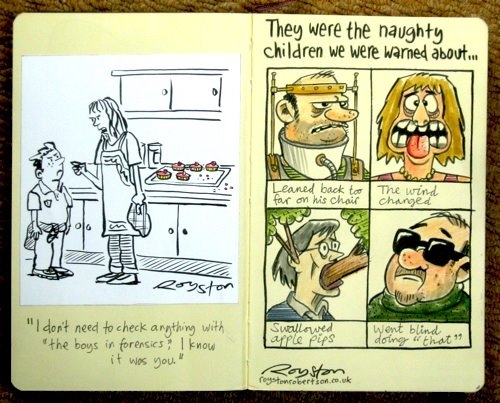 Who are you and what do you do?

I’m Royston Robertson and I am a full-time freelance cartoonist. My cartoons can be seen in magazines such as Reader’s Digest, Private Eye, The Spectator and so on. I also do commissioned work and have drawn cartoons for the likes of BBC Magazines, Oxford University Press, and the Green Party, among many others.

What are you currently working on?
As you often have to think ahead in this job, I’m trying to think up Christmas cartoons. In August.

What inspires you?
Creating magazine gag cartoons, I find that the inspiration is all around me. You get ideas from the things people say and do, items you may see on the TV, in the papers, new phrases and buzz-words, and so on. It can be hard to switch off and relax sometimes!

What theme did you receive and how was it responding to it?
I contributed to the Moleskine doing the rounds of the Professional Cartoonists Organisation. Our theme was “Naughtiness”. I think some of the others went for Carry-on style sauciness, but being a parent, with two young kids, I went for a naughty children angle. I really enjoyed it, as an exercise. I drew a new version of a joke cartoon published in Prospect magazine a few years back, and I created a strip specially for the Moleskine, called “They were the naughty children we were warned about …”

Who would you like to see get their hands on a travelling moleskine?
Robert Crumb He’d certainly have more than a little fun with the “Naughtiness” theme 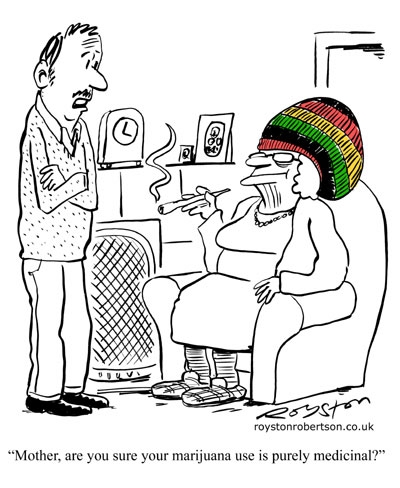