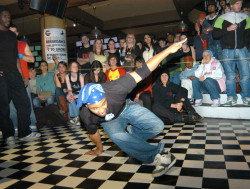 For the second post in my series about the Leeds music scene and the little bits, people, organisation, events and stories waiting to be heard, I’ve ventured into unknown territory: the local Hip Hop scene.

The Hip Hop scene is one I’ve never seen rise to the surface within the city centre.

There’s been other scenes in plain view since I started discovering the city for myself in 2004; we had places like Soho that were the place to go for your neon corduroy street-sweeping trousers and the likes of Hellraiser to visit for your Emily Strange apparel for your ‘mosher’ phase. We had Ryan’s Vintage, Blue Rinse and Ace to drop into for a rare vintage find that would increase our kudos in the indie scene, and we had the magnetism of the Corn Exchange which meant that you hung around in the area even if you had no desire to actually purchase anything.

For the generation before me, I anticipate that the little signs that embody a music scene were just as prevalent for the Hip Hop scene at its height. With the hope of reducing my ignorance, I got in touch with Tony Green of Fresh Jive to find out about the development of Hip Hop in the city.

Fresh Jive has a significant history, from the early days of being a live music and club venture at The Faversham, it later developed into a cultural event that flew bboys in from all over the world. Later, the addition of Shane Fenton to the team encouraged the concept to deliver more than events to gratify the organisational team, it was there to represent and participate in a culture.

When I asked Tony how you knew someone that was part of the Hip Hop scene, it wasn’t an easy question to answer. He used Plan B as an example of being the ‘real deal’ due to his influences and his manner and noted that when you’re really ingrained in the industry, you instinctively know. Though, at times, he commented on the fact that he’s still discovering more and more about the culture even after 16 years working within it (and a lot longer as a fan).

Like any subculture, Hip Hop has had some of its rituals and values appropriated by the mainstream and certain aspects have been filtered out from our distant view as a bystander. The ‘uniform’ of a Hip Hop fan is no longer obvious with hoodies and the like being staples in most people’s wardrobes.

In addition, The bboy culture in the UK (and America) disappeared for a while, it’d become redundant. The news that breakdancing had had its day didn’t reach the rest of Europe and as the phenomenon returns to our shores, the Fresh Jive team have created the Dirty 30s, a competition for the Hip Hop pioneers in their 30s to showcase the body movements and techniques to a wider audience: those that were there at the start and those uncovering the scene for the first time. Dirty 30s has now been picked up worldwide and it’s amazing to see Leeds contributing the history of a culture that started in some of the roughest areas of America.

The current generation of the Hip Hop scene are split across additional subcultures; some of them are interested in the heritage of the scene and embody the original ethos. Others are focussed on the present day and their interpretations of what Hip Hop is and what they feel it should be. They don’t want to look back, they don’t want to be inspired; they want to be inspiring.

In essence, it’s the battle you’d expect from a genre that’s still reasonably young (40 years of Hip Hop was celebrated this August); it has an inner battle of moving forward and trying to maintain its identity whilst recognising that there is very little left to be done that is truly original.

It’s impossible to justify an entire genre within one post, so I won’t. There’s much more to the Leeds scene than I’ve been able to cover in these 600 and odd words and there’ll be further posts exploring current organisations and events that exist within Leeds Hip Hop culture.

Kay’s day job is to ensure that the annual music festival, Live at Leeds goes ahead without a hitch, she regularly tweets the @culturevultures account with robot related links and she blogs about the little things to make you smile on Cheery Little Thing.