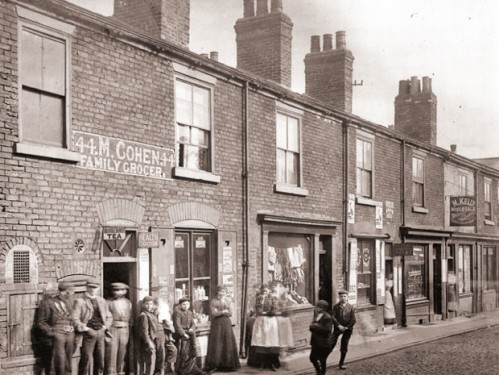 “Ask a Jew a question, and you’ll get four answers in reply.”

So a group of students at Leeds University were told when they began a research project tracing the narrative of the incredible journey made by the city’s Jewish community. Back in September, four history students signed up for an elective called ‘Research Collaboration and Enterprise: Race, Religion and Politics in Yorkshire’. The guiding purpose? To take its students out of the walls of the university and into the community, collaborating with partners across the city and beyond, and creating a public facing exhibition.

The culmination of their work is on show on Tuesday April 17th at The Zone in Moortown. This is one of the many projects Leeds students have been working on of late in association with the university’s friends and partners in town. The team has interviewed figures from across the Jewish community, including Simon Glasse, writer and producer of ‘The Last Tribe’ which premiered at the Hyde Park Picture House last autumn; Raina Sheaf, leader of The Zone youth group; Helen Frais from Makor, the Moortown Jewish community centre; and proud Jews from teenagers through to their great-grandparents.

Their project comes at a defining moment in the story of the Leeds Jewish community. Local-born writer Anthony Clavane’s impassioned symphony ‘Promised Land’, the award-winning book which weaves together the threads of Leeds history, Leeds United, and the city’s Jewish community, is to be made into a play produced by Red Latter Theatre, showing at The Carriageworks Theatre in June.  ‘The Last Tribe’ meanwhile was premiered as part of the Leeds International Film Festival last November, warmly and movingly telling the rags-to-riches story of a community once languishing in The Leylands and Chapeltown, suffering through poverty and even anti-Semitic violence on our own city streets, growing to build self-made empires that would come to define Leeds and help establish its cosmopolitan status.

Yet whilst the community is telling its extraordinary story, it is declining in numbers, as in recent decades Jews have moved from the Leeds suburbs to Manchester, London and beyond in ever-increasing number. As Fiona Grayson, one of the Leeds students working on the project and on this Tuesday’s exhibition, explains she has found, “There are some in the community who long for the past, when the community was close-knit and interactive.”

“Hence, the evening aims to bring these opinions together, so that as a group we can channel this information and work alongside Makor to show where the community’s strengths and weaknesses lie.”

Fiona and the team are eager to invite the wider Leeds community to engage in the project, and want to know what in the Jewish narrative you are interested in, what they could put to their panel at the exhibition this Tuesday. Tweet the group @LeedsStudentJR.

Doors open for this promising exhibition at The Zone in Moortown this Tuesday 17th April at 7pm, with discussions beginning at 7.30pm.