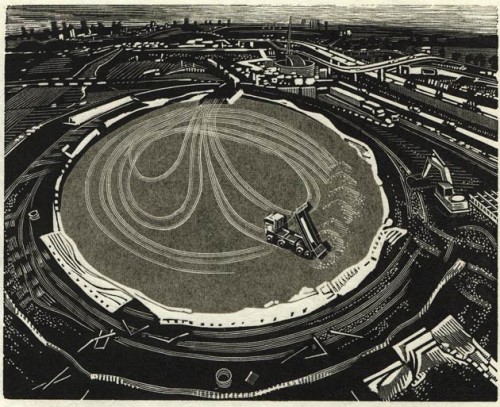 Paper, slate, glass, and even maps become the medium on which Anne Desmet’s collection of 30 prints and engravings, ‘Olympic Metamorphoses’, documents the construction of the 2012 Olympic site near her home in East London.

Through capturing the site from an aerial perspective Desmet draws attention to the intricacies of these large-scale buildings. The collaged prints best capture the idea of construction; their fragmented style seems to reflect the building process. The largest, ‘Interchange/Transformation’, provides a flash of colour in the exhibition and although hard to distinguish up close once you take a few steps back the greater picture can be seen, much like moving away from a large building. In other prints the Olympic buildings are ‘glimpsed’, forcing the focus onto a particular area and making you realise the detail in her study of the site.

The prints and engravings layered over maps most effectively evoke a realisation of the changing landscape. They create a sense of the history now lost in this area, the impact of the Olympic development on the London streets. The effects of light achieved in a black and white print of a derelict warehouse bring a beauty to the original landscape of the Hackney site, highlighting the destruction that is often a result of new construction.

Desmet’s depiction of the varying stages of construction, from beginning to completion of the Olympic Stadium and Velodrome, is undoubtedly interesting. Her focus on these circular structures relates to her previous work on the Colosseum at Rome, and one print in the exhibition, ‘Rome in London’, creates a particular parallel between these sites that would not immediately come to mind. Her record of these various stages is both unique and insightful. Desmet has even referenced the archaeological excavations that took place with one engraving ingeniously printed on a tiny pebble, simply titled ‘Dig’.

Desmet uses some unusual, yet interesting, mediums for print. Razor shells offered a translucent effect – a piece entitled ‘At the End of the Day’ fittingly appeared as if seen through a haze, yet became stronger at a distance – while another entitled ‘Fragile Hope’ worked well on these equally fragile shells. The artwork in this exhibition not only engages with the physical construction of the Olympic site but also with the ultimate purpose of these buildings. ‘Potential gold’, featuring delicate gold leaf, is again a nod towards these competitive hopes, to the social and cultural element of these buildings, adding another dynamic to Desmet’s depiction of an ‘Olympic Metamorphoses’.

It is the abstract, fragmented nature of these images that most effectively conveys the building process and the changing landscape of the Olympic site. ‘Olympic Memory’ was one of my favourites. Spread between a number of glass cubes the prints become disjointed and also blurred as they are viewed through the glass. However, as you continue to study this artwork the picture begins to take shape, a characteristic that makes the print evocative of memory itself. The exhibition also includes ‘Olympic Shadows’, Desmet’s diploma work for her election to the RA. It is a strong black and white print, the minute lines and dots of the engraving clearly picked out in the ink. It is this texture and intricacy that shows the skill in the creation of her pictures.

As a result I feel this is an exhibition that requires a closer look to be fully appreciated. I admit that on first walking in there was no immediate impact, no great impression. However the more you look the more interesting the artwork becomes. The film shown alongside this exhibition, documenting Desmet’s work, certainly helps you to appreciate the effort and skill that goes into each piece and the motivation behind this project. Through ‘Olympic Metamorphoses’ Desmet has effectively chartered the development of the whole construction process surrounding the Olympic site, from the original landscape to the present day transformation, in a way that holds great resonance. Her artwork magnifies the element of construction, finding a beauty within the intricacy of this, but it also embraces the social impact of this transfromation alongside the visual metamorphoses.