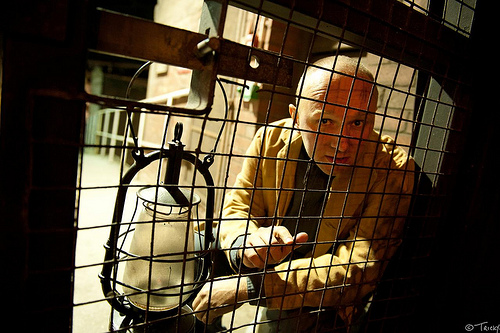 One of the great things about Leeds Light Night is the sheer diversity of stuff going on around the city, but it’s a double edged sword in that it’s ever so easy to miss amazing things, so I thought I’d do a little write-up on what, for me, was a highlight of the evening that shouldn’t go un-noticed.

Moments Designed for a City by the West Yorkshire Playhouse (written by Chris Thorpe) took place across the city, with a series of “interruptions” – little stories performed by actors that you could view if you knew where to look and had a little flashing badge to show you were taking part. Incredibly intimate – it was suggested you go around individually/in pairs, and was a bit like having lots of small plays performed just for you.

To start the piece you needed to be given a flashing badge in the foyer at the art gallery, then find the video piece “Poised in the infinate ocean” upstairs. The video involved 3 projections and a voice-over while at the same time an actor in the room was also delivering a narrative that at times seemed to link up with the voice over of the film, and other times not. The 2 narratives at the same time made for both a confusing and interesting experience. At the end of the video, maps of the city centre were handed out marking the location of the rest of the performances and little descriptions of how to invoke the performance – eg “Go to starbucks on the North Concourse at the railway station. Take a seat at the table with the white flower.”

Each piece was a self contained mini story, so it was up to you which ones you went to and in which order – you could take them in as you carried on the rest of light night, or in our case we were enjoying them so much we went from piece to piece. All of them were brilliantly acted, and for some the actors ignored you, leaving you feeling invisible and a little voyeuristic!

We didn’t manage to catch them all (much as we would have loved to), and I only took photos of a couple of them (it was a strange experience, actually asking if it’s ok to take photos wasn’t really an option as it would have ruined the performance, and some felt so incredibly intimate that it would have felt wrong to take a photo without first asking), but here’s a few of the ones we saw that we really liked (descriptions are a little hazy – I didn’t take notes and had a few beers at the end of the evening :-s) :

(photo at the top of this article) – a man explains to you that this is the entrance to an underground city, built for if there was a disaster. Part of his job was to phone another similar base in Kazakhstan once a year at a given time “and for one fleeting moment the dialtone stops and we can hear each other breathing. We never actually talk….”

Remembrance (at a phone box outside the henry moore institute )

This was really quite innovative – if you entered the phone box it started to ring – on answering, a young-sounding guy urgently tried to tell you about how he first met his girlfriend at the war memorial outside the phonebox, and how he was devastated at losing her in a tragic accident. At the end you were asked to switch on the small torch in the phonebox – it turned out to be an ultra-violet light, and on every concieveable space within the box the girlfriend’s name had been scrawled in invisible ink that only showed up in the UV light.

Here you were instructed to take a seat at the bus stop – a young, solemn girl was stood next to the stop with a case; an anxious young guy appears, thrusts a note into your hand and motions for you to give it to the girl. She reads the note and turns to the guy, at which, in a nice twist they begin to passionately argue in sign language – it’s obvious they’re young lovers and she’s leaving, and that he desperately wants her to stay (I think I made out “no more bullsh*t!” ?). They make up and walk off together into the distance (impressively far I thought, before they turned around to make sure we’d left!) 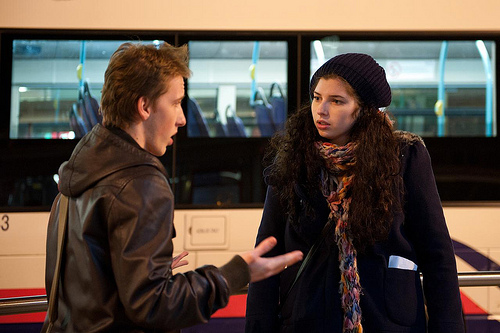 Starbucks (outside starbucks on the north concourse in the train station)

Instructed to take a seat at the table with the white flower, once you do so, a mother and daughter at the table next to you start talking about the ex husband/father – the implication being the girl lives with the father and the mother is jealously wanting to know what it’s like/if he still mentions her. 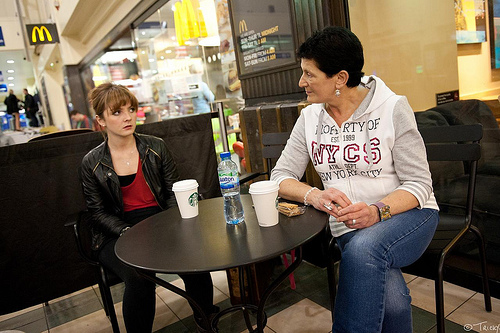 Foreign Love (in the Library)

Instructed to go to the foreign language section where “she’s waiting”, you browse the isle before noticing a gap low down in the books. As you crouch down a girl on the other side of the gap looks up from her book and speaks passionately to you about something in a foreign language. 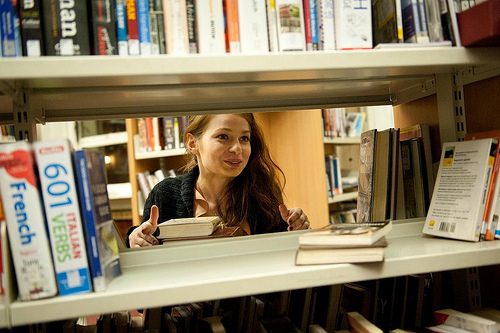 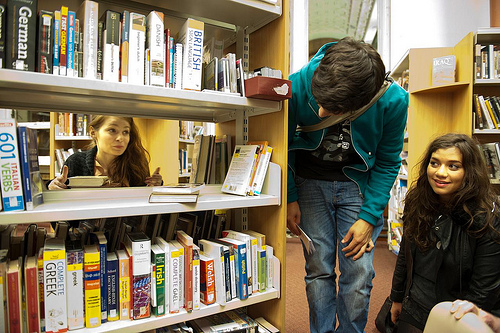 Room with a View (a hotel room on the 11th floor of Mint Hotel at Granary Wharf)
On entering the room, a woman is stood by the window staring out at the city, with another woman sat on the bed in a dressing gown. It becomes quickly evident that the woman by the window is about to tell her husband that she’s leaving him (for the girl in the robe), and is scared about if it’s the right thing to do – will the woman in the robe eventually leave her for someone else? I think this was by far the most powerful piece we saw, and didn’t feel right to try taking some photos – felt quite strange silently being in someone’s hotel room seeing all this acted out without any acknowledgement of you being there!

15 Years of Books (in the Library)

Cleverly done, people had to take it in turns to enter a corridor in the library, with a woman sat on a chair at the far end, and a note pinned to the wall at your end – you are instructed to read the note and look up where it says to do so – and when you do the woman at the end acts out something related to what you’ve just read. Touching and quirky! (no photo of this one – wish I had done as it would have made for a beautiful shot)

I really wish i’d managed to see all of the pieces, and it was such a beautifully concieved and executed idea – it’d be wonderful if the playhouse ran this again or tried other similar pieces in future – if they do, be sure to check it out, as it made for a fantastic evening.

Finally a quick mention of the impressive looking marrionette judge in the court house by Pyramid of Arts (a re-creation of the tests that saw people with learning disabilities sent away to special institutions – members of the public could stand in the dock and be asked various questions (some of them suprisingly tricky) before being sent away). 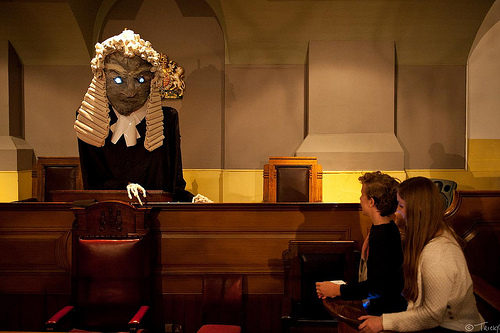 And a beautiful little sculpture made out of a book that I spotted in the library: 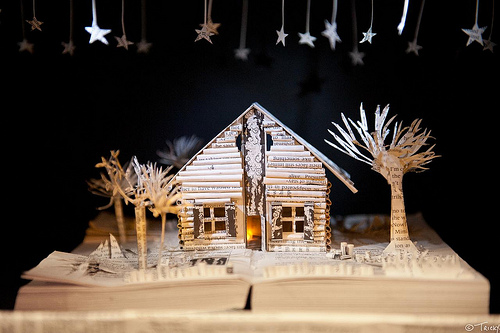 You can find more of Rick’s photography on his portfolio website, and is on twitter as @sovietuk