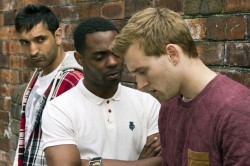 Picture by Will Corder.

Nick Ahad is best known as the forthright arts critic on the Yorkshire Post never afraid to speak his mind, but unlike most of his contemporaries he is also an aspiring playwright himself.

Now he’s putting his own head on the critical chopping block with his new controversial new play ‘A Muslamic Love Story’. There’s likely to be a queue of his artistic victims forming round the block at Bradford’s Theatre in the Mill, so is he prepared for a luvvie backlash?

“I’m fully aware writers and directors might want to give me a good kicking, but I’m baffled when people say you’re a theatre critic so how can you write a play? It just seems odd as I wouldn’t say to a painter who decided to be a sculptor so how can you possibly do both?

“I’ve been training as a writer and director for five years but some people think that as a theatre critic I think I could do better, and nothing could be further from the truth.

“I’m lucky enough to go into rehearsal rooms to see great artists at work and talk to writers so I’d be a fool not to pick their brains. But I’m a baby as a playwright and I’m just starting at this despite the fact my first writing course was in 2006 at West Yorkshire Playhouse.

“My motivation is I see theatre as a really exciting medium and I’ve got things I want to say about where we are and who we are, which journalism doesn’t give me the opportunity to express.”

Fair play to our artistic poacher turned gatekeeper as he is certainly putting his name on the line with a new work examining sexuality, race and cross cultural bigotry that is likely to wind some oversensitive souls up.

“It’s about a mixed race gay couple, there’s a white guy and an Asian guy who is struggling with his sexuality and has left the family he loves behind. He’s having a lot of difficulties leaving his partner Dan, and Dan turns to his ex-boyfriend who happens to be a black guy called Tony.

“They have been separated for a couple of years and Tony has been influenced by the English Defence League and become very Islamophobic, so when he comes back into Dan’s life they all end up in a room together. It’s the classic thing of putting the people in the room together and turning the pressure up.”

Ok, so pretty tough issues are being covered in this play, but isn’t this just My Beautiful Launderette 2?

”It’s a interesting point, but I’ve not done it consciously and I think what I’m exploring are some really relevant issues and more so than they were then. I think what My Beautiful Launderette was exploring, which is really relevant today, was Islamophobia and homophobia within ethnic minority communities.

“What you have to do is tell the story, and if politics with a small or big P dominates the story then you’ve lost it as it’s about telling a good story.

“That said, post 9/11 Islamophobia is rampant through Western Europe, and the world I’m writing the play in is set in contemporary Britain and around the rise of the EDL.”

Part of the thinking behind this bold three-hander is the bizarre spectacle of someone from a minority community speaking for the EDL.

“One of the big inspirations for when I saw that an Indian Sikh guy was really quite high profile in the EDL, and I thought what is going on here. I grew up in the 80s and I got lots of name calling regularly, but there wasn’t any kind of politics behind it just people were nasty to me because of the colour of my skin.

“There seems to so much more wrapped up in it now when you’ve got an Indian Sikh guy in the EDL saying kick the Muslims out, and Islamophobia is just another name for racism.

“The far right are saying to ethnic minorities like the Sikhs that it it’s just the Muslims and once you get rid of them it’ll be ok, but who do they come for next if that happened? So I’m writing in that sort of context.

“The Muslim guys handing out homophobic leaflets in Derby were another inspiration as I’ve had the idea bubbling for about 12 months now. The thing that always baffled me growing up is why minorities that have experienced prejudice could then be prejudiced against another minority.”

* An Muslamic Love Story is on at Bradford’s Theatre in the Mill on Thursday 7 June and Friday 8 June, Tickets are available form the box office on 01274 233200.