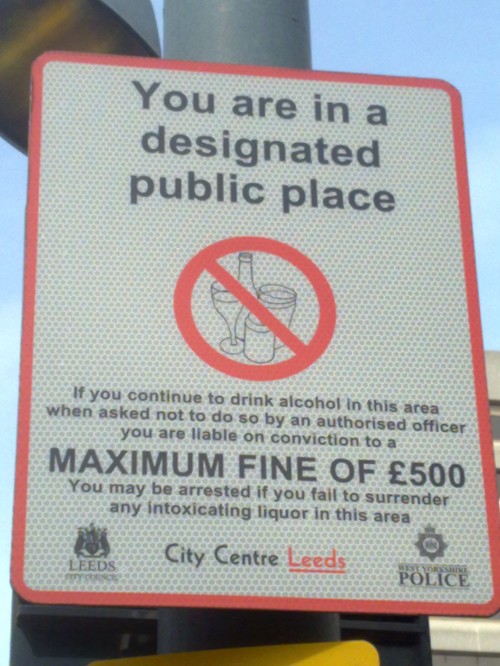 When Emma asked if I fancied going for a walk and reviewing some guy’s tweet I have to say I wasn’t exactly overwhelmed by enthusiasm. I had other plans, I quibbled, and it was way over in Woodhouse for heaven’s sake. Not my part of town at all. But then she said “it looks slightly bonkers . . . and you do like walking.” I didn’t know whether I should have been chuffed or chagrined with her assessment of my character but I sat back for a moment then thought, what the hell, why not. A walk did seem preferable to my other plan which mainly consisted of sitting in front of my laptop getting increasingly annoyed and emotionally contorted for agreeing to do something I really ought never to have said yes to. And the tweet did mention something about booze. Emma knows me well.

I didn’t have time to do too much checking what I was letting myself in for. Beyond a quick glance at the website and a nosey at the tweets just to reassure myself that I wasn’t letting myself in for a laborious evening, collared by a bunch of crackpots, ex-communists and conspiracy theorists (and it wouldn’t be the first time that’s happened to me in Woodhouse) I simply prepared myself with a pair of sensible shoes and a weatherproof jacket. I liked the sound of Beating the Bounds, especially the “fun fact” about beating small boys with sticks (which reminds me, I haven’t renewed my CRB check this year!) and I was fascinated about the Designated Public Places Order that had been placed on Hyde Park. I’d not heard of this particular law. It did seem prettty daft. A law specifically aimed to stop students peeing on the privetts and puking on the private paths of the respectable citizens of LS6. Still, I don’t live in student land, so what do I know?

The Pack Horse was buzzing when I got there. Obviously I didn’t know anyone and wasn’t really sure what to look for . . . what do geographers generally wear? I’m sure they don’t do brown cord jackets and elbow patches any more. Or maybe they do, but in an arch, knowing, self-referential fashion, as is the acceptable post-modern style. I’d soon find out. I got a pint and had a saunter round the pub as I couldn’t remember which room they said to meet in, partly owing to not writing the information down and partly because I’d already had a couple or three pints in Whitelocks after work. I thought I’d join in with the spirit of the event, you know, participant observation and all that. I’d be a pissed participant. Seemed like a grand plan.

Fortunately the psychogeographers were not hard to spot. How many other groups of people do you normally see handing around maps in a saloon bar and muttering conspiritorially about Guy Debord? And I recognised Tim, the organiser, from his Twitter avatar . . . so, it was pink paisley shirts. Who’d have guessed! I sat in the corner for a bit listening to the good natured banter, watching as a small group of non-geographers on a side table got increasingly fidgety as more and more map mavens invaded the small room. They decided to leave just as Tina, who introduced herself as another of the organisers, came over to introduce herself, apologising to the other group for forcing them out of the room, and worrying about appearing inconsiderate. We chuckled about psychogeography being so popular all of a sudden.

When we finally set off down the Woodhouse Road there must have been more than thirty of us. Tim explained the route; we were walking counter-clockwise (widdershins, as he elegantly put it) with the DPPO designated area always to our left, in a long loop taking in most of Hyde Park and Woodhouse Moor. Tim would point out the many signs along the way warning that we may be required to surrender our alcohol to a police officer or even one of those wannabe coppers who swagger about the city if we were considered a public nuisance or drunk and disorderly. I took a long look at our little party. A police officer would have been hard pressed to consider us a threat to peace and social stability. True, we were every one of us swigging from various bottles of booze, Bacardi, Port, Czech lager, a nice Pinot, even brown ale. I myself was quaffing merrily on a 37.5 litre bottle of absinthe I’d managed to purchase from the Sainsbury Metro beside the Merrion Centre . . . well, no, that’s a bit of a fib, but I really wish I’d thought of it before the walk and not in the pub after. Instead, I had a rather fabulous bottle of Viognier secreted about my person which I managed to demolish quietly while conversing upon a range of topics of great depth and significance. Or at least I’d like to think that’s what I was doing. Probably I was just waffling incontinently and slurring my words. By half way around the walk I was feeling rather giddy, and I don’t think I was the only one to wobble. But we were a civilised and convivial bunch; academics and artists, students and geeks, twitterers and habitues of the virtual world, walking, talking, and supping in the street. Any threat to social order as presently constituted was purely ideological. Our party was organised by geographers, for pities sake! I don’t recall one revolution, riot, or rebellion initiated and organised by folks brandishing maps. And I can guarantee that at the end of the evening the bottles were disposed of appropriately in the correct colour coded bank. Not one of us had thought ahead to bring an oily rag and matches. Woodhouse could sleep safe.

I wish I could report more on who was there and what was said and where we walked, it was all really fascinating. I chatted with some lovely people and have followed a few more on Twitter (Hello @concretepost, @squiggle, @101ofawolf, and @tim_waters!) but the walk is a bit of a blur I must say. The only things I remember distinctly are regularly hearing abuse from bands of feral youth marauding about the place (I think those kids just had some boundary issues!) and then, back in the pub, listening to Ian read from Guy Debord’s “Panegyric” in his slow, deliberate, whimsical Scottish accent. Perfect for Panegyric. You can get the book in a rather handsome Verso Press edition, but it’s all available online. Ian read from Chapter 3, a bravura piece of comedy and a great antidote to the idea that French philosophy is necessarily dry, dull, and solemn to the point of sanctimony. Debord has some great jokes, and I’ll end with one of my favourite passages, which kind of sums up the spirit on the evening;

Among the small number of things that I have liked and known how to do well, what I have assuredly known how to do best is drink. Even though I have read a lot, I have drunk even more. I have written much less than most people who write; but I have drunk much more than most people who drink. I can count myself among those of whom Baltasar Gracián, thinking about an elite distinguishable only among the Germans — but here very unfair, to the detriment of the French, as I think I have shown — could say: “There are those who have got drunk only once, but it has lasted them a lifetime.

Wonderful! I hope the Leeds Psychogeography Society organise more of these “derives”, I’ll certainly go along again and I’d heartily recommend the experience to anyone who enjoys walking and likes stuff that’s “a bit bonkers.”