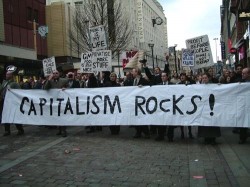 Following the post “Move along Billy Bragg…” by Jenny Harris which is here I have put together a short mix of protest songs. The obvious choice is Bob Marley’s “Get Up, Stand Up” which is included here. I must concede that none of these songs are recent.

What songs would you include in your protest mix? Tell us in the comments.

You can stream the mix here

Stand Up & Party by Theculturevulture on Mixcloud