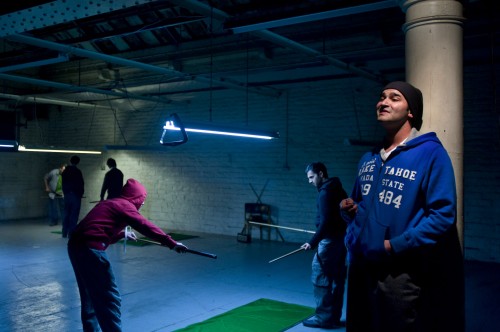 ‘For me The Mill has been more than an exploration what these buildings and this industry means for a community; it’s been about understanding where I come from’
Jonathon Holmes
Co-writer of ‘The Mill – City of Dreams’

It is difficult to grow up in West Yorkshire and not notice the influence of the Mills. When I was young they were still operational: noisy, smelly places which dominated the sky line. As I grew up they all began closing one by one. Now they seem to exist only as conversions: be they spas, designer shopping malls, luxury housing developments or museums. As a child of the 80’s I never really appreciated what they were or what they meant to my community; never completely grasped my parents tight lipped sadness as another was shut and earmarked for development ‘well surely it’s better they be used for something?’ I replied. I was too young to understand it.

The Mill: City of Dreams (produced by Freedom Studios) begins to tell these stories: the stories of our Mills and the people who worked in them, both those who were born in the UK and those who crossed oceans to come here. The promenade production is set in Drummonds Mill, Bradford which opened in the 1880’s and closed in 2002. It features a cast of professional performers and Bradford residents and is co-written by Jonathan Holmes and Madani Younis. As much as it is particularly about Bradford (it has a meticulously researched sense of place based on scores of community interviews): it tells a story repeated up and down the post-industrial landscape of the UK. 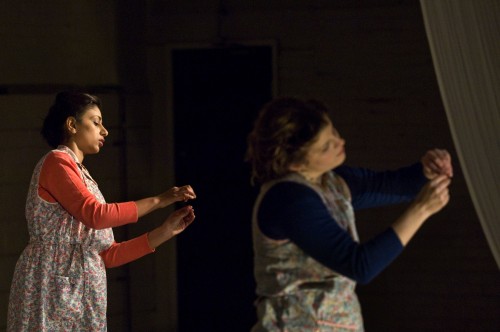 The Mill City of Dreams tells the story of how the mill operated: and what happened when it ceased to. This far reaching project takes in industry’s relevance to communities and lives: through the depiction of personal reflections and experience. It also looks to the larger picture by considering our histories and contemplating our future: one in which our industry mostly exists as shells of empty buildings, physical reminders of what once was. The question of what next for the city hangs over the production and we are offered no simple solutions. 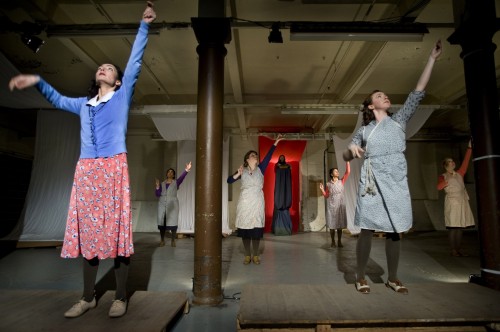 We are introduced to the space in the guise of a tour of a new residential development which bears more than a small nod to the nearby Lister Mills, which Urban Splash recently converted into luxury flats. The audience are led through the Mill’s history and space by amicable guide and Mill caretaker Frank who is sensitively presented by Geoff Leesley. We meet the immigrants who came to work in the city from their homes in Italy, Pakistan and the Ukraine. As the dialogue plays out we are shown their hopes, fears and experiences as new comers (comers in) in a strange place. In light of Cameron’s controversial speech on immigration it felt a particularly relevant time to see this piece, there is an importance in hearing these voices, now and so articulately rendered. Freedom Studios was borne from the Asian Theatre School has a mission to tell the stories of first and second-generation immigrant artists. Productions such as this have a great part to play in countering the racist rhetoric of dehumanisation; which relies on immigrants not being seen as people; with hopes and dreams, challenges and families of their own.

Highlights of the production include the stunning use of light (Lumen) and inventive soundscapes (Janek Schaefer) within the cavernous space of the mill. Threads of wool strung across the space in repeated perpendicular patterns remind us of the absent looms: and provide an affecting moment when this wool is symbolically and literally cut as part of the performance’s moving conclusion. Other highlights include a sadly recognisable scene in a smoky snooker hall which dramatises second generation immigrants stories of alienation and sense of being a disappointment; it was perfectly pitched, delivered and choreographed. Giving the audience chance to rifle through the Mill’s archives was inspired. Somehow just feeling the fabric once produced here: or seeing the handwriting of the mill workers reinforced that as much as it was a fictional account: this is also history: our history.

I didn’t want to do it: to use that cliché; that the building itself was the real star: but there is an inescapable element of truth in it; the space is epic and imposing backdrop. The performance sold out, received a flurry of national press coverage: a wonderful thing for this city. It will be interesting to see what will happen next to a performance which is so intrinsically tied to its setting.

Faults well, yes it did have them: I found some of the dialogue when we were first introduced to the immigrant mill workers clunky and simplistic as I did parts of the introduction from estate agent Anton. However this didn’t take from the power of this hugely moving and timely piece.