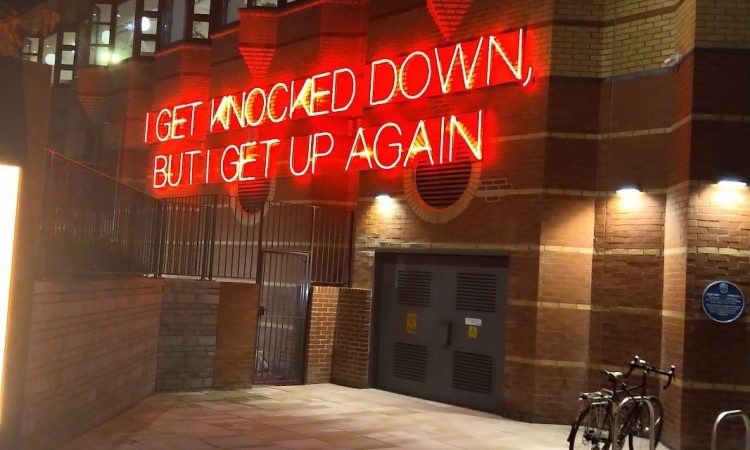 When LEEDS PLAYHOUSE commissioned a neon sign for LIGHT NIGHT almost exactly a year ago it was a nod to the city’s music culture .. “I GET KNOCKED DOWN, BUT I GET UP AGAIN” being a line from Chumbawumba’s greatest -er- hit. As RICHARD HORSMAN reports, they can’t have imagined how prophetic it would turn out to be in the Covid times …

I’ve missed going to the theatre. A lot.

First world problems and all that, but try as I might to feast on Christopher Eccleston’s Macbeth streamed from the RSC, or James Corden being the One Man with Two Guvnors from the National Theatre on video .. it’s not the same.

It’s basically telly, and I can’t abide the smiley happy people telling me with brittle jollity that Carnival, or Springsteen – or even my local pub quiz – is “just as much fun online” because it isn’t. You know that. I know that. Come off it. End of.

So when Leeds Playhouse offered the opportunity to review an actual show with living, breathing, three dimensional human beings actually pretending, in real time, right there in front of me it was an offer I snatched eagerly with both hands.

The new normal theatregoing experience is a bit different.

Tickets are electronic for a start, no stubs to be torn by ushers, and cancellations are refunded if you start to feel off colour. The fabulous new entrance stands dark and forlorn as patrons are guided up the steps to the left of the building and in through a door to the side (is it a fire door? I don’t know the new layout of the building well enough to be certain) then to be zapped by a cyberperson in PPE carrying a thermo-gun. Temperatures checked, hands sanitised .. now please go and stand on the next available orange dot.

So far, so Covid secure. No bars open, sadly, so no glass of red wine before the performance. I feel a bit under-dressed in a plain white mask when a fair few of my fellow patrons are sporting snazzier designer jobs, but also a bit smug when an usher politely reminds one such dedicated follower of facial fashion that the mask must cover the nose at all times. They’re doing this properly. They even have a toilet marshal to prevent undesirable overcrowding.

Finally we’re escorted outside into Playhouse Square .. or what I still think of as the disabled section of Quarry Hill Car Park .. for the evening’s main event – a performance of Dr Blood’s Old Travelling Show from imitating the dog; the company that wowed Playhouse audiences in the olden days (January) with a live shot-by-shot remake of George A. Romero’s classic zombie movie Night Of The Living Dead – Remix created on an indoor stage.

Dr Blood, however, takes place outside.

The plot .. needn’t concern us unduly.

It’s October after all, and this company is adept at the spooky stuff and sophisticated multimedia theatre. What we get is a highly talented ensemble who combine live action, masks (no, not that sort) puppets, dolls and video in a seamless melodrama in which bad people come to bad ends, orchestrated by demons, with the help of some seriously badass technical wizardry.

The whole performance is achieved with three actors – Laura Atherton, Keicha Greenidge and Matt Prendergast – taking on a variety of roles, including that of a corrupt mayor whose mask-face passing resemblance to a Very Senior Member of Her Majesty’s Government is no doubt entirely coincidental.

I was up close to the stage and the company clearly relished their role in bringing live performance back to West Yorkshire; they were enjoying the experience of live creative connection as much as the audience.

The show is directed and written by imitating the dog’s Co-artistic Directors Andrew Quick and Pete Brooks, with design by Laura Hopkins, projection and video design by Simon Wainwright, lighting by Andrew Crofts, models by Matthew Tully and original music composed by James Hamilton – all of whom thoroughly deserve a credit.

Dr Blood’s Old Travelling Show premiered on Playhouse Square on 7-8 October and is now touring to:

and Belgrade Square, Belgrade Theatre, Coventry (23-24 October) with other dates to be announced.