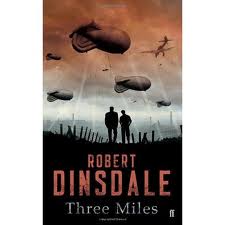 1940s Leeds. German bombers rein destruction up on the city. People stay huddled in air-raid shelters to avoid the onslaught. Well, the sensible ones do. Captain Abraham Matthews, a local watchman, stalks the rubble strewn surroundings of Woodhouse Moor. His prey is petty thief Albie Crowe, the leader of a gang of ruffians who have been terrorising the neighbourhood. But Matthews has a more personal history with Crowe. As the city goes up in flames, Matthews must take Crowe three miles to the Meanwood Road police station whilst avoiding bombs, Albie’s gang and vigilantes intent on meting out their own brand of justice.

Unsurprisingly, given its dramatic set-up, Robert Dinsdale’s novel is an intense yarn that never lets up for a second. At the heart of the story is the volatile relationship between Matthews and Crowe, the former a weary veteran of the war and the latter a boy who is old beyond his tender years. Dinsdale does a good job at slowly revealing the complex history between the two and consistently changing your viewpoint as to their actions. Indeed, the book is very much concerned with ideas of good and evil and how initial impressions can often be false. Dinsdale also manages to create a great atmosphere with a tangible feeling of the smoke filled skies and the dark streets. Of course, those from Leeds will enjoy recognising some of the locations and cameos from the likes of The Packhorse and The Royal Oak add an extra frisson for the locals.

There are a few points when the book threatens to tip into melodrama (indeed, it sometimes seems to be written with a possible film adaptation in mind and,as such, goes for some grand set-pieces) and some of the dialogue seems a bit portentous (especially from Albie who often doesn’t sound like a 19-year-old, even a very clever and mature one). But this is still an enjoyable, tense and sometimes dark adventure that manages to keep a cracking pace and intriguing story line.

Three Miles by Robert Dinsdale is published by Faber & Faber and is available now.

Laurence Boyce is a journalist and regular contributor to The Culture Vulture and an ex-Morley lad. Frustrated by the fact people are holding a great event such as the Morley Literature Festival in his home town when he’s out of the country, he’s reviewing some of the books by some of the authors involved to show that books can truly be an international language