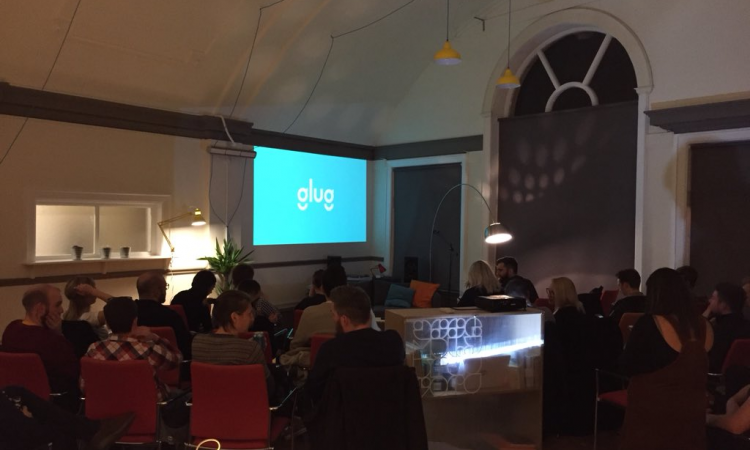 On the 8th of November, an inaugural Glug took place in Bradford’s Assembly and Bread + Roses on North Parade. But what is Glug? I expect there’ll be a few Loiners reading this already in the know, as Glug also happens in Leeds, pretty successfully, and will likely already be aware of its propensity to sprout inspiration and drive passion.

The basic premise of Glug, which is actually an international enterprise, is Notworking™ – in other words getting a bunch of creative entrepreneurs in a room together and putting a beer in each of their hands, thus removing the inhibitions that can often stifle cohesion at your generic, must-scented professional get-together.

The instigator of bringing this event to Bradford, David Craig (who runs the show at Assembly) cleverly saw opportunity in introducing an organised networking stratagem to a place that is a bubbling hot-bed of start-ups, small businesses and creative individuals wanting to make a difference. He made a safe bet as on the night, officially called ‘Chat & Chaat’, for introductory Indian-infused scran at Bread + Roses (a creative headquarters in its own right) followed by the main event of talks by three pretty inspirational dudes.

Dudes being the primary word as I showed up for the food surrounded by predominantly white men, the cynicism had set in that this could turn out to be another self-congratulatory echo chamber created the most fortunate of folks, demographically speaking. However, when the time came for people to settle in their seats for the addresses to commence, I was pleasantly surprised that there were quite a number of women amongst the ranks that more or less evened out the gender divide even if cultural representation was a touch on the disproportionate side.

First to bat was Dan Logan, the director of EYES Brewing, a business that has up until very recently been a cuckoo brewery based in Leeds but are now opening their own premises in the place of the late Bradford Brewery (RIP) on Westgate. It’s hard to be brief here about Dan’s speech because he took us on a journey and I’ve been fortunate enough to have been gifted all 15 pages of his notes so a follow-up feature on EYES is definitely on the cards for these guys. In true former primary school teacher style, he immediately put his audience at ease with humour and charisma, not afraid to be the butt of the joke when the odd minor technical hitch arose, and proclaims himself and associates proper ‘beer nobheads’.

Chronologically, he described how a hobby-turned-passion between friends has brought them to the present day as fully-fledged brewery owners. He had advice for us including: don’t go too big too soon, let other people have their opinions about your product or service, and the importance of boldness as creativity can change a culture. But it wasn’t just his sage words that had everyone erupting in applause and woops when he was done, it was his humility.

In addition to encouraging feedback about the EYES brand, Dan bravely shared the monumental difficulties he experienced with his mental health and struggles he faced from former employers in the face of his recovery – it was incredibly moving in his demonstration that dealing with demons needn’t hold you back in doing what you love, and it was obvious that it wasn’t just me that felt this way.

A tough act to follow, Keith Wildman who is the brains behind North Parade’s very own Record Café made his way to the front. As a well-loved figure to North Parade regulars it took no time at all for the audience to burst out in fits of laughter as Keith, slightly inebriated by Triangle-provided beverages, delivered an impassioned talk on music, owning a business, and best of all, Bradford. There were many tangents had in his presentation but none of them were unappreciated by the crowd who were highly amused by it all, and I particularly loved his excursion in providing brief histories of Bradford industry and the city during his formative years.

Professionally-speaking, the man is a self-confessed workaholic that stresses the importance of a curatorial mindset when running a business that has a number of elements, such as the Record Café which is a premises selling records, top-quality beer and ham. His enthusiasm for being part of the community is undisputable but with a mindset of not trying to please everyone but by doing a few bespoke things brilliantly he’s not just part of it, but a pillar of it, and we as Bradfordians are very pleased to have him.

Arguably the headlining act of the Chaat & Chat was Drew Millward, a world-famous illustrator currently residing in the Aire Valley, but honed his craft in Leeds. As you might expect from a notable figure such as Drew, instead of preparing a script or notes on things to mention, he opened up the floor in a Q&A format, presumably because he figured people would want to know the secrets behind his success. Much of the mystery remained firmly intact however as his unapologetic ‘Someone ask me something’ stance appeared to be a tactic to get him off the stage as quickly as possible rather than explaining how his career has brought him to where he is today.

As least to us as an audience, he couldn’t elucidate on his inspirations and seemed bewildered by his own talent, and the recognition he has received from the creative industries. It was disappointing that at an event designed to inspire people and to learn from the fruitful prospectors featured, he had nothing to bring to the table other than acknowledgement that he was indeed an illustrator that has done commissions for the likes of the Foo Fighters, but wouldn’t want to meet Dave Grohl ‘because he’s probably a dickhead’.

That being said, the very first Glug Bradford was undoubtedly a roaring success and provided me with a much-needed motivational boost as someone who writes a lot for free but could be doing something to change that. Subsequent Chaat & Chats, or whatever names they may be given, can only get even better with better representation on the stage by women and people of various cultural backgrounds, and also increasing efforts to reach entrepreneurs and creatives from these disadvantaged standpoints to attend as part of the crowd as the net…Notworking™ is as valuable, if not more so, than the prepared presentations and so could have a lot yet to offer than we didn’t get to experience this time around.

Commendations to David and Haigh from Assembly for being great hosts in an effortlessly cool venue (the goody-bags didn’t go amiss either), to Sonia and the other folks at Bread + Roses for the ice-breakingly delicious food, and The Triangle for loosening us all up with the tastiest of social-lubricating beer and cider local breweries have to offer, EYES Brewing aside of course.