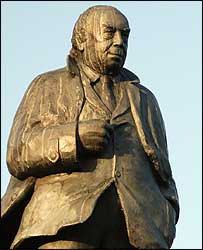 I was searching for references to public transport in literature last night, doing my bit for Mobility Week. There aren’t that many. Buses just aren’t a fit subject for fiction, apparently.

English Journey, however, “a Rambling but Truthful Account of What One Man Saw and Heard and Felt and Thought during a journey through England during the Autumn of the Year 1933,” mentions getting on a bus over twenty times. Priestley wasn’t much of a driver; had he been the book would have been a lot poorer in detail and and much reduced in incident.

Anyone considering writing a transport blog for next week should do themselves a favour and get a copy out of the library. And, come to think of it, have a rummage around the hardback fiction table in The Works in the Merrion Centre where there’s a couple of beautiful Priestly classics for only a couple of quid. Consider that my public service announcement of the day. And my contribution to the literary well-being of Leeds.

In fact, anyone thinking about writing for Culture Vulture at all ought to pin this quote to their laptop:

Because I am what is called “an intellectual” I do not feel that there is a glass wall between me and the people in the nearest factories, shops and pubs. I do not believe that my thoughts and feelings are quite different from theirs. I prefer therefore a wide channel of communication. Deliberately I aim at simplicity and not complexity in my writing. I want to write something that at a pinch I could read aloud in a bar parlour. (And the time came when I was heard and understood in a thousand bar parlours.)

Wouldn’t it be a fine thing to be read even in a handful of beer parlours!

I’m going to give the last word to another of my favourite Northern writers, Keith Waterhouse, celebrating Priestley’s birthday almost forty years ago:

I am not, thank God, a literary critic, and those damned souls who are literary critics have always been wary of Priestley. He has written far more than the restrictive practices of English Literature permit, and what is worse, he has done so in a language that the common man can understand. That is unforgivable.

But if I were a literary critic, and you asked me to state in a few paragraphs why J. B. Priestley’s birthday is worth celebrating with bells and fireworks, I’ll tell you what I’d say.

He is the last of a great line of authors who knew how to teach their readers. That’s why I bracket him with Wells, Chesterton and Bennett.

Writers don’t teach nowadays. They don’t even try to reach the ordinary man. They write about problems of identity for people who can afford to worry about such matters. With the price of books today, they probably know their audience.

Priestley belonged to a dying fast-dying breed of writers who wanted to tell people things. People like myself, who came out of school half-literate, could learn from them. I can still learn from Priestley.

He can make you look at old things in a new way, and what is perhaps more important, he can force you to look at new things in the old way. He can make you ponder a little about what you’re up to.

Pondering a little about what we’re up to … precisely Mr Priestley.