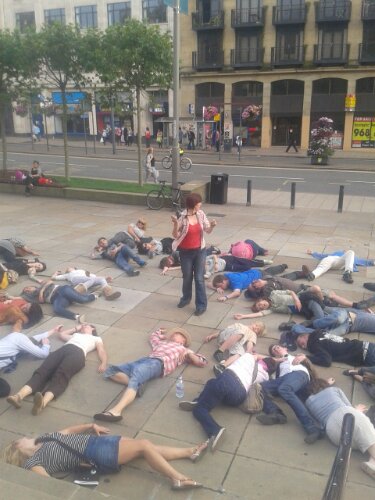 – You mean a flash mob, Harvinder?

– Look, if you’re just gonna be snooty I’m off home. Got better things to do than stand here and be corrected by you.

– Only trying to help. Stay and watch, you might learn something.

– But what are they all doing? Why are they here? Who organised it? … And …

– One thing at a time, Harvi. See that guy there, in the Back to the Future T-shirt? That’s Phil (@philwallart) … he doodles on photos, and I think it was his idea.

– He doodles on photos? What do you mean, doodle? Like, scribble or something? He’s not coming near my holiday snaps. Why’s he do that?

– He does monsters, doing funny stuff, pulling faces, posing in strange places … and yes, I think he does a lot of holiday photos from what I’ve seen. You’d like it.

– And all these people have turned up to be in a photo … with an imaginary monster?

– Quite right, Harvi, glad you’re putting two and two together and managing to come up with single figures at least.

– You can go off people, Philip! … So, you’re saying Phil invited all these people to take part in a flash mob … and then what? What’s the point?

– Hmm, invited isn’t exactly the word. The idea is that you mention what you are up to on Facebook and Twitter, then see who turns up … you never know who’s coming, that’s part of the fun.

– So Phil could have been here on his own … with a bunch of photographers … that’s barking.

– Exactly! … but it worked … loads of people here.

– I recognise a few faces … the urban sprawl lot … and Steve (@MrHackenbush), but Steve is everywhere … but you haven’t really told me the most important thing … Why? What’s the point? Why would you turn up on a beautiful summer evening and stand on the library steps pretending to scream? There’s something more to it, surely?

– Certainly is … it’s for Love Arts Leeds … there’s gonna be an exhibition in Harvey Nicks.

– You’re confusing me, Philip. What’s Love Arts Leeds, and what’s it got to do with shopping?

– Well, it’s a mental health project, using the arts to get people thinking about mental health issues a bit more positively, with a big festival in October, and it don’t have anything to do with shopping … Harvey Nicks just liked the idea and gave them some gallery space … which is nice, I think.

– Ah, so these people are here because of the chance to get themselves on the wall at a posh gallery … now you’re talking sense … where do I join?

– Don’t be so cynical, Harvinder, it’s nothing of the kind. I bet most people are here simply for the fun of it … though I’m sure some of our thespian friends are enjoying it far too extravagantly … and you don’t have to join, you just join in. Go on, Everyone knows you love showing off … get in there.

– On this occasion I shall resist the urge to prance about like a squealing diva, Philip. Thank you so much for the offer.

– I notice you are not exactly in there, pulling faces, and jumping when they say jump.

– Camera shy, you know that.

– Your excuse for everything.

– Not an excuse. And I’m writing about it … need to keep some distance, don’t I? Objectivity, and all that. If I enjoyed myself too much I might forget to take notes.

– It’s all up here, Harv … writing it all down in my head. Trust me, got it word perfect … perfectly worded …

– Oh, I believe you … have you written enough? … do you need a break from all that writing?

– Absolutely … the drinks are on you I believe.