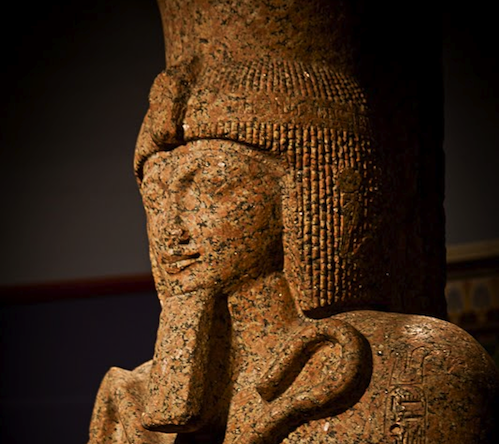 Having heard about the British Museum touring “Pharaoh King of Egypt” exhibition coming to Leeds City Museum I thought I’d go along with my two year old.

We started out the day with lunch where I explained to my daughter that we were going to see the Egyptian Exhibition at the museum. She was able to say “Museum” but “Egyptian Exhibition” was a bit beyond her. Even so she seemed very excited by the prospect of going.

As I pushed my push chair towards the familiar columns outside the museum and saw the sign for “Pharaoh King of Egypt ” I was nearly as excited as R was and was stirred by faint memories of my mother taking me to the Natural History Museum.

I am very glad that the British Museum has moved some of its priceless artefacts temporarily to Leeds. It is a brilliant move by the curators to have it displayed at the museum. Despite this I have to say that as impressive as it is the exhibition is its not very toddler friendly. As one would expect the exhibits are behind glass but they too high up for a toddler to look at. There was an activity trail and detailed descriptions written about the artefacts which seemed better suited to older children.

Although the space is well laid out, with enough room for a toddler to negotiate around exhibits without knocking anything over there is nothing for them to look at their level. As we went around I held R up to peer into display cabinets but it made it difficult to look at things together and she eventually lost interest and declared “Don’t like Egyptian”.

Thankfully the city museum is one of our favourite places to while away countless afternoons so we moved onto the Life on Earth exhibition which R is still fascinated by it. The exhibition feels like it was designed consideration for toddlers as well as older children. All the animals and almost all of the displays are low down enough for a two year old to appreciate and there are lots of interactive things for them to do. R was keen on rummaging among woodchips for pretend fossils and putting on pretend animal skins. There are also lot of exotic stuffed animals which are always fascinating.

The ancient worlds exhibition on the top floor where we went next is also very well designed. Like the Life on Earth Exhibition there are lots of activities for older children. There is also the Leeds Mummy which my toddler was very keen on. Crucially lots of the things on display are at toddler heights and there are lots of things for them to touch.

Two of the activities which especially appealed to my toddler were the bit where you can make you own mosaic and make your own ancient Greek Temple. R couldn’t do either of these but had a wonderful time trying.

As well as the exhibits, “Toddler town” is always a big hit, it means I can have a sit down while my little one can play with the toys and in the wendy house.

Crucially for parents the museum has lots of room for children to run around in and enough things to keep them busy for hours. R was so exhausted by her day out that she fell asleep on the bus on the way home.

Leon used to be a long haired, socialist drop-out living in Hyde Park. Since becoming a father he is now a hard working local government employee and lives in a cottage in the countryside.