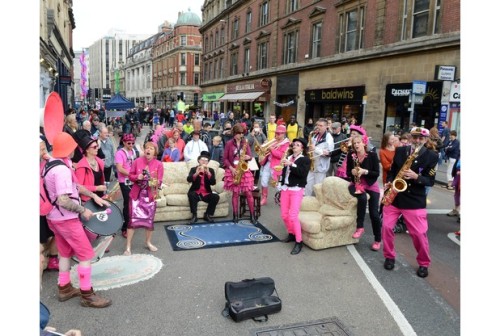 Some time ago, I started a conversation about whether Leeds could have a Ciclovia. With the then distant vision of the Grand Depart in Leeds it gained some momentum as a potential for ordinary Leeds people to get a cycling benefit from the most elite of cycle races. The brakes were firmly applied to that by Leeds City Council this week for three key reasons: the number of road closures for events this year; the number of cycling related projects currently progressing; and the lack of a precedent in the UK.

Whilst these are good reasons garnered from Council Officers it does leave a question hanging … how will ordinary people that want to cycle benefit from the Tour de France?

To recap briefly – I posted about a Leeds Ciclovia just over a year ago.

The idea was that in the run up to the Tour de France that we should have a series of Sundays where there were streets in Leeds closed for cycling, walking, skate-boarding and anything that wasn’t vehicular traffic. After the TdF this would continue as a legacy, with streets returned to people, at a time when there is less traffic demand on them, and when the demand for leisure and exercise space is at its highest. This was timed to ensure that there would be a cultural legacy of everyday cycling. The whole street didn’t have to be claimed and it wouldn’t be as big a deal as a skyride with hundreds of yards of railings keeping the cyclists from the pedestrians. It is a tried and tested idea in Latin America and the USA, and tremendously successful there.

It might seem a bit churlish to feel this is a missed opportunity for the Council given the multi-million pound investment in CityConnect  which includes an upgrade of the canal towpath by July this year, and the Council have not given up on the idea of Ciclovia, it’s just not now in 2014. However there is a need for a coherent link between the Grand Depart and everyday cycling for everyday people. One of the most meaningful statistics that I saw in the last decade was that the people that don’t cycle went down by about 5% and the people that cycle infrequently went up by the corresponding amount (in Leeds that equates to about 3,500 people a year). What change do these first timers need?

It is clear that the TdF is really capturing the minds of current cyclists and the cycling clubs are rejuvenated, cycling to work is steadily increasing from its low baseline, and there is a lot more company for those of us that have been daily cyclists for the last 20 years. However these are minuscule changes compared to the huge suppressed demand for somewhere safe to cycle, which most appear to start with an occasional trip on a weekend or on holiday. These include those aged 8 – 80 outlined in many people’s vision – see “8-80cities” – and this is also the group that are most likely to generate the health benefit from more exercise and active travel. However, too many of the cycle trips that people make in Leeds have to start with a car journey. These includes families searching for a traffic free cycle as well as more sporty cyclists. The potential for cycling would be hugely lifted by the linkage of routes to each of our houses and the demand for Sunday recreational cycling has been spectacularly met in cities with Ciclovia. 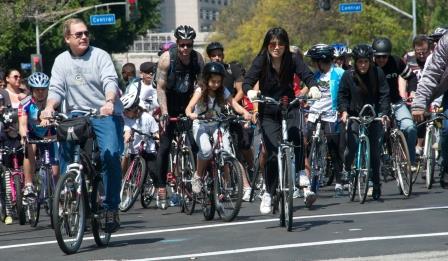 It’s also ironic that the Council decision should come very close to the showing of Jan Gehl’s ‘The Human Scale’ at Hyde Park Picture House on the 25th Feb. If ever there was a message for a city held to ransom by its own vehicle laden streets it will be in this film. The council is worried about the ecomony and the retailers are very quick to see the flow of vehicles as the link to their return to prosperity, but returning to the old ways of making money is really missing the opportunity to create new ones. There is a growing body of research that shows pedestrians and cyclists spend more, in more frequent visits, and car based travel exports a large amount of local spend to multi-national companies with minimal local benefit.

The recent “Make Sunday Special” programme in Bristol in 2013 is due to be repeated and shows us an example of the way forward. Let’s hope we can do it sooner or later.