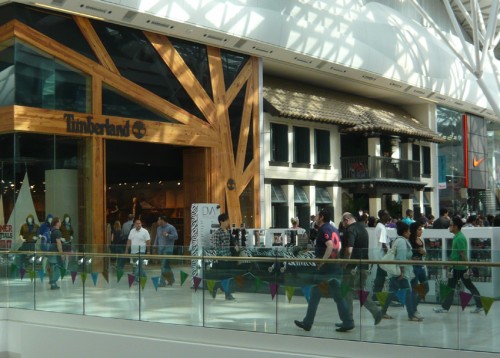 When I first encountered Westfield Shopping Centre I felt like Allan Quatermain from the H. Rider Haggard novel, King Solomon’s Mines; “We crested the hill and before us in the shimmering sunlight appeared all the splendour of the fabled city…” (my words).

My family and I had been on a visit to London. My son wanted to go to a particular store that had hard to get products, and some internet research revealed that Westfield had a branch of this famous brand. As it wasn’t too far out of our way from the Olympic event we were attending we decided to pay a visit.

Now, my shopping experiences in the past have all consisted of the kind that emanate from the old school – I need something so I go to a shop that has different types of these things on display and I choose one based on price, aesthetics, quality etc. If I’m lucky, a shop assistant might actually be on hand to help me.

Nothing prepared me for the different kind of shopping experience that Westfield is innovating. It is no longer enough to simply view the goods and choose one; shopping has to be an experience, an event in itself. In fact, the purchasing of an item is incidental to the experience of being there. 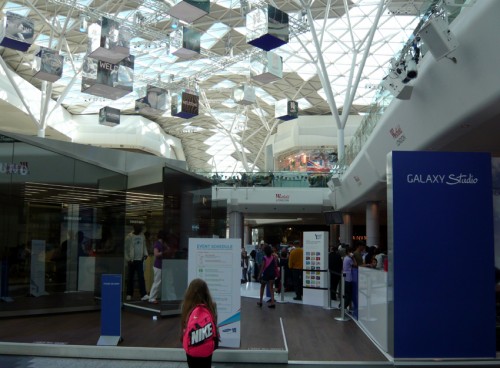 My first impression of the place was noticing the obvious care and attention that had been lavished on its design and build. This was no ordinary shopping centre. The entrance – like some modern Appian Way with stylish restaurants of every kind lining the route to the pleasure-dome – made an unequivocal statement; we were entering an arena of leisure and hedonism.

Once inside the cathedral of shopping, vast areas of floor-space were given up to exhibition areas. Here, companies such as Samsung had cubicles of glass, like exotic hot houses of technology, growing their smart-phones and tablets.

Visitors were made to feel like research scientists evaluating the results.

Virile young men in corporate colours gave demonstrations and testimonials about the products, and attractive nubile girls dispensed free gifts of enamel badges, emblazoned with the Samsung logo, as a reward for merely touching the brushed aluminium products. 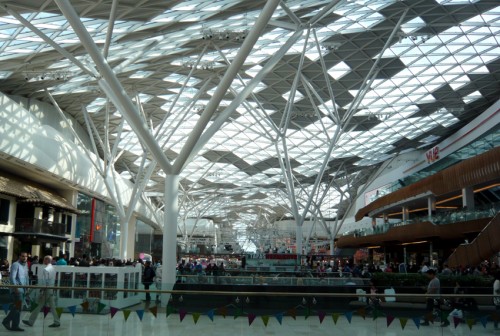 The move towards religious iconography in shopping has begun.

At the moment it is an unconscious emulation of a highly successful strategy employed by religions around the world but it won’t be long before a deliberate plagiarism of beliefs, rituals and traditions is embarked upon by the multinational brands.

As we moved on from the Samsung alter we came across a space where activities were performed for the benefit of the jaded audience. In a Colosseum style layout, the privileged sat around and above the performance space. These activities ranged from a classical violin player to rubbery street gymnasts demonstrating their prodigious skills. Here, one lounged about and took in the entertainment – which was laid on throughout the day – whilst consuming something.

Then there is the shopping experience itself. A shop is now a themed film set. 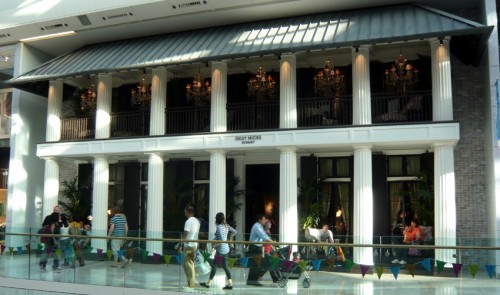 In this photo the American deep south during colonial times is evoked. In the one shop I dared to enter (I was immediately made to feel unwelcome owing to my advancing age and clear lack of any fashion sense.) I sensed that I was in some imaginary youth’s house-party as depicted in a fantastical Hollyoaks episode. The interior was extremely dark with narrow spotlights highlighting the desirable clothes on offer. Pop music was blaring out so loudly that a question such as “have you got this in a 42″ waist?” has to be shouted at one of the other party goers (who, I presumed, were identified as an assistant by their willingness to listen).

I got the impression that if you wanted to try one of the garments on it was likely that you would find the changing cubicle occupied by either fornicating couples or people jacking up.

I have already written about film sets becoming a live event, however, I failed to realise the huge importance of a merchandising aspect to that future model.

Shopping is on the cusp of transforming itself into a theme park or rite of passage or quasi cult. In the future, instead of having music festivals we will have shopping festivals. When seeing a friend with a new outfit we won’t ask “where did you buy that from?” we will ask, “what was the experience when you bought that?”

As we were leaving the centre this one incident encapsulated the future consciousness of shopping. Nearly every retail outlet had someone handing out freebies or inviting you to be massaged or manicured in some way. One such retailer invited me to have my lips kissed by tiny ravenous fish or some-such ridiculous indulgence. When I said “sorry, we’re in a hurry” a puzzled look came over his face.