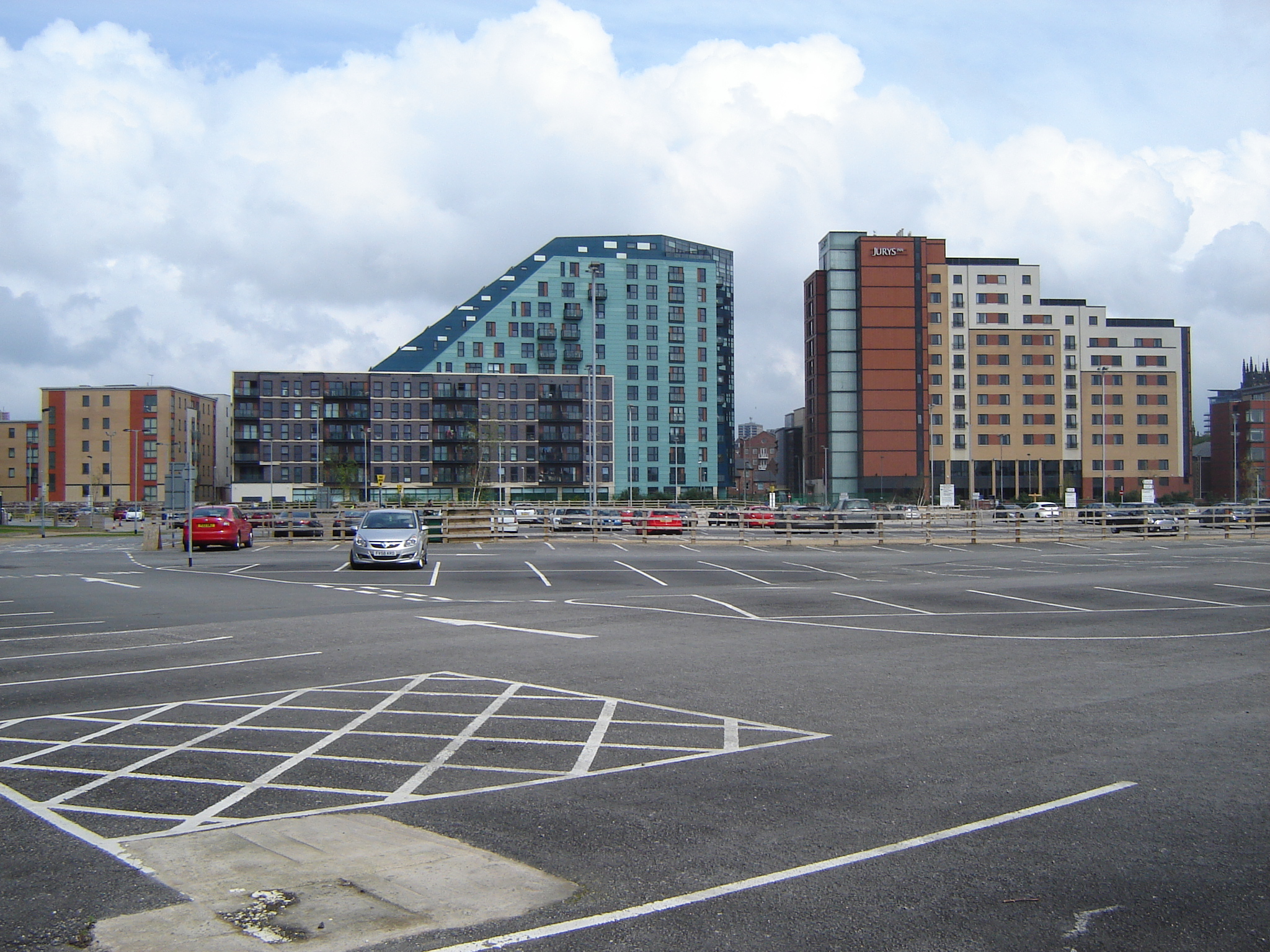 The immediate inspiration for this article came when, at an art-related visit to The Tetley in Leeds, I found myself staring over acres and acres of desolate waste. On the far side was a Chicagoesque horizon that, in the mid-morning sunlight, soared quite heroically – though you should give these things twenty years and see if they’ve turned into slums in the meantime.

When I asked the helpful receptionist at The Tetley for the whereabouts of the nearest cash point, he gestured towards the Chicago on the distant skyline across a tarred and fenced vastness, which it obviously pained his poetic soul to have to describe as a car park rather than, say, an agora.

There are few things more desolating in the built – or crumbling – environment than acreage-guzzling open-air car parks; the ghastly dispiriting forecourts of supermarkets and multiplexes, of retail precincts and all the other hyperinflated theatres of contemporary commerce. Or – as in Leeds, along the south bank of the River Aire – the vast burial grounds of demolished businesses for which no reviving breath inspires new life.

Through a law of inertia as inevitable as Newton’s, these hectares of ghost-laden ex-industrial vacuity become car parks. In many ways these spaces are just as dispiriting when full as they are empty. I struggle to locate the beauty in the design of cars but feel that, as with athletes, their special talent lies in motion; there is something in the fleetness, in the exercise of purpose that transforms into grace. But at rest they’re just empty tin cans, giant pieces of junk littering the streets. Like sewage, cars are necessary and inevitable but, once evacuated, are best kept out of sight.

Most towns and cities provide multi-storey garages for this. Herein lie opportunities for architects to design structures that could enhance and glorify the cityscape. There is no reason, beyond paucity of imagination, why multi-storey car parks should not be designed to lift the heart and spirit of passers-by just as much as cathedrals or museums. Most aren’t of course. They are rude concrete stacks, blunt and ungracious slang in the midst of a city’s polite discourse. 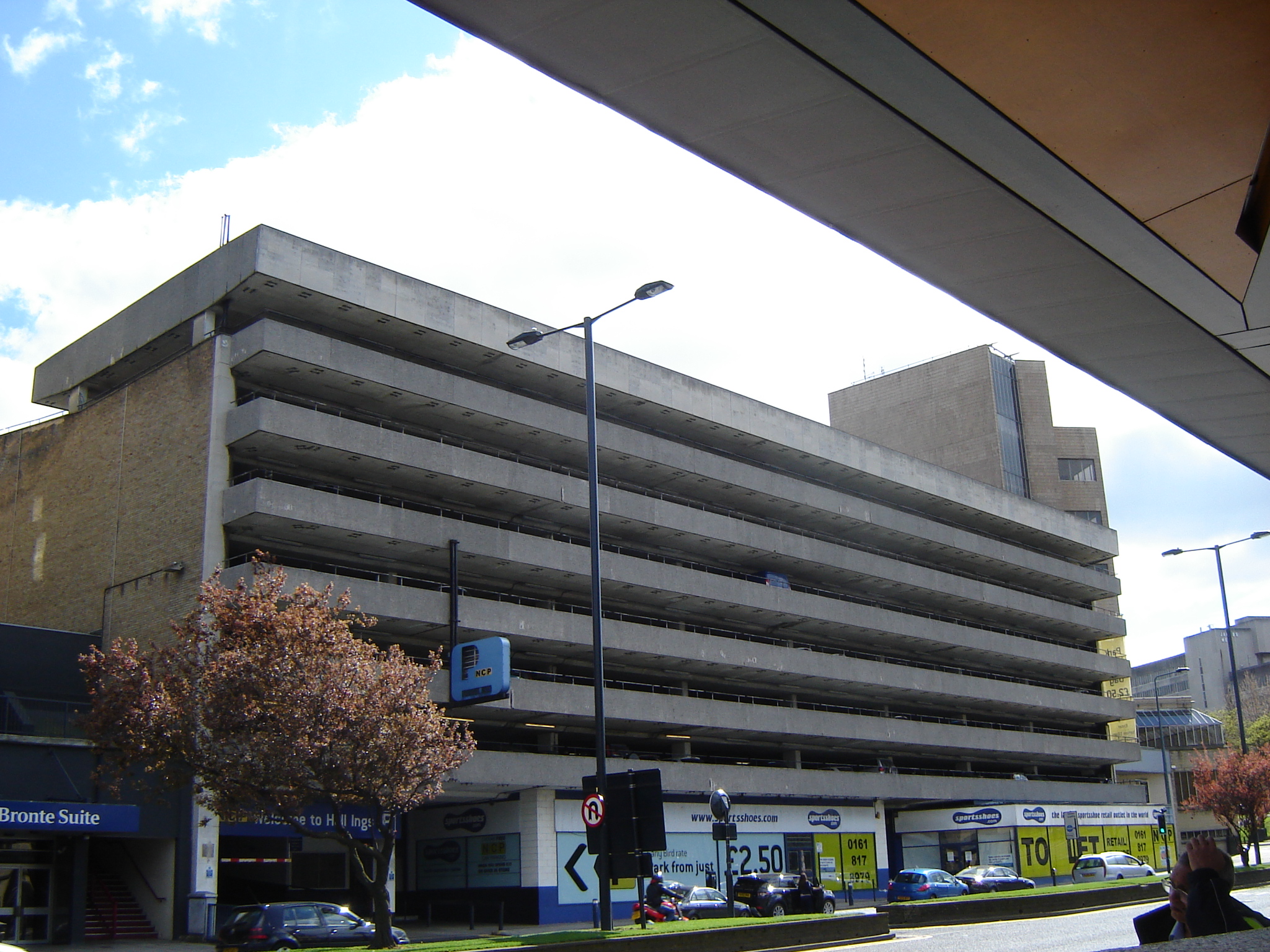 Take for example the Hall Ings car park in Bradford. It is as though the designer has been caught short and taken a concrete dump in the middle of the city. The only possible conclusion is that it was intended as a calculated visual insult to Lockwood and Mawson’s glorious City Hall across the road. There used to be an unsightly connecting bridge from the other side of Hall Ings which thankfully was demolished a few years ago. One hopes this was an aesthetic decision but I rather suspect the Council feared compensation claims from relatives of pedestrians who, overwrought by the sheer hideousness of it all, might throw themselves off.

But it doesn’t have to be like this. For proof one need look no further than one of the finest buildings erected in Leeds in the 20th century, the magnificent Woodhouse Lane Car Park. Its recent refurbishment has only added to its stature. Concrete had had a bad press but this is not the fault of the material. It is not concrete that is responsible for the dumber outcrops of brutalism, it is the architects and planners. That this is the case is shown in the creative and subtle design on Woodhouse Lane. Horizontal lines are interrupted imaginatively so that the viewer is not bullied by an insistently unbroken profile. This is a sympathetic rather than a brutal giant. In a sense its size is essential to the realisation of its vision and is not just a piece of senseless municipal pomposity and tastelessness. 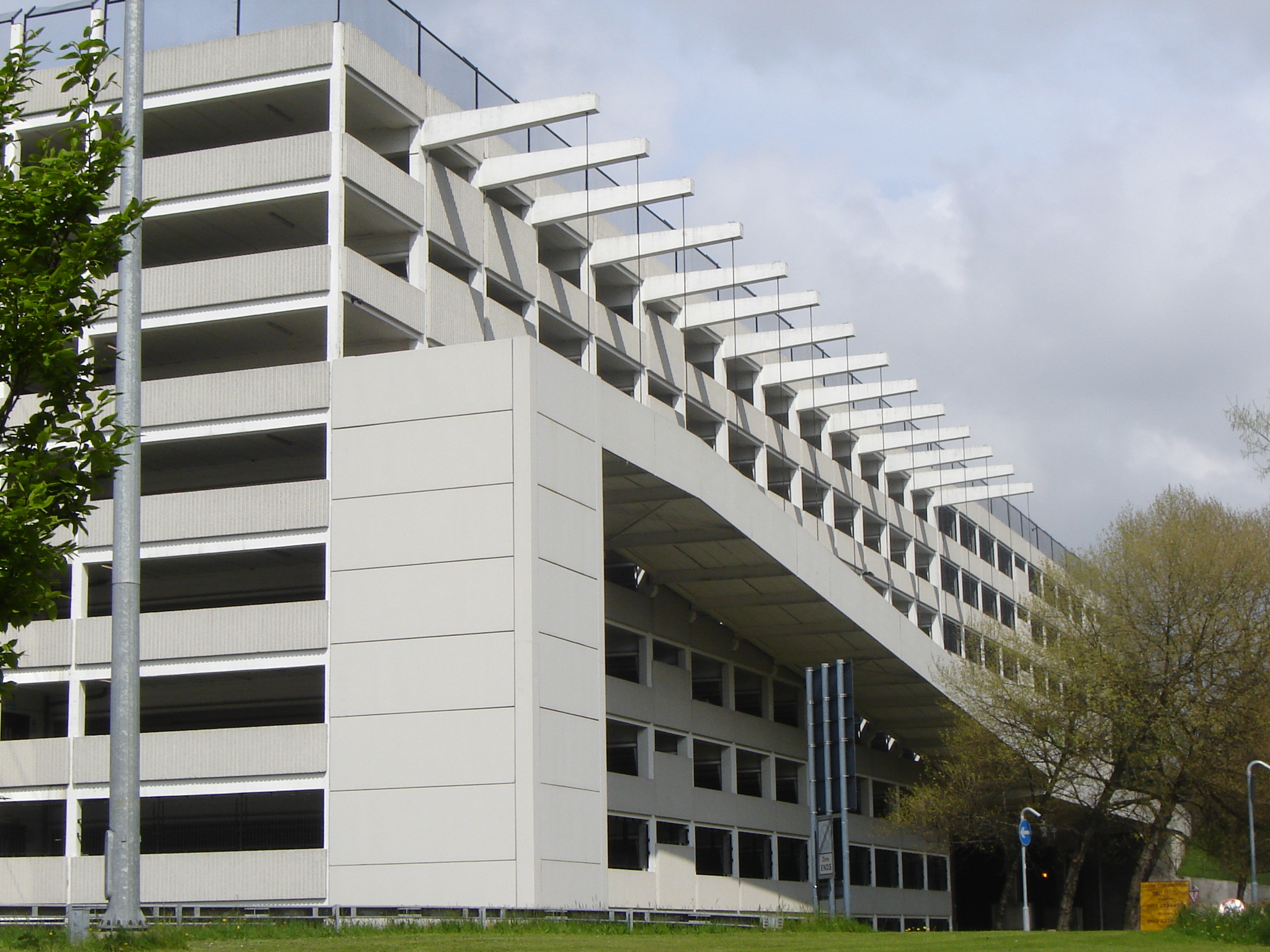 Also, a test for any building, it looks just as fabulous from the sides and the rear. At the back is an exquisitely cantilevered exit gangway which proves that strength is not incompatible with delicate beauty. The building looks almost as though it is floating, such is its effect of lightness; an impression particularly strong at night when generous lighting lends it the impression of an ocean liner. And the much maligned concrete looks and feels wonderful, the generous aggregate – both light and dark for variety – is immensely tactile and, dare one say, almost kissable. 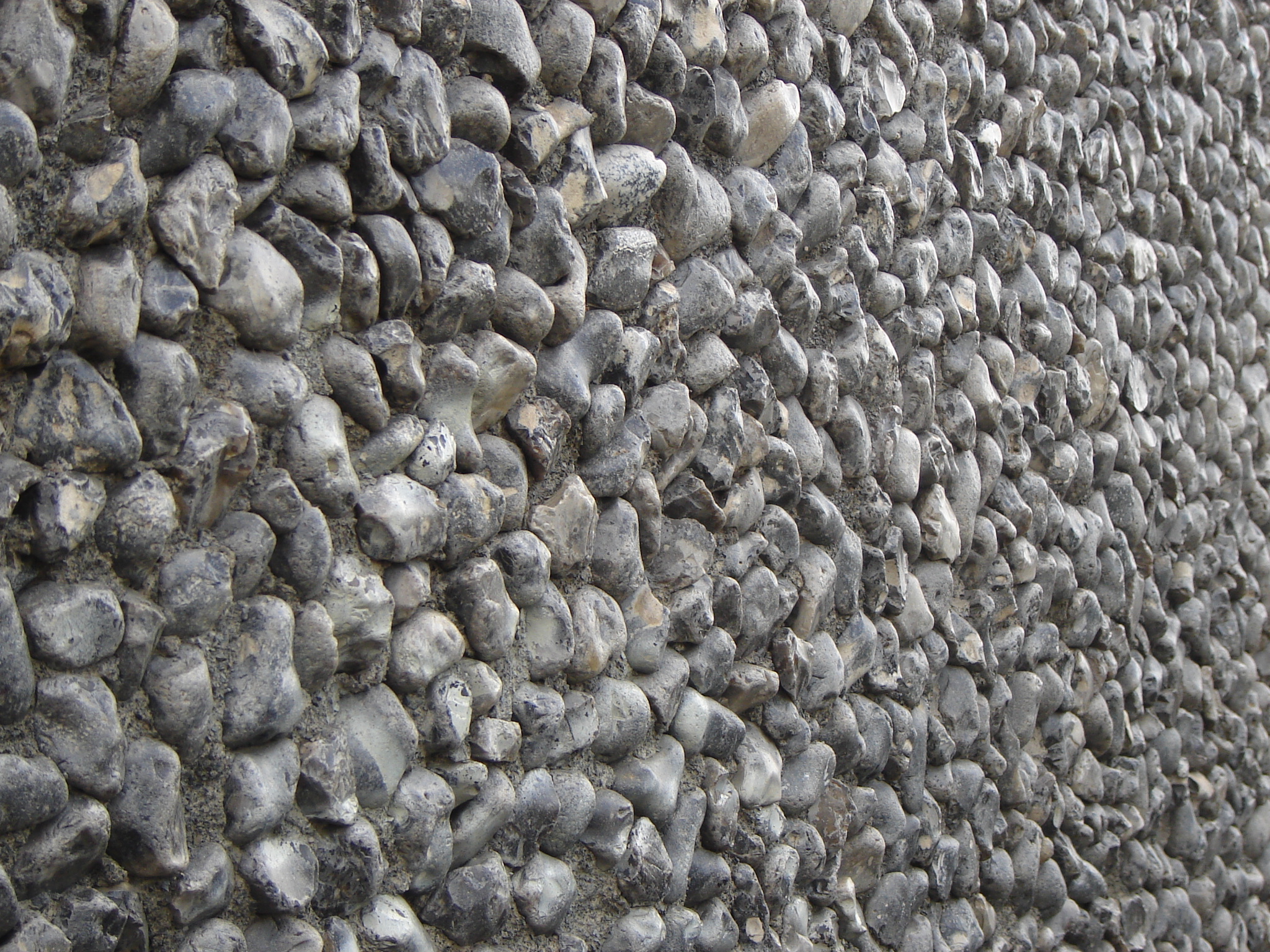 The second example of a lovely multi-storey car park – the concept seems almost an oxymoron – eschews the cliché of concrete altogether. This is the garage built as part of the Victoria Mill development on the riverside in Shipley. 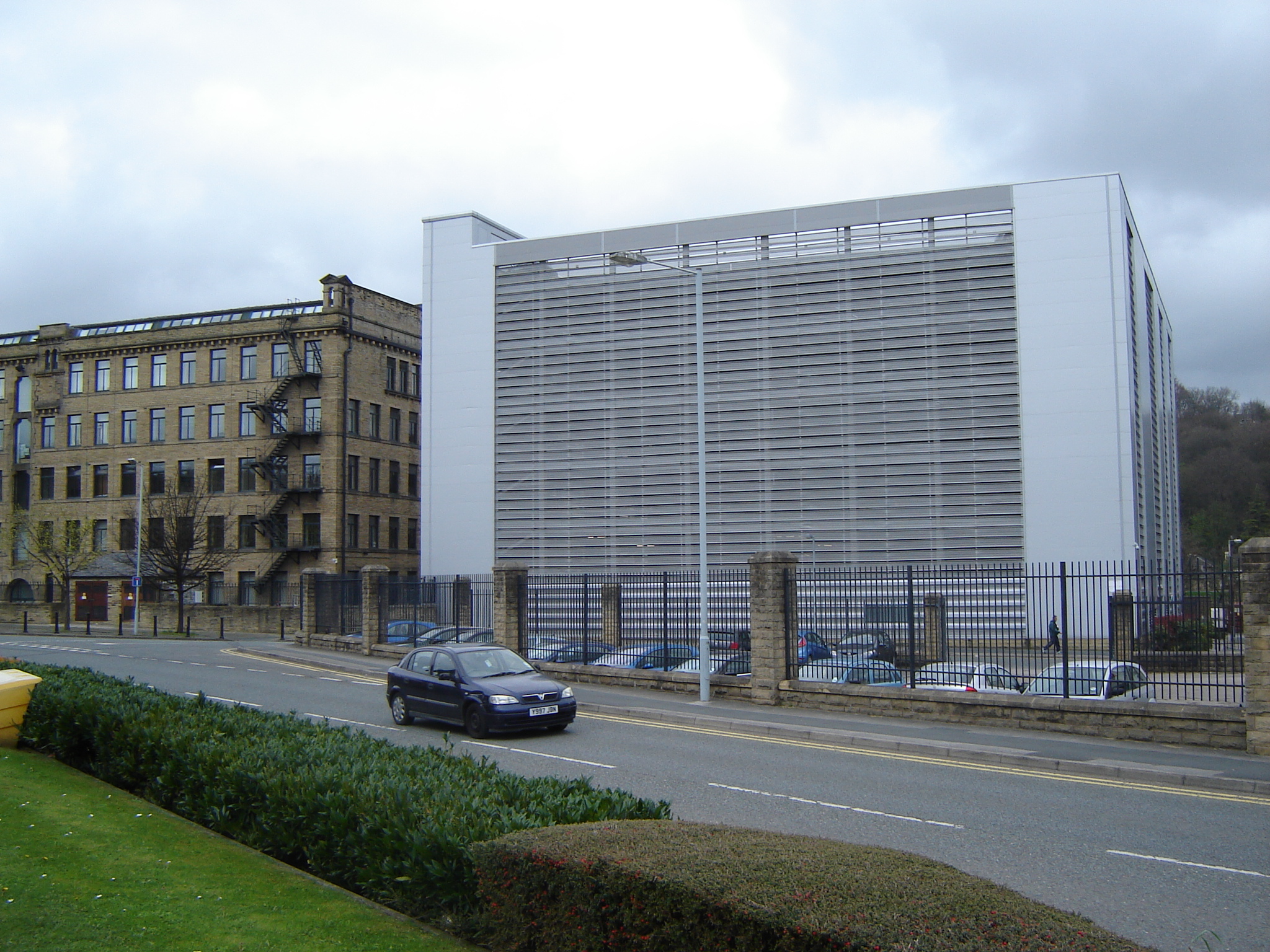 It is a structure of intriguing and attractive paradoxes. The aluminium walls give an impression of lightness and yet are as strong as millstone grit. The use of the space seems at once both economical and generous, which is another way of suggesting that the proportions are perfect. The Victoria Mill residential development as a whole is a very successful blend of the 19th century mill with sympathetically-designed 21st century blocks of flats. The counterpoint of styles harmonises well and the multi-storey garage fits into the context perfectly. It is not an impertinent and unwelcome intruder but a welcome part of the community.

The Woodhouse Lane and Victoria Mill car parks demonstrate that, with care, the simple stack for cars can be an adornment to a town rather than an eyesore, an opportunity for creativity, wit and grace rather than a cheap, dingy and unimaginative public convenience.

Walter inserted a huge PS about the new Victoria Quarter which I thought deserved a post in itself, so I decided to leave it out and ask if he’d expand on his opinion separately. It’s an interesting one. Ed.