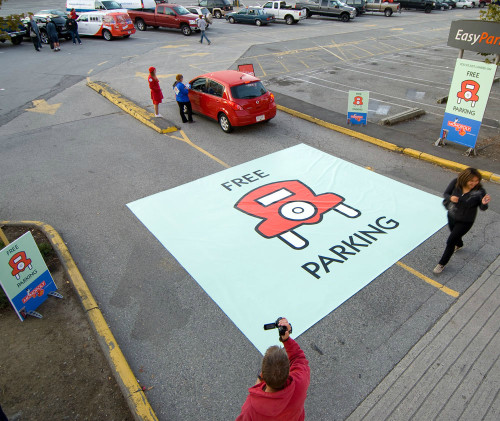 I’ve just signed the petition by Leeds Independents to stop the council imposing new parking charges in Leeds city centre. However, I think the petition presents some badly flawed arguments and I am in favour of charging for parking – there’s no such thing as “free parking”.

The main argument is that the charges are “a stealth tax that will deter people from visiting the city centre” and that the “city’s independent shops, restaurants and bars – the very things that make our city unique – will be impacted the hardest.”

I’m not really competent to comment on the economics of the parking debate but I recognise a loaded phrase when I see one, and “stealth tax” is a bit rich. I’m not a driver and don’t own a car, so I could equally claim that everything is a “stealth tax” on people like me who subsidize vehicle users whether we choose to or not (remember, there’s no such thing as road tax!) At least a parking charge is up front and honest. As far as I know any revenue that accrues to the council legally has to be spent on transport related projects (roads don’t build, maintain and repair themselves) but I shall check that. But this argument is much less important than the following two.

Parking charges will deter “people” from visiting the city centre the petition claims. “People”? Last time I looked owning a vehicle wasn’t a sufficient and necessary condition for claiming status as a viable human being. “People” will not be deterred from the city centre, a proportion of car users will. Wouldn’t it be better to find out which car users will be deterred by the charges – they may not be the people who make any difference to the independent economy – rather than assume every driver deterred is a potential punter lost?

And is it true that car drivers are independently inclined? It’s certainly the case that the more cars you cram into a city centre the fewer cyclists and walkers feel like they are welcome. And there’s tons of research suggesting that younger people and the more affluent metropolitan knowledge worker are turning against vehicle ownership and looking to live in places that have a better quality of life. Maybe – and it’s just a maybe – that if we lost a few car drivers from the city centre we’d gain in other ways? Look at all those cities I mentioned in my last post (best places to live with the most thriving economies) and you’ll find that most have consciously cut down on parking space, and through much more imaginative means than tinkering with a small bit of the tariff. (Copenhagen’s boss of traffic cut down the portion of public asphalt that cars were allowed by three per cent a year since 1960. He had no political mandate, he simply didn’t tell anyone what he was doing. Not democratic – and heaven forbid we were so bold in Leeds – but ask the indies along Stroget street if it was a good thing … there were hardly any in traffic dominated 1960, but it’s an indie paradise now in the longest pedestrianised street in the world in one of the least parking friendly city centres.)

Where I do agree with the petition is on the lack of adequate public transport and the dominance of the city centre by the needs of giants like Trinity and The Arena. But I’d argue that the more we grease up and bend over to satisfy the needs of car drivers the less chance we’ve got to get the public transport the city deserves. And places like Trinity are a suburban infestation – easier car parking simply facilitates turning the city centre into a corporate air-conditioned nightmare.

The oddest part of the petition is this sentence; “To go into the city centre on a Sunday and just wander and enjoy the architecture is an important part of Leeds.” Try wandering around admiring the Cathedral, the Town Hall, Civic Hall, Parish Church, City Square, Corn Exchange … in fact try taking a picture of any of the “things that make our city unique”, or sitting somewhere comfortable just to take it all in … sorry guys, but make way for the traffic flow, us independent wanderers are an afterthought. Cars rule. We’re just minions. More and easier parking isn’t going to help the independent cause.

I’ll end with the last paragraph of the petition: “The council doesn’t own the city, the people of Leeds do”

So, happy to sign the petition – I don’t think the current suggested charges are credible or effective – but I think if we really want to develop a thriving independent Leeds we really do need to rethink what the heck that means. I don’t think it means free parking.