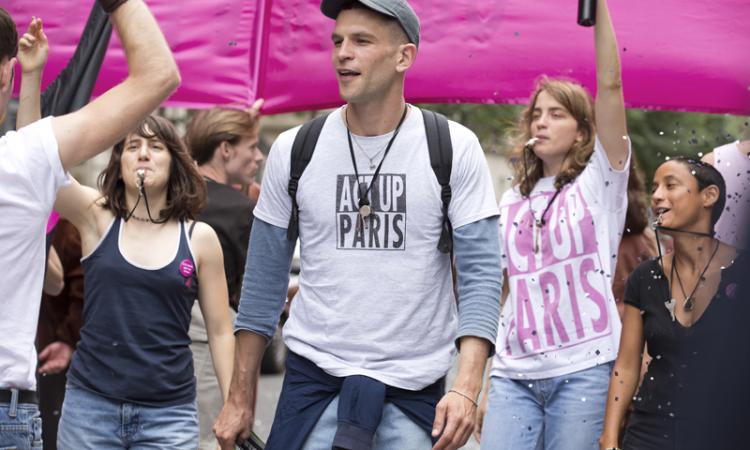 With a storyline that examines one of the darker moments in LGBTQ+ history, the hopelessness of HIV activism, 120 BPM’s exploration of love, pain and desperation in nineties Paris is hard to watch, but should not be missed, says OTIS ROBINSON.

Director Robin Campillo’s film will doubtless go on to inspire a generation of new activists. After a successful opening at the Cannes Film Festival, where it won the Grand Prix, Leeds Film City arranged a timely preview of 120 BPM at the Everyman, together with a Q&A with London-based ACT UP activists, Ray Malone and Andria E-Mordaunt.

Before the screening, the importance of the picture and need for creative protest in the current political climate was reiterated. 120 BPM takes the audience on an intoxicating, harrowing journey through nineties Paris alongside a group of ACT UP activists which includes the seasoned Sean (Nahuel Pérez Biscayart) and newcomer Nathan (Arnaud Valois).

Against a backdrop of the AIDS epidemic, the group embarks on a colourful and creative campaign of civil disobedience to demand healthcare and preventative medicine in the face of government inaction. Though their actions are sharp-witted and gory, they spread a message of anti-violence.

Woven through these protests is the flirtatious budding relationship between Sean and Nathan. Their romance, imbued with gay pride, is touching, but the reality of life in Parisian LGBTQ+ circles as they dodge their way through political resistance and club culture is that tragedy is not far around the corner.

Through Sean and Nathan, the doomed poetic jokes prevalent in LGBTQ+ communities become certainties. Pride and fear of HIV intermix. Club culture pulsates at the beating heart of the two’s identity, a source of pride and, ironically, the feared infection. The anatomical reality of HIV and AIDS is rife. Campillo wants the audience to be aware of how intricately tied to death LGBTQ+ life in Paris was at the time.

The polar extremes existing in gay life are poetically rendered. Characters lack faith in government healthcare systems, but cry out for their help; sensuality and eroticism oppose uncomfortable medical jargon and imagery; and HIV positive activists fight with pride for their cause, but are devastatingly inert with shame towards themselves when trying to maintain personal relationships and sex lives.

Campillo marries these opposites to an anthemic house-music soundtrack that conjures fear and excitement, leaving audiences invested in the political cause as though slap-bang in the middle of events. ACT UP’s slogans echo constantly throughout the picture inspiring responsibility: Action Equals Life; Silence Equals Death.

As tensions rise, the focus of the film removes itself from politics towards intimacy. 120 BPM visits an intense and devastating point in history, personal to many, that remains as relevant today. Expertly crafted and balanced with sorrow, volume and a dash of LGBTQ+ optimism, audiences will leave screenings feeling angry, full of pride and inspired.

As the credits roll, London-based ACT UP activists Malone and E-Mordaunt allow a five-minute intermission for those touched by the picture to finish grieving its end. After exactly five minutes, they jump right into action. The pair, who has watched the film several times as part of their Q&A tour, celebrate the grassroots activism that runs rampant throughout the film, though Malone highlights the importance of creativity in ACT UP’s foundation.

“Not everyone wants to get arrested,” she says, expressing their wish to “attract creatives” with crafty ideas for civil political protest. Contrasting present-day Britain with the political climate of 120 BPM, Malone revisits a 2014 action in which ACT UP dumped manure in front of UKIP offices in protest at ‘bullshit’ attitudes towards HIV positive civilians.

E-Mordaunt expresses ACT UP’s goal to reduce the criminalisation of drug users and provide clean needles which would help quell the risk of HIV. The facts are there, she says, so why aren’t we doing anything about it? Following the emotional trauma captured on screen, the audience roots for them, engaged in the discussion.

The evening was emotional, insightful and jarring. If not sobbing, the audience was left to picket for ACT UP’s values, past and present. Some audience members may feel far-removed from the harrowing moments in history described in the film, but, as Malone and E-Mordaunt insist, there is greater need for action now more than ever.