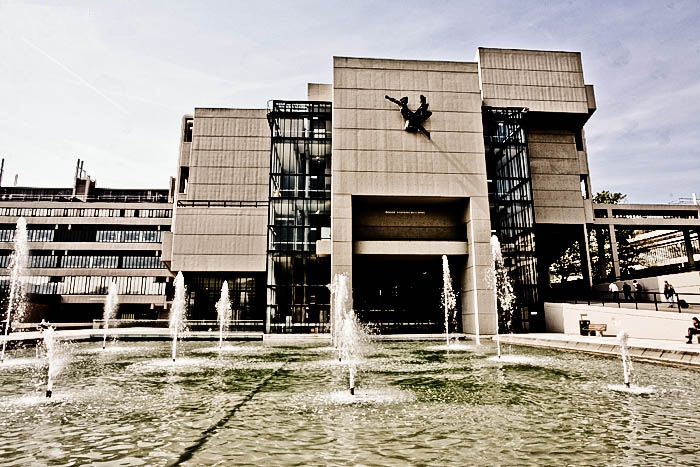 Leeds is home to one of the finest examples of Brutalist architecture in the UK. Seriously. The Roger Stevens Building sits on the southern edge of the University of Leeds campus. It has a fountain and a sculpture and if that’s not enough to impress, it’s a Grade II* listed building. I know, cool for a building that some people think is hideous, right?

The Roger Stevens is actually a quite beautiful building but the expanses of glass and concrete characteristic of Brutalism are generally pretty divisive. Brutalism tends to be a love it or hate it style of architecture and, to be fair to the haters, the Roger Stevens is linked by walkways to other interesting but much less attractive 1970s buildings, meaning that it tends not to be seen for its own merits.

So let’s look at the Roger Stevens as a beautiful building in its own right. It was named after a former British diplomat who served in Buenos Aires, New York and Antwerp, among other places. Did they commemorate him though? Oh no. It was left to Leeds, where he was Vice-Chancellor of the university in the 1960s, to do this.

The building was designed by the architects Chamberlin, Powell and Bon and completed in 1970. They also did the Barbican and the groundbreaking Golden Lane Estate in the City of London, which is widely considered a great model for urban living. We’re in good company here. 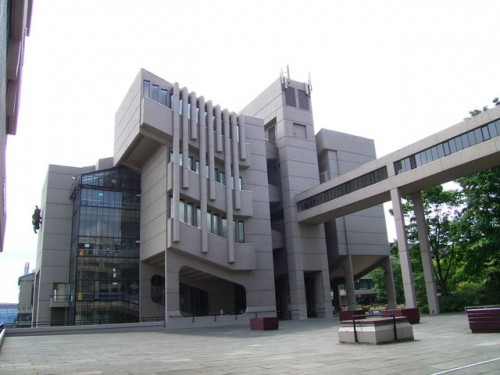 English Heritage says “the building is an outstanding and individual design with bold external shapes and carefully designed interiors.” That doesn’t tell us the half of it though. Brutalism, pioneered by architect and designer Le Corbusier, tended to put the concrete on the outside rather than using it purely for infrastructure, hence the dislike of its style for some people. It’s characterized by angular, repeated shapes and often has a lot of windows and open plan spaces. The design also emphasizes functionality. In short, it’s sparse, unfussy and often, well, quite brutal.

Two features of the building contradict the standard Brutalist aesthetic. One is the large bronze sculpture of a floaty, ethereal woman on the side of the building by Quentin Bell, nephew of Virginia Woolf, and a born member – quite literally – of the Bloomsbury Set. The other is the fountain, which is there for visual rather than functional purposes. In this sense, some of the harder aspects of ‘classic’ Brutalism are tempered. 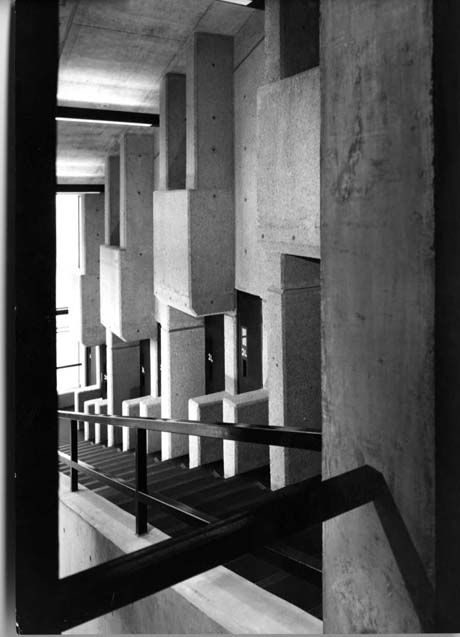 These features aside, the Roger Stevens is 100% bona fide, straight up Brutalist. It’s made of concrete (of course), with hundreds of tall, narrow windows, many of them mirrored. My former office on the ground floor – which, somewhat confusingly, was called Level 5 – had windows running the full width of the room. The café upstairs – first floor, aka Level 6! – is glass-walled, with windows in the corners that run the full height of the building to let the light flood in on its fixed concrete and oak bench tables. The lecture theatres, which lead off long, low stairways have individual doors into the rows of seats, meaning that lectures are not interrupted by latecomers. It does also mean that your students all tend to huddle on one side of the room but I found the crick I got in my neck lecturing there a small price to pay for teaching in my all-time favourite building.