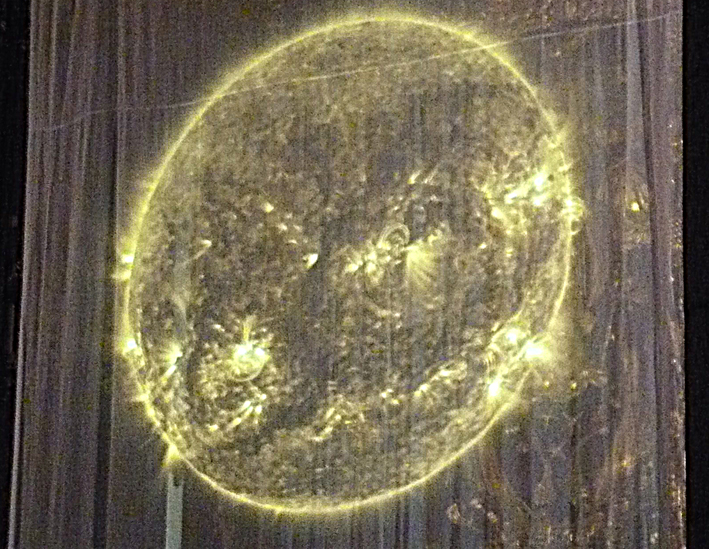 Ivor Tymchak has a numinous experience at Light Night…

It’s like some hoary old tale of redemption; after years of dissolute experiences in soulless art galleries I resign myself to never rediscovering that thing of beauty I once knew as an innocent young child gazing at the wonders of art, when I blindly stumble into a church late at night and by either luck or divine intervention I experience a vision that shakes me to my very core and I emerge from the experience as a newborn child of the universe once more.

But that’s exactly what happened during Light Night.

I initially went round the British Art Show at Leeds Art Gallery with a familiar sense of growing disappointment and irritation before observing some of the nice community activities in the public spaces. Later, I sat on a bench to consider my options: going home was favourite but I had the official Light Night booklet with me so I flicked through that before making my move. One item caught my eye – The Sun at Night by David Henckel, an installed at Leeds Cathedral. Intrigued, I decided to make that my last visit.

What I encountered upon entering nearly made me prostrate myself – it was the perfect fusion of the holy trinity – science, art and religion.

Hanging above the altar was a diaphanous shroud and on it was projected a high definition time lapse film of the sun as shot by NASA’s Solar Dynamic Observatory. A year had been condensed into thirty minutes. Dominating the altar were enormous speakers emitting a soundtrack of chaos. I had to sit down and contemplate this phenomenon.

As the burning sun slowly rotated like an apparition of the Holy Ghost the sounds of creation bounced around the cold, prayer-soaked rock of the church. I was mesmerized. The filtered images showing the roiling surface of the sun represented the apotheosis of human achievement through technology. Juxtaposed with the ancient worship of the ineffable and heightened by the booming voice of god this created a sublime moment in the profound, the sacred, and the immaculate.

Photographers took it in turns to approach the altar and genuflect before the vision as they steadied themselves for their communion with the sun, their cameras reciting the liturgy of modern prayer – ‘click, click, click’.

Eventually, the miracle passed and the sun disappeared along with the sounds and there was a brief silence in the cathedral. Then, just like in life, the sun appeared again and the cycle repeated itself as it has done for billions of years.

All of life owes its existence to the sun – the sun IS god.

I’m sure the installation works well enough in an art galley or shopping centre but the choice of a cathedral was truly inspired. This is Art on a monumental scale and it achieves its ultimate purpose – to invoke awe.

My only criticism of an otherwise perfect work of art is that the projected image of the sun should have been ten times bigger. They should also host this installation in every Cathedral in the land on special holy days. I, for one, will be a regular church-going citizen as a result.