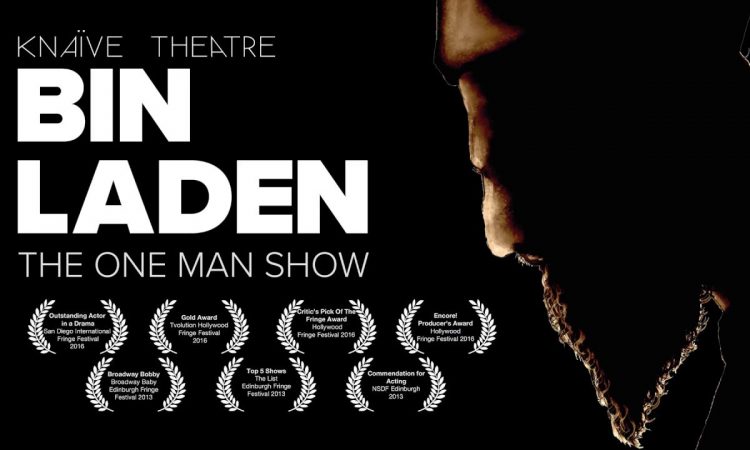 “We are primarily interested in political & immersive theatre and the community around us. We experiment to find new ways of affecting, transporting and transforming ourselves and our audience.” Knaive Theatre Company

I have delayed writing this review, as I don’t really know how to put into words what I saw. The performance has stayed with me for many days since I was an immersed member of the audience, for Knaive Theatre Company’s performance of ‘Bin Laden the One Man Show.’ The performance has me thinking, has me considering my political stance on war, on terrorism, on how far I would go to defend my family and my country. In that respect, for me, this performance was a success, as I believe that’s what theatre is supposed to do. To provide a different perspective, to make the audience think, and to stay with the viewers long after the performance has finished.

Tyrrell Jones and Sam Redway have created an original piece of theatre. They have chosen a taboo topic and allow their audiences to talk about it, to listen to different viewpoints, and to challenge in a safe environment. I certainly left the performance with more questions than answers, but for me that is a job well done.

The performance is in two acts, with the first being the one man show, Sam Redway as Bin Laden is amongst the audience as we take our seats, and what I would call, stereotypically English music is playing as he makes his audience cups of tea and hands out biscuits. This sets up an informal, relaxed atmosphere as Sam takes his seat on stage and poses some questions to his audience along the lines of: Do you like the current political party? What don’t you like about them? That’s most of the audience, so why are they in power? Questions I am sure many of us ask on a daily basis.

We are encouraged to answer and a dialogue is opened. This is a clever way of putting us in the position of considering standing up for what we believe in and how we would go about doing this, which then links to Redway’s transition into Bin Laden. His monologue is always ‘I’, and goes something like ‘I fell in love’ ‘I went to University’, ‘I disagreed with what was happening in my country’, ‘I had to do something about it’.

I think what I have wrestled with the most, is Redway humanising Bin Laden. Telling us about his childhood, how he fell in love, how he witnessed horrific injustices, murders and attacks on his friends and family, all the while asking us what would we do in that situation. Let’s be clear, most of us wouldn’t go to the extremes that he did, but it certainly gives us another perspective, and I think after all this time, I have never thought of Bin Laden as having a family, as being a human, and I struggled with that throughout the performance.

CarriageWorks’ intimate space perfectly complements the subject matter. The lighting and music were just right, not too much, but enough to provide the monologue with more than words.

Redway, did a great job of portraying Bin Laden and engaging his audience for the duration, moving seamlessly from providing facts, to portraying the man behind the terrorism. Keeping up the fast pace, interacting with the audience, including the audience, and feeding them their lines, then crying helplessly on the floor in character. This is a huge responsibility but he carries it off seemingly without a hitch.

The second half of the show is a Q&A with Redway, Jones and the audience. We are invited  to discuss the topic, to talk about how we felt, how they felt. It’s an open forum and I would recommend everyone attend this after the show, to listen and to be educated further. Misconceptions can be ironed out, you can take comfort knowing that your audience neighbour also felt empathy, you can explore any aspect of the piece. Redway and Jones are clearly knowledgeable (as one would hope!) on the subject and communicate this well, diplomatically putting their opinions across as part of the conversation.

The conversation opened is an essential one and shouldn’t be shied away from, however uncomfortable it makes you feel. I would recommend that you try and get to this performance if you can. There’s a journey you go through watching the show that I can’t quite put into words.