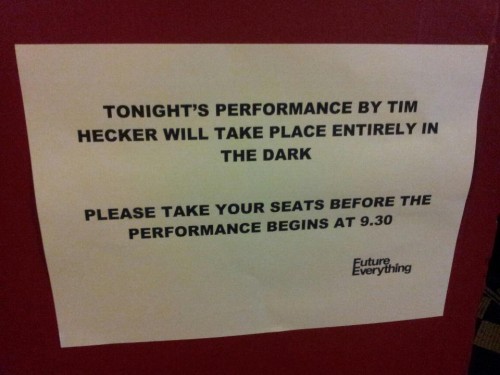 TONIGHT’S PERFORMANCE BY TIM HECKER WILL TAKE PLACE ENTIRELY IN THE DARK, proclaimed the signs. I saw more than one punter pause and take in the information with glee: this was exactly what we were in the market for. The deprivation of one sense allowing the utter indulgence of another – a feast of pretension for the ears.

Because, make no bones about it, Tim Hecker is music for the ears of the truly pretentious – a club which I’m more than happy to claim my membership of. Take his breakthrough album, Ravedeath 1972. There’s the wilfully anachronistic title, for a start. Then the cover image, a group of beardy weirdy types dangling a piano precariously off the edge of a tower block. The song titles: “Hatred Of Music”, “Studio Suicide”, “In The Fog I, II and III”. If I had a beard, I’d be thoughtfully preening it with one leg of my horn-rimmed glasses right now just thinking about it.

Hecker recorded the album’s source material in a church in Reyjkjavik (you really can’t make this stuff up), on a wooden organ (it gets better), manipulating the sounds through fuzzing bass speakers and smothering the whole concoction in layer upon layer of feedback.

But for all this on-paper pretension, it’s about the most powerful, raw and emotive album you’ll ever hear. A challenge: follow the link at the end, lie in a darkened room with the volume turned right up. There’s no denying how oddly moving, how very human it is.

Some of the subtleties are lost live in this Salford church – in no small part due to a distinctly tosserish element of the audience insistent on talking the whole way through (really, who goes to an ambient drone organ gig for a natter?). But when it works, my god does it work. Soundscapes drift into place, atonal swathes of drone wash over each other, building and building. Gradual, simple melodies form out of the melee, grabbing you by the pit of the stomach with the shock of their sudden, plaintive conventionality.

The repeated ascending three note bass cadence that closes Hatred Of Music is the best example of this tonight; the simplest glimpse of familiarity bringing order to chaos. Pure, visceral, pew-shaking noise made strangely poignant with this lightest touch of melody. Think of that guitar solo you love – that one note that gives you goosebumps every time – and that’s the power these carefully cultivated moments by Hecker have.

So, yes: it’s pretentious. Any argument otherwise would be rendered nonsensical by the number of affectedly un-groomed beards in evidence. But it would take a hardened heart (or a persistent natterer – no, I’m not letting this one go, woman behind me to the right) to deny how affecting Hecker’s compositions are.

Special mention also to one man project Forest Swords who made it from the Wirral despite a car crash on the way with a live setup including bass, decks, guitar and video projections. A dubby, glitchy, hip-hop infused set with distorted soul vocal samples called to mind at once the building post-rock repetitions of Godspeed You Black Emperor! and the post-night-out hazy recollections of Burial. Lovely stuff, though it was a shame the volume didn’t quite do it justice.

Now, turn your lights off, get your best headphones cranked up, and listen to Tim Hecker’s Ravedeath, 1972 [Spotify link]