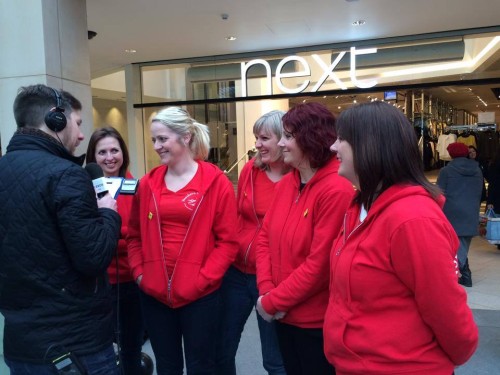 Yorkshire Festival 2014 Launch – Does It Get Any Better?

Rachel Auty sang at the launch with some of her choir, Northern Songbirds. She tells us what it was all like from an insider’s perspective …

My choir, Northern Songbirds, sang a gig with Hope & Social last August as part of the Knaresborough FEVA Festival. It was ace. One of those things you’re never sure if anything will ever match. However, we’d been invited to be part of a ‘flash mob’ with the band this week. Turns out it was the launch of the Yorkshire Festival 2014. Turns out all the regions press were there. Turns out we were on the TV and radio. Turns out that sometimes when you think it’s as good as it’s gonna get, it can get even better.

It had been a tricky few weeks for me. I wear a number of hats here. Let me explain. So, as well as being in Northern Songbirds – a choir that is known to dabble a bit in Hope & Social happenings – I do a bit of press & marketing for the band, and Grassington Festival. And I had been party to the fact that Hope & Social & Grassington Festival would be delivering one of the Yorkshire Festival 2014 projects, long before the embargo was lifted this week. In fact, I’m the press/ marketing person for the Tour of Infinite Possibility project. Probably THE best job I ever had. It’s all sooooo bloody exciting I’m amazed that I managed to keep it under wraps actually.

Anyway, so, we’d been asked to be part of the flash mob. We jumped at the chance. We’d also done Bring The Happy with Hope & Social and a couple of other bits and it’s always been amazing. Only a handful (6) of us could make it; it was a Tuesday evening rehearsal and then a Weds morning event. Well, when you have ‘day jobs’ and school-age kids this is no mean feat.

We were sent the music and the song, The Big Wide – a brand new song written and recorded for Yorkshire Festival 2014 that also sat under the embargo umbrella.

I lost count of the amount of times I would say something to choir and then follow-up with ‘But mums the word on that, yeah?’.

One Sunday morning rehearsal at mine and a few cold hours spent with the band at the Trinity centre and we were as ready as we would ever be. Even at rehearsal the song felt so good! It’s even better at big, badass volume. Choir belted it out as loud as we could, and the brass band sounded tremendous. This was just the rehearsal.

Wednesday morning came and I felt sick. A mix of tiredness, adrenalin, and old fashioned stomach butterflies. Too much going on! I’d been working on all the background stuff for the project with the team – web page, facebook page, copy writing, logo design etc. Today it all got put ‘out there’. Today we could TALK about it! Now that felt liberating.

I could feel the excitement even as I approached Trinity on that rainy morning. There was a tangible buzz around the place. Maybe it was just reverberating off me? So all the regional press had been invited by Welcome To Yorkshire/ Yorkshire Festival 2014, and they were all upstairs mingling over breakfast in Angelica’s.

At 9.30, the performers were all asked to gather at the church next to Trinity for our briefing. We were handed ‘I’m Part of It’ balloons (didn’t like that these were black!), we grabbed bells to ring, and proudly wore our ‘Yorkshire Festival 2014’ pin badges. We were already ‘Part of It’. And it felt so good.

At around 9.50 we were marched from the church into the Trinity centre, and casually we made our way up the escalators to the Everyman cinema. We had to hover around the toilets in an attempt to be out of the public eye. It’s very glamorous this performance lark.

The band took their positions and started to play a ‘time killing’ beat from their song ‘Marching On Through’. The idea being that they could just keep on playing this until we were all in position. So bells ringing and balloons bobbing, we jigged our way back down the escalators and assumed position. The crowds of press then started to spill from Angelica’s, filling up spaces all around us, poised and unsure of what they were about to see.

When it seemed everyone was gathered, the band were given the nod, and there was a momentary silence before ‘The Big Wide’ was belted out, full pelt, by a band who definitely know how to be loud.

The feeling of being huddled in amongst a giddy, jigging choir crowd, all singing harmonies to such a tremendous Yorkshire anthem at an event like that… It’s hard to describe. Rousing. Life-affirming. Fantastic.

And when the song ended and the yellow confetti floated down around us, I felt genuinely sad. I wanted to do it again. It was over too fast.

The good news is that we then gathered in the church again, and we listened to all the great projects that will be going on across Yorkshire as part of the Festival over the coming months. Wednesday’s ending was only just the beginning, actually. And as for The Tour of Infinite Possibility, well, I may be biased but I know it will be tremendous. It’s a project that will inspire, delight, and ignite communities across Yorkshire this spring, and I’m looking forward to being such a big part of that.

Who knows, just when I thought it couldn’t get any better, maybe it will.