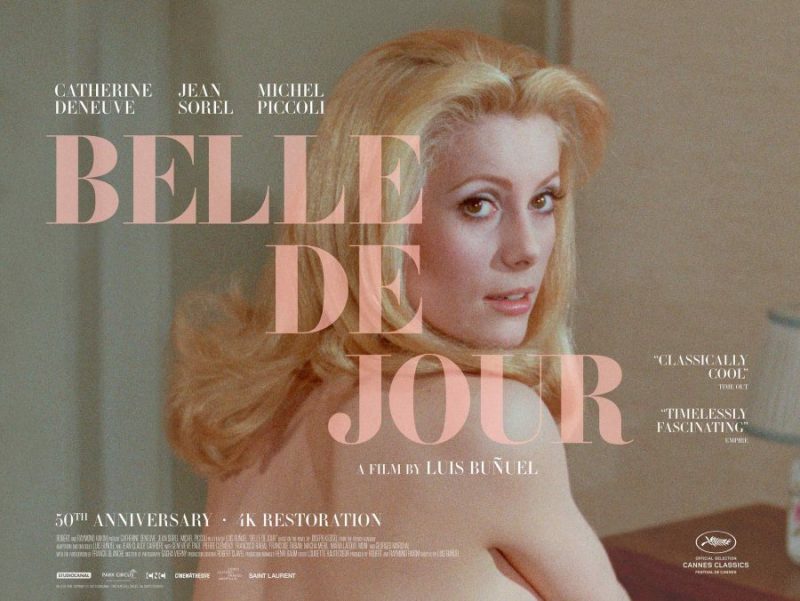 Belle de Jour, Luis Buñuel’s stylised comedy of bourgeois sexual manners divided critics when it was released in 1967. Heralding an ambitious boxset of the Spanish auteur’s best known work, the film has been given the full 50th Anniversary blu-ray restoration treatment. MR RENOIR takes a look…

1967 may not have been a landmark year for World Cinema (it all happened in 1959…), but Luis Buñuel’s Belle de Jour, released in a year defined by the gritty realism of Ken Loach’s Poor Cow and divisive violence of Arthur Penn’s Bonnie and Clyde, has deservedly gained ‘masterpiece’ status.

A simple story, it is a very different cinematic experience to either Loach or Penn. Catherine Deneuve’s Severine, sexually frustrated by her marriage to the reserved Pierre (played by Jean Sorel), finds release visiting Madame Anais’s house of ill-repute. This soon progresses to working there as the “Beauty of the Day”.

Newly reissued as a 50th Anniversary blu-ray edition, Belle de Jour is a film that demands – and deserves – its new 4K restoration.

An extremely visual experience, contrasting colours throughout Belle de Jour play a big part in its impact. Red is the colour of desire, from Severine’s scarlet dress to the roses in the bedroom that perfectly compliment her blonde locks. This red is contrasted by brilliant white, from the bedroom sheets to Pierre’s surgeon gown. 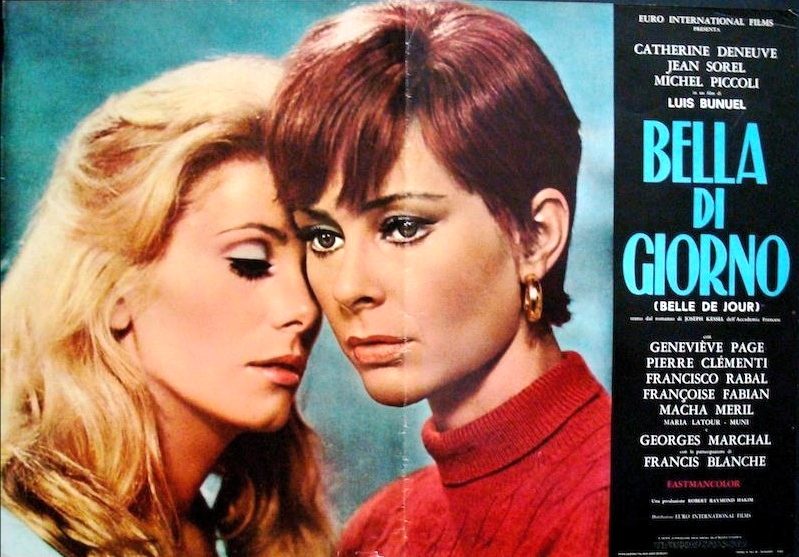 The range of colours, particularly in the autumnal woodland scenes and ski resort wools, are sometimes surrounded by darkness: Pierre’s conservative suit, raging bulls in a field – and never more prominently than when mud is thrown at Severine’s clean white dress in another fantasy.

Belle de Jour is a perfect example of how Buñuel, a pioneer of Surrealist cinema, challenged traditional storytelling. He takes viewers beyond escapism and realism by making them think about time: Severine’s daydreams or flashbacks confuse her past, present and future desires. The story is left open to interpretation. One of Buñuel’s signatues as a director is ‘Did that actually happen or didn’t it?’

The evolving character of Severine and how the role of a bourgeois housewife clashes with the emerging sexual freedoms of the 1960s are both compelling studies. Severine is preoccupied with desire. She wants to be dominated sexually, rather than as a typical wife. Buñuel demonstrates this perfectly in the scene of her first client experience in which a slap resigns Severine to her destiny.

This masterpiece of both Surrealism and European cinema finally gets the disc it deserves. It looks and sounds stunning. The disc is packed with plenty of extras, including a superb commentary by Professor Peter W. Evans who manages to add interest to a film already analysed to death by critics. He reminds us of the basic themes and throws in a couple of new ones, such as how chairs are linked throughout the film ending in the unfortunate Pierre’s wheelchair.

An additional two hours of material includes new interviews with the script writer Jean-Claude Carrière and grandson Diego Buñuel. Less riveting is The Last Script which at over ninety minutes may just test how big a fan of Buñuel you actually are. (Fascinating as his life was, I’d much rather use that time to watch the film again with the commentary or simply catch up on housework.)

Fifty years on, Twin Peaks has brought surrealism into our front rooms and David Lynch is a household name. I wonder how many have even heard of the great Luis Buñuel, let alone seen Belle de Jour? Definitely a film that should be on everyone’s Christmas list.

Belle du Jour 50th Anniversary Edition is available now. The film is on a limited cinema release and is screened at the Showroom Cinema in Sheffield at 18.15 on Monsay 2nd October 2017.

A Bunuel boxset featuring Belle de Jour plus Tristana, Diary of a Chambermaid, The Milky Way, The Discreet Charm of the Bourgeoise, Phantom of Liberty and That Obscure Object of Desire is released on 23rd October 2017.

Mr Renoir tweets as @RenoirVulture. He is the patron of Cinema Renoir, an underground private members cinema & gin bar bringing auteurism to the masses via Twitter.