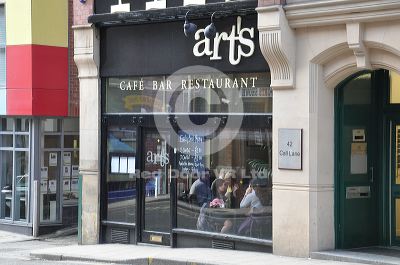 Arts Café is always such a pleasure for the arty diner with its changing range of carefully arranged original art works and tables that can be joined for a party (as it was on our visit) or set apart for a table for two (we have a fave right at the back of the sumptuous space). The service is attentive but unhurried and the a la carte menu has an impressive range of seven starters (four of which are vegetarian), eight mains (including fresh fish of the day), and five desserts (including a selection of British cheeses).

I recently had a risotto at another arts venue which I’m not going to name and shame (it must have been an off-day) which was mushy and tasteless. By contrast Arts’ roasted squash & sage risotto, with glazed orange & parmesan, had still perfectly separated rice the way it should be and was most flavoursome. Then Holly chose the smoked chicken & ham hock terrine which she has asked me to point out that the cauliflower was deliberately charred not overcooked!

Both mains come artfully served and fresh cooked to perfection with the sea bass really tender and tasteful and the steak done just as I like it, medium rare. The accompaniments are quite generous too and really set off the fish and meat with perfect parity. Holly particularly enjoyed the salad while I was pleased to have the option to try a field mushroom (I’m working on a soap opera at the moment in which mushrooms play a lead role!)

For those of you who follow my foodie reviews my choice of sticky toffee pudding will be no surprise (I’ve been on a quest for Leeds’ finest) and Arts are up there with the best, especially with the popcorn ice cream on the side. While Holly finishes the exquisite meal off with a brownie which is seriously naughty but nice. Arts is more than just an arty café: it IS a work of art in itself and a jewel in Leeds’ crown of cuisines.