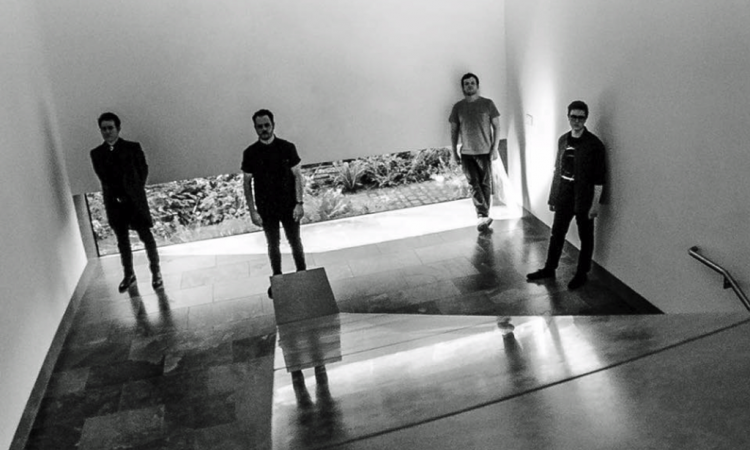 Within a year of forming, IST IST were being played by Steve Lamacq. Their appearance at Leeds’s Lending Room shows why, says JAMES FOUNTAIN. They don’t mess about.

Manchester four piece Ist Ist’s name comes from a German spin on the phrase it is what it is. Their sound is startling. Direct.

They open at the Lending Room tonight with a no-nonsense Preacher’s Warning, all crashing drums and bass guitar answered by doom-laden electronics, singer Adam Houghton’s deep, dark delivery reminiscent of Joy Division and The National in the same instant.

Clad in uniform black, Houghton’s guitar-playing is cryptic, face distressed as he booms: “Give me love,/Give me circumvention/Until the lights fade/I need someone to call my own”.

The brooding I’m Not Here follows, letting those in the audience not already acquainted with the Manchester-based band (clearly not many) what they are in for. 21-year old synth-man Matt Peters unleashes a fat wall of sound in the ironically-named Silence. Poetic angst-ridden lyrics indicate Ist Ist have been around the block. Most of the band are in their early thirties.

The bass opening of Son Is The Father leads into a philosophical turn from Houghton, a hard, Nick Cave-like edge, its Everything Is Different Now refrain being the title of their newly-released EP. New track Emily merges Peters’ synth vocals with guitars forming a haunting malaise of troubled love and relentless rhythm from impressive drummer Joel Kay.

Self-confessed fans of Brian Eno fans, Exists displays the group’s ample understanding of his sound-painting techniques with a heaviness that sends the Lending Room crowd into a trance.

Strangers examines zero-hours contracts: What are you doing here?/The people are depressed. There is no answer to this, forced into the mindset: Just keep your mind on the job. The pressure created by Kay’s drums and Andy K’s bass is overwhelming, suggesting the band may have an important topical role to play in years to come.

The tranquil opening chords of I Want to Disappear are a welcome relief: this is an unpretentious band wrought from realism. The extended Diversion ends the night with a final flexing of the band’s muscles and a sense of identity loss: it spirals hauntingly down, darker than dark.

Ist Ist, the last to admit it, are a force to be reckoned with.

Ist Ist appear at The Polar Bear in Hull on 5th March and Café Totem in Sheffield on 9th March. The Everything Is Different Now EP is available here.