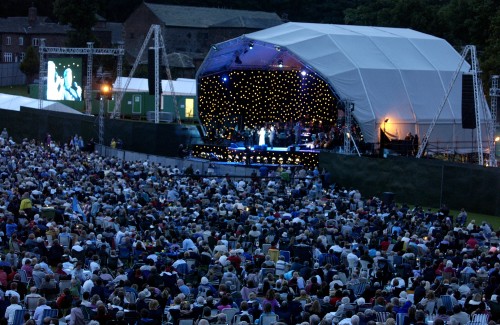 A guest post from Lizzie of Guest List Leeds (@Guestlist_Leeds) . . . and only a decade late! Well, we can forgive her and call it a preview . . .

In the same way that my daughter scorns pretty much everything I listen to, I stuck my nose up at almost* everything that my parents would happily have played all day. Especially Opera. ‘BOOOOORING’ I would moo, rolling my eyes. Or I would declare that it was ‘depressing’. Ironic really, considering that at one point I ended up being a Goth.

Having gone through every shade of alternative culture during my teens (Indie, Punk, Goth, Rock, Metal, Rave) I found myself at 20 years old, sitting in Temple Newsham park listening to Opera. And, here’s the thing . . . enjoying it.

When my friend had first suggested going for her birthday, I definitely wasn’t enthused. Maybe thused at a push, but it wasn’t my first choice of what to do for an evening. Being a believer in the power of birthdays and the privileges they bestow, I dutifully agreed to do whatever was her choice.

So, myself and a small handful of reprobates, into heavy metal and rave (I know it sounds counter-intuitive, but it is possible to like both and not start fights with yourself) made our way to Temple Newsham park. Chauffeured by a very bemused taxi driver who asked us more than once if we were actually sure we wanted to go to Temple Newsham, and who felt the need to inform us that ‘it’s that Opera thing on tonight you know’. Yes. We knew.

We found a seat on a high hillock with a good view of the stage but far enough away from other Opera goers that our cussing, play-fighting and general immaturity wouldn’t disturb them. In the world of Opera goers, we were ASBO candidates; no twin sets and pearls, no champers and strawberries – and not a single Volvo between us. That’s not to say that all Opera fans have these items as prerequisites, but that was how we viewed almost everyone else there. Because, y’know, we were so rock n roll . . . man.

What we did have was several litres of cherry Lambrini, rollies and, I would imagine, some kind of super-strength lager.

By the time it started most of the cherry Lambrini had gone. And I don’t remember the whole event in one consecutive memory. I don’t really remember what the singer was called. She was the kind of woman that the papers would probably describe as a ‘thinking man’s crumpet’, or the kind of woman your dad would have a crush on. She was blond and I think her name starts with an ‘L’. But what I do remember was that when the woman started singing, we fell silent.

It was like someone made us stop and focus on the scene. The sun setting, the slightly ominous clouds in the distance, and this tiny figure in red, creating astounding sounds; it was beautiful.

I had never before considered that Opera could be anything other than the tedious misery reserved for eight- hour car journeys of my childhood – a form of torture second only to Cliff Richard in my estimation. And yet this woman had managed to get a tumbling, drinking, fooling bunch of young people to stop in their tracks and pay attention to the (cough – sorry for this slice of home spun cheese, but) majesty of their surroundings.

It was actually breathtaking. It took my breath away. And not just because I was a wheezy smoker. For the rest of the evening we conformed to societal expectations. Our ASBO’s were pointless. Just for a while, we might as well have had twin sets, pearls and Volvos because we joined everyone else in marvelling at the power of one human being’s vocal chords.

Opera in the car? Not for me.

Opera in the park? Changed my view of Opera forever.

This year’s Opera in the Park is 21st July. Here’s more information.