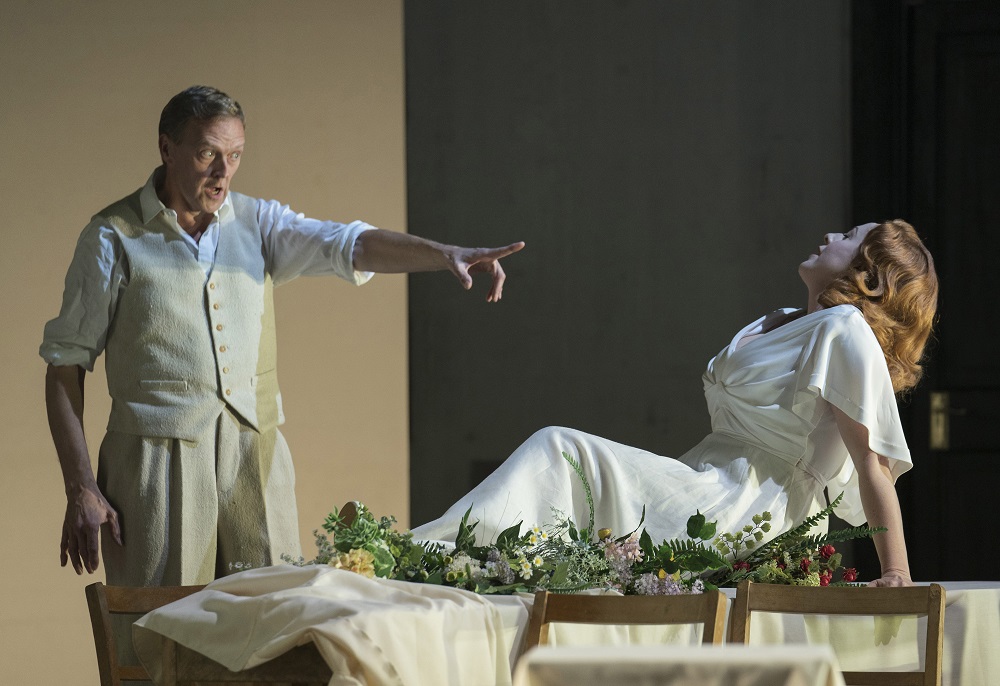 There is a lot of darkness and despair in this double bill. Janacek’s Osud (Destiny) is a tale of obsession with a challenging nonlinear structure that deliberately lacks resolution. Far better known is Mascagni’s Cavalleria Rusticana with its seething passions and intense piety.

Osud is only ever rarely performed. Comparing it to Janacek’s first great operatic success, Jenufa, one can see why.  The story is hard to follow – one short opening scene and then we’re flashing back twenty years, to a point after the protagonists have had an affair which has resulted in a child; we see them resume their relationship, but not how it began, nor why Mila’s mother is so pathologically opposed to it; we move forward five years to see the couple, now married, tearing each other apart, with the mother’s obsession proving the catalyst for tragedy; and then forwards another fifteen years, back to where we came in.

Fittingly for a story about a composer unable to finish his opera, Janacek gives us no real resolution. The composer Zivny is challenged to justify his opera – whose story is deeply personal and painful to him – but collapses as a storm rages outside. We end with him asserting the final act is ‘in God’s hands’.

Janacek’s structure – and the open ending – were ahead of their time, foreshadowing his own later experiments with narrative, as well as so much of twentieth-century literature and film. The score experiments with rhythm and harmony too. Janacek uses ‘speech melodies’, as well as passages of great lyricism.  Rosalind Plowright plays Mila’s mother. In Act 1 it is an understated role, but she is given the chance to shine in Act II as she rages and mocks, quoting Zivny’s opera back at him.  Giselle Allen excels as Mila, and John Graham-Hall as Zivny, powerfully conveys the composer’s obsession aa he is tormented by his memories.

Perhaps not the ideal introduction for anyone unfamiliar with Janacek’s music, Osud is a fascinating piece nonetheless, and beautifully performed.

From the overture onwards, Mascagni’s score for Cavalleria Rusticana is lush and tuneful.  Director Karolina Sofulak has relocated the action from Sicily to Poland in the 1970s, where the combination of austerity (dreadful clothes, empty shelves in the shops) and piety (a large crucifix is on stage throughout) is striking.

Jonathan Stroughton makes an excellent debut for Opera North as Turiddu, the reckless cad who gets his just desserts (in this production, a bullet to the head in an authentically Eastern European car, though I defer to others to determine whether this is a Trabant or a Polski Fiat) whilst Phillip Rhodes shines as Alfio (owner of said car and wronged husband of Lola).

But Giselle Allen as Santuzza is the absolute highlight.  It’s all the more remarkable given that she has so little time to adjust, let alone rest, between her departure from Osud at the end of Act II, and her appearance here.  It’s a performance of great intensity and of venomous fury.

Sofulak’s use of religious imagery is most potent in the scene (distilled from Santuzza’s fevered imaginings?) where she unbuttons his shirt and removes his shoes and socks, loosening her own hair so that she resembles Mary Magdalene at the feet of Christ, whilst he stretches out his arms on the crucifix.  This piety suffuses the score and the action, with the sound of church bells and the references to Mass (from which Santuzza is excluded because of her sin), the rendition of ‘Regina Coeli’ from inside the church, and the villagers’ Easter hymn.

All in all, an evening of passion and heightened emotions, jealousy and obsession.  And of glorious music.

You can see Osud paired with Pagliacci on 18 October, and then with L’Enfant et les sortileges on 20 October and on tour from 2 November.

Cavalleria Rusticana is paired with Trouble in Tahiti on 19 October and then with its traditional partner, Pagliacci, on 21 October and on tour from 26 October.