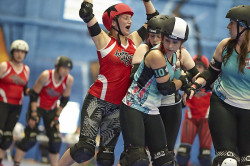 All photo credits go to Jason Ruffell @derbyonfilm (because my attempts were bloody awful).

I’ve batted this piece around in my head for a little while now, partly because I wondered how to approach it and a little bit because I’ve managed to break all the technology I own that allows me to write online (mainly due to real life/laziness intruding though). So having thought about it I kind of want to write this article in two parts.

To give you the background I recently went to Art and Activism at the LS6 Cafe, a fundraiser for the upcoming Ladyfest event. While there I was fortunate enough to hear a talk from (and later have a very enjoyable drink with) Chella Quint on the topic of activism through zines as well as a presentation from two members of the local roller derby league, Leeds Roller Dolls, on the sport and its history.

Now for better or worse I think of myself as a pretty ‘right-on person’ (yes I did have my fist raised at a right angle while writing that), and a female-led, competitive and contact-based sport like roller derby instantly starts ringing my ‘positive feminist idea’ bells. Being lucky enough to write for Culture Vulture gives me a good excuse to pester people, so I headed over to the presenters after their talk and asked if I could interview them for the site. “This’ll be great exploration of positive female role models in sport as well as an insight into fascinating sub-culture” I was thinking to myself (original I know).

The players kindly agreed to meet with me at their next practice and I left the event full of ideas about how I was going to write this wonderful, equality-promoting article and change the world with my words! The interviews themselves went well and I had a great time. I got lots of sound bites about feminism and how the sport is a great story of women reclaiming what was originally a spectacle of scantily-clad stereotypes and turning into the frenetic, serious sport it is today. In fairness this isn’t that hard to do if you go into an interview with an agenda. However, one person I met managed to change my idea on what the article should be about though (and to my shame I didn’t even get her name).

She asked what I was writing about and I said it was an interview about roller derby and why people play it. I also mentioned that I wanted to write about the game as a serious sport. In response she essentially said it was a relief that someone was just going to write about the sport and not about feminism because that’s all people seemed to be interested in. To be honest I was taken aback. I realised that in my hopes of writing an article highlighting my right-on views I’d totally missed the point. If I was interviewing Leeds Rhinos I wouldn’t be asking them questions about patriarchy, so why should roller derby be any different?

The people I interviewed are sportspersons – when they play they do so for the love of the sport not to make a statement. In the midst of a game their focus is concentrated on what’s happening directly around them not the ramifications for wider society. So this is the interview I’ve decided to write, the one that focuses on the sport and the passion these incredible people bring to it. And while roller derby’s connection to the continuing struggle for equality is certainly fascinating its place is not in this article.

So that’s the first part out then and here’s the actual article (and yes I’m aware that my conclusion about focusing on sport seems strange now that I’ve spent half of this article not doing so. but y’know…context!). 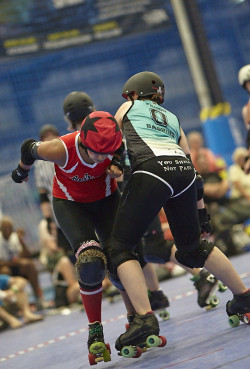 Whenever I mentioned the roller derby to friends in the lead up to the interview one of two things happened; either they’d never heard of it or they were vaguely aware of its existence and when trying to describe it kept referencing the film Rollerball. I remember thinking that this must be an exaggeration there’s no way the sport can be that brutal. As I arrived and saw someone requesting that more waiver forms be printed I start to wonder if they might not be right. Following this, as I was told that if I want to get photos that’s fine but I enter the practice space at my own risk, you’ll forgive me if I tell you that images of James Caan’s spiked fist started flashing in my mind.

Of course there’s a risk associated with playing roller derby at a professional level, as there is with any contact sport, but once I start talking to Hayley Avron, one of the trainers leading today’s session, I was introduced to a different side of the game. Taking over from the ‘Rag Doll Academy’ where trainees would put through their paces prior to joining the main league, today marked first of the ‘Wrecking Brawls’ recreational league sessions.

“With the Rag Dolls the focus was very much on the skills and not on playing the game. With the rec league there’re two elements really. A fluid and ongoing training programme involving drills and scrimmage (practice games) as well as allowing semi-experienced roller derby players the opportunity to play who maybe can’t commit to attendance requirements needed to be part on the competitive team. It’s kind of our way of recognising that people play roller derby for different reasons, have very different lifestyles and are able to commit at different levels.”

Hayley’s passion for the sport is palpable and I wondered if this was something that all roller derby players shared in common.

“People don’t always realise how passionate they are about it but it comes out in the time that they dedicate to it. The travel team skaters will skate two and half hours on a Tuesday, two hours on a Thursday and then three hours on a Sunday, then a lot of us will do extra training on top of this as well as all the committee work we do.”

Dedicating this much time to sport is a completely foreign idea to me and so I asked what is was that first attracted Hayley to roller derby and kept her playing.

“There’re a few reasons, I really liked the spirit of the sport, how it seemed to be really grass roots and DIY. I used to play a lot of sport when I was younger but I got injured and I never really thought that I’d be able to play roller derby at a serious level. What I realised was that as I got more involved and trained harder I could improve. I think that’s what keeps me going. “

This is where the idea of the ‘Wrecking Brawls’ league really comes into its own. It allows players of any skill level to take part and discover for themselves why the sport has inspired such a dedicated following. Should you wish to progress to a competitive level then there are opportunities to do so but the league also provides a space for the casual player to get involved. I got the opportunity to speak to couple of people taking part in the ‘Wrecking Brawls’ league to find out what drew them to the there.

Lianne: “A couple of my friends skate for different leagues around country and I came to watch one them skate with Leeds Roller Dolls. The thrill of watching the game was so exciting that I was like ‘I have to do this!’ I didn’t know how to roller skate but I just had to come along and be a part of that atmosphere. If someone’s struggling with something then another skater with that knowledge will come along and help you out, you’re never left alone, the support is just unbelievable.” 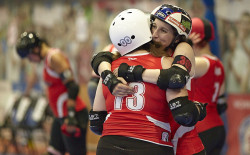 Emily: “It’s so welcoming; you hear a lot of jokes about it being like a family but it really is. I feel like I can come here with a really low skill level and have people work with me rather than believe I’m dragging everyone else down. Newbies aren’t singled out for making mistakes, little things like some giving you a thumbs up and saying ‘you’re doing better this time’ does wonders to lift your mood, and that’s really the spirit of roller derby.”

What I really took away from this event was the honest sense of friendship and teamwork that that exists between everyone taking part, from the seasoned pros to those making their first tentative steps out onto the track. No matter your age, background, or skill level ‘Wrecking Brawls’ offers a great opportunity to take part in a sport that you’ve possibly never heard of or had no idea how to start. While it is a wonderful example of a female-led movement (men’s leagues also exist!), promoting athleticism and kinship, at its heart it’s a great sport, just don’t blame me if you pop along for one session and find your previously varied social calendar being taken up with more and more roller derby-related events.

To find out more about Leeds Roller Dolls and Wrecking Brawls, whether it’s to spectate or take part, you can go to www.facebook.com/LeedsRollerDolls, www.leedsrollerdolls.com, www.twitter.com/leedsrollerdoll or email info@leedsrollerdolls.com. Also make sure to check out their upcoming bouts featuring the Kent Roller Girls and Copenhagen Roller Derby taking place on Saturday 7th September at Leeds Futsal. Phew!