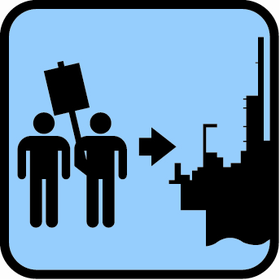 Katie Beswick (@ElfinKate) reviews How to Occupy an Oil Rig, at Theatre in the Mill, Bradford.

The best thing about living under a Tory government (are we still pretending there’s a coalition?) – and I don’t say this lightly, what with there being so much to choose from – is that it activates the political sensibilities of artists, who might otherwise be floundering about, desperately seeking substantial subject matter.

Of course, artists were producing political work under New Labour as well – but it seemed less searing then. And, when it wasn’t reflecting on the fallout of past Tory policy foolery, it was mostly post-9/11, post Iraq-war social commentary. It was worthwhile, yes, but – particularly in the theatre, my chosen medium – overly obsessed with the figure of the solider (I had enough of soldiers during my adolescence in Woolwich, thanks, when snogging squaddies down the now demolished Pullman and getting glassed by their fiancé was the leisure pursuit of choice amongst sixteen year-old girls with liberal parents and no sense of danger). Also, it was difficult to get viscerally riled about the circumstances of post-9/11 global politics, unless one was personally involved or acutely sensitive to issues of international injustice.

We’re all personally involved now though. What with paying astronomical university fees, navigating unemployment, having our housing benefit cut, realising corporations will literally sell us rotting, steroid-addled horse meat if it means they can turn a profit and being forced to look at Michael Gove’s face, daily, in both print and screen media. (His swollen, startled features are now imprinted on my brain in the manner of icons such as Marylin Monroe and James Dean, only less pleasant and, crucially, not dead.)

Which brings me, in a roundabout way, to How to Occupy an Oil Rig – the latest show from Daniel Bye, a performance maker and writer whose work, according to his website, ‘juggle[s] with comedy and tragedy, roughness and polish, truth and lies.’

How to Occupy an Oil Rig is a playful meditation on politics and participation; it is charming, important and genuinely funny.

Along with Kathryn Beaumont and Jack Bennett, Bye offers a step-by-step theatrical guide to protest, played out – in a nod to fragmented, postmodern performance weirdness – on a set made of giant Duplo, with the performers dressed in oversized dungarees, in the style of coked-up 90s children’s TV presenters.

Unlike much fragmented, post-modern performance, however, Bye’s work is very clear about its message. He wants us to protest, or at least, he wants us to think of protest as something we might really be able to do – a point demonstrated by the device of selecting, each evening, two audience members to star as characters in the unfolding drama. As these improvised characters navigate the multi-coloured stage-world, they show us how to join an online protest, how to crash a boardroom meeting, how to occupy an oil rig and, in a timely reference to my favourite news story of the moment, how to avoid becoming romantically attached to an undercover police officer.

I really enjoyed it. And, although, in the end, a performance promoting protest can’t help but border on saccharine sincerity, it’s good to be reminded that one can, perhaps, make a difference – if one is that way inclined.