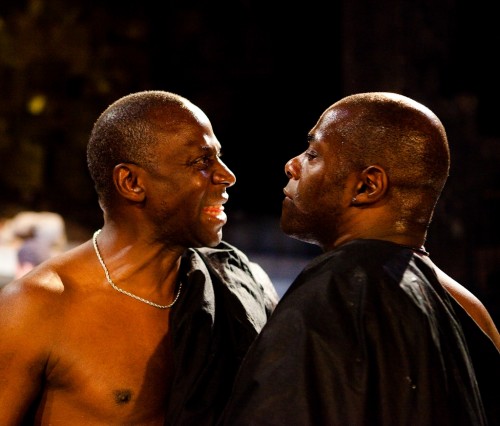 In the latest touring production from the Royal Shakespeare Company (RSC), Director Gregory Doran transports the action to Africa. Well before the play even begins there’s a carnival atmosphere already on stage with colourful costumes, live music and dance. Revelers prepare for Julius Caesar’s victorious return after he has triumphed against Pompey the Great.

The celebrations are quickly interrupted by the entrance of Theo Ogundipe as an eerie soothsayer warning Caesar to “Beware the Ides of March”. Shakespeare has the celebrations end here, rapidly setting us up for tragedy. Two of Caesar’s advisors, Cassius (Cyril Nri) and Marcus Brutus (an excellent Paterson Joseph), plot against him, fearing rumours Mark Antony (Ray Feardon) has offered him a coronet. Already dismayed by social unrest and Caesar’s imprisoned political opponents, both fear Antony will wrongly give an already tyrannical Caesar yet more power: “Man who has now become a God… we petty men walk under his huge legs and peep about.”

As the titular character, Jeffrey Kissoon gives a powerful performance, managing to present Caesar as both a cruel dictator and vulnerable man who actually possesses some sympathetic qualities. In one of his earliest speeches Caesar expresses his fear of dissent, wishing for “fat men around [him]”, who in their satisfaction are unlikely to revolt. Unfortunately for him too many are disillusioned and the big climax we’ve been waiting for is almost anti-climactic as Brutus’ gang cry “tyranny is dead”. Having done the deed, Doran more dramatically has them blood smear their hands in preparation to announce “peace, freedom and liberty”.

Most famously, Antony riles up the crowd to spread pro-Caesar feeling to avenge his murder. The second act starts with a bang before yet more doom and gloom as characters are killed off or unexpectedly commit suicide. Doran occasionally lightens the mood however, through Brutus’ servant, Lucius (Simon Manyonda), nodding off at comical moments.

Although their stage time is brief, Adjoa Andoh and Ann Ogbomo both present strong female characters as Brutus’ wife, Portia and Caesar’s wife, Culpurnia. One of the most compelling scenes shows Portia persuading Brutus to tell her his mind: “I have a man’s mind but a woman’s might.” A later scene where Culpurnia tries to convince Caesar he’s unsafe suggests it is the women pulling the strings. Shakespeare’s plays famously lack female characters but in Portia and Culpurnia he has created convincing bit-parts.

Designer Michael Vale’s set is impressive but simple, merely comprised of stone effect steps leading upward either side of an archway. At the top of the steps is a statue of a dictator facing the wall, perhaps to suggest his disinterest in his people. The colourful clothes of masses contrast with the more sterile white outfits of Caesar and his senators. The faction against Caesar have heads covered in black cloth and wear different coloured tunic suits, possibly representing their continued individuality in the face of a dictatorship. In the second act as the two opposing camps plot against each other, Vale transforms this basic set into an army camp by covering the archway to create a tent to match their military garb. Guns and cudgels are brandished while tribal drums set the mood.

Sound and light designers, Jonathan Ruddick and Vince Herbert bring the play to life with lightning storm effects; atmospheric starry nights; explosions; cheering and jibes from an unseen crowd and a fiery smoke-filled backdrop representing the sudden descent into all-out violence. Appearances of a dagger are accompanied by ominous screeching sounds that become a tad over-used as the people turn against any possible conspirators. Akintayo Akinbode’s music perfectly captures the play’s changing moods with a particularly melancholy tune to close performed by a lively on-stage band.

Famous for Antony’s “Friends, Romans, countrymen…” speech, Julius Caesar is one of Shakespeare’s weightier tragedies; With this in mind, its commendable RSC’s touring production is remarkably easy to follow. Powerful and captivating, it transports us to a time when people readily believed in spirits, ghosts and prophecies. Resetting the action in an unknown African country cleverly reminds us that although the play was written centuries ago, it’s still just as relevant today in its mirroring of existing political regimes and exploration of patriotism, honour and friendship. In keeping with historical events the play was based upon, the ending is exceedingly glum, confirming Julius Caesar is undoubtedly a true tragedy.

Julius Caesar shows at the Alhambra between September 25-29 before continuing to tour: