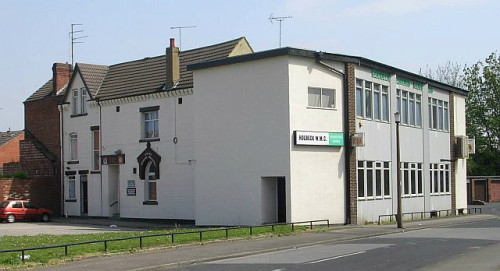 My brother told me about an event at Holbeck Working Men’s Club happening this Sunday so, out of intrigue more than anything, I went along with my eleven year old daughter. I have to say though, the last time I attended one of those ‘pay what you think it’s worth’ gigs, I asked for compensation at the end and a donation towards my future therapy!

It’s been years since I’ve set foot in a WMC. It used to be a weekend family activity in the 70’s – my dad was on the committee. I can’t say that I’ve ever actually been in the Holbeck WMC before though, but I wasn’t disappointed. It is a run down venue in a weird part of South Leeds, but I felt instantly at home there. People still respected the old ways of the WMC and queued at the bar – none of that free for all crap that goes on elsewhere. However, the clientele had changed somewhat, and there was no bingo – though there was a raffle (the prize was a large jar of pickled veg, a huge tin of olives and 59 baklava…. I can’t think what to even say about that, but they would have been lynched in the 70s!).

The afternoon was a live recording of fifteen minute plays – all very different. It didn’t get off to a good start with the first play. Some odd period drama thing, which we found to be dreadfully dull, but stayed in the hope that it would get better as it went along (not like me to be so optimistic, but I was on my own turf and felt surprisingly positive). Thankfully, the plays did improve – our favourite was play number four called ‘Just like Heaven’ about a man visiting his friend in hospital whilst she was in a coma, both amusing and moving.

All in all it was a fun afternoon. There was tea and cake, curry made by Harvi (Mr Peshwari – lovely to catch up with him as always!), cheap beer and a very entertaining compere, Alan, who really made it for my daughter. They aren’t really used to kids being there – there was a fair amount of swearing in one of the plays and Alan came to apologise afterwards, which amused us. I did however point out that I am a South Leeds girl and we aren’t shocked by swearing (my 11 year old does not swear though, I’m not that kind of South Leeds!). The last play was about an assassination based in a lap dancing club – maybe not quite child-friendly, but entertaining nonetheless.

A couple of the plays had to have elements re-recorded due to mistakes, but that did add to the fun of it. However, we had a good laugh, some good food, thankfully lost the raffle (!) and I actually paid what I thought it was worth – I put money in the jar rather than taking the jar home with me!