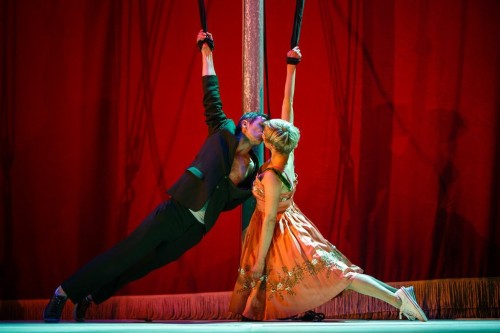 I’m sitting in a very muggy West Yorkshire Playhouse, and I’m confused, not for the first time admittedly. A bespectacled gentleman dressed in a cagoule and snood is staring at me, his face inches from mine. He says, ‘Oh yes, you are one of them’. He brandishes a small notebook and pencil and seems to be taking notes. As I look around, it seems many other audience members are being engaged in awkward conversation with these ‘oddballs’. I am not a fan of the tables being turned in this manner.

After a quick google search and a confirmation that I am in fact in the correct place, my first impression of Kneehigh theatre is extremely positive, and from the minute we entered the auditorium the entire company were ON. I took in my surroundings and after tucking my opera glasses and fan away I thought I should just take the thing in – whatever it was!

From start to finish it was an absolute treat. Kneehigh take the story of Tristan and Yseult – a Celtic legend of love, passion and adultery – and give it a comedic and almost surreal twist, mixing the medieval with the modern.

Audiences will be able to identify with many of the emotional twists and turns, ably guided by the ‘The club of the unloved’ and its ‘love spotters.’ They watch the events as you do, trying to make sense of it as you do, sharing the angst and piping up with ‘support’ for the cast, providing a much needed laugh after some of the the bleaker moments.

The basic synopsis (no spoilers) is that King Marke of Cornwall is under attack from the Irish. After the Irish pillage and rape Mark’s land The Irish leader is killed and King Mark makes a promise to the dying man that he will take and destroy all that he loves. It all gets a bit Shakespearean next with the standard mix-up/painful betrayal/reveal. I do not want to spoil the story for those that do not know it, but I can promise it is a belter. Even if Yseult is a bit of a Y-Slut, in my humble opinion, I’m sure some academic literary type can put me right, but anyway, onwards… The first half ends on a real high with some fun audience participation, (fear not scaredy cats, everyone remains seated and joining in is optional)

The choreography is well thought out, making innovative use of cleverly designed stage sets during the (very occasionally) clunky fight scenes and the enraptured love-making of a number of our dear misfits. The accidental tumble from the stage of one of the ‘love spotters’ was cheered by those who saw it and handled with a perfect comedic response by the wrong-footed chap.

During the interval the ‘love spotters’ join the live band on stage and take turns to sing karaoke style songs in their deliberately goofy manner and it is near impossible not to join in!

The second half takes on a slighter darker tone, with heartbreak, and becomes more poignant. There are still light-hearted comedy moments though which help to continue the fun. Craig Johnson deserves a special mention as Yseult’s maid, Brangian. He delivers pitch-perfect comedic moments and is easily likeable in a world of characters who extort not one teeny tiny speck of empathy from your reviewer.

Music is used cleverly throughout the performance as a very robust device to move the story along. In one moment a record player on stage is used to play a tear-inducing Nick Cave song and at other times the cast members sing accompanied by the band, although some mics seemed to be noticeably quieter than others, whether by accident or design it did not reduce the enjoyment of the performances too much, but I would have liked to have heard a little more of the male vocal.

Before you realise how long you have been watching, suddenly the laughter stops and a dramatic final scene unfolds, in which you discover that these deeply flawed people are all just really part of the struggle to love and be loved and a heart-wrenching sadness is felt that had this stone-hearted hack feeling very soggy around the eyeballs. The ending all the more powerful because of the fun journey that you are brought on to get there

If you want to be thoroughly entertained (and who doesn’t!) then I strongly recommend that you catch a performance of Tristan and Yseult whilst you still can.

And if all this has not convinced you, there were balloons. BALLOONS. Go see it, go now…now. Do not miss this. BALLOONS