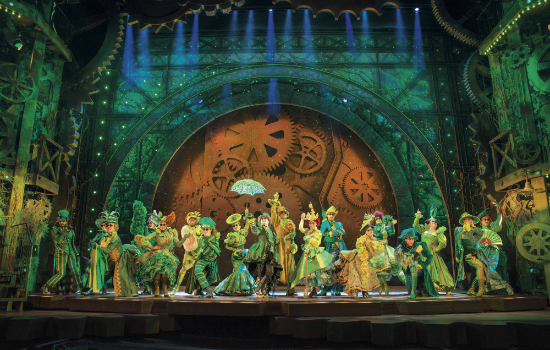 I’ve never called myself amicable with Dorothy. The Wizard of Oz must have been on the telly a dozen or so times when I was a kid but not once did I make it to the end. It always creeped me out. I could feel no sympathy for any of the characters, just profound aversion and animosity. I wanted to punch the lion, scrap the tin man and set light to that stupid scarecrow creature before mowing down those miserable munchkins with an AK47. And that goody-goody witch with the hoaky wisdom – eugh, the whole thing was torture, like being force-fed technicolor candy floss until you choked.

So I have to say I wasn’t as excited as some people I know when I mentioned I was off to see the stage prequel, Wicked (my mate Dave has seen it seven times, but he’s that kind of guy) which tells the back-story of the good witch Glinda, and her green-skinned enemy/friend/rival, Elphaba, the Wicked Witch of the West. In fact I was a bit worried that Wicked would be the sort of thing that only adolescent girls (and my mate Dave) are predisposed to enjoy.

But I was wrong. It was a hugely enjoyable even for a curmudgeonly old cynic like me. I can honestly say I happily sat through both acts without a single murderous thought against the Munchkins entering my head. Actually I felt sorry for the actors playing the munchkins who seemed to be swathed in fifteen layers of fabulous frills for most of their very energetic performance – they must have been hellishly hot, the theatre was baking.

The plot is every bit as bonkers as the film, and it definitely errs toward the preachy – not just racism and disablism, but speciesism is tackled too when a talking goat is sacked from Shiz university – but the script keeps the laughs coming as it cheekily subverts the original cheesiness. The good witch Glinda isn’t really good, she’s just a spoiled rich girl with an easy life. And Elphaba isn’t really bad, she’s a freedom fighter who has suffered discrimination owing to the colour of her skin and has unresolved attachment issues with her cold and distant father. At first they both loathe each other before they discover they genuinely like each other, then they have a bit of a falling out over a bloke. The fickle girly relationship is developed with charm and understanding and both witches are played with genuine gusto. The big, ballsy power ballads especially push the two female leads centre stage and make them soar to the stratosphere.

The political allegory is one dimensional and heavy handed, however – the Wizard’s scapegoating the talking animals (literally) and setting up Elphaba as “The Wicked Witch of the West” has a far too obvious parallel with America’s demonizing of alien cultures and targeting individual terrorist leaders… but then who goes to a musical for serious ideological edification? Not me.

Flying monkeys by the dozen, costumes that made Cabaret look drab, a Heath Robinson-like set, and some lighting effects that were truly magical – how did they do the rain? the rain was amazing and I really couldn’t work out how they did it – are what made Wicked a lot more enjoyable than I expected. It isn’t just for adolescent school girls – and my mate Dave.

Go and see it at The Grand Theatre, Leeds till Saturday 5 July