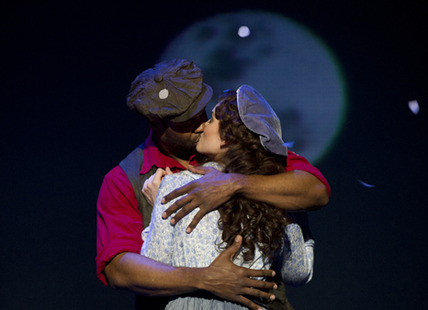 Shame you couldn’t make Carousel, you would have loved it. Sounds like you could do with cheering up. Has dad recovered, by the way; that last round of chemo sounded rough! Are you still cleaning up?

It wasn’t much like the film version – though don’t let that put you off. Main guy, Billy, is a right bugger. Imagine Uncle Tommy – you know, bit of a Jack-the lad, God’s gift, full of you know what – and you get the idea. He’s working as a barker on the carousel, which I suppose is a bit like one of those lippy sleaze-balls that used to work the dodgems at Holbeck Fair. Never understood why those guys got all the girls, but still.

Anyway, Billy’s been flirting hard with some girl from the local mill and the carousel boss, Mrs Mullin – who appears to have a thing for Billy, one of those Mrs Robinson things – gets all shirty and sacks the guy. Can’t really blame her, he does behave like a bit of a prat. Next thing you know Billy is canoodling with the factory lass – Julie Jordan, who comes across as a bit drippy at first, mucking about at work, hell bent on bagging the first boy who shows any interest – and they are talking about being in love and getting married within minutes of being alone on a bench together. For someone who’s a stickler and pretends she’s particular, she ain’t exactly backwards at coming forwards. And they say kids these days don’t have any self-restraint!

Two months later they are married. Behind everyone’s back by the look of it. And Billy, obviously unemployable, spends his time getting drunk, staying out all night with some dodgy people, and has to sponge off Julie’s friend, Nettie – see, I told you you wouldn’t have to worry about this being all arty, this is pure Beeston.

Julie’s best friend Carrie has a bloke too, Mr Snow. He comes across as quite a decent sort at first, though apparently he pongs of herring – not that that is any impediment to romance! Remember Diane over the road went out for ages with Barry from the chip shop and he positively reeked of lard and fried fish. Love conquers all, eh. Well, love and a bit of air freshener.

Before the end of the first act there’s something called a clam bake. Not exactly sure what that is but it reminded me of all those summer parties at the East Ardsley Wheeltappers and Shunters Working Mens Social club. Remember them, when the women did all the work and the men just moaned, stuffed themselves stupid, and got blind drunk? Pretty much the same. And about as much chance of a vegetarian option too.

Some guy starts singing, “look at them clams,” in the lowest voice ever. Then the rest of the cast joins in. I did feel a bit let down by the props people, I have to admit. There was a definite deficiency in the clam department. Not one single solitary clam. The stage was a clam free zone. Not like me to be such a literalist, but a clam or two might have been nice. Set the scene and all that. But no. Opera North are above clams I suspect.

Forgot to mention that Billy is a bit handy with his fists. Flabbergasted how he gets away with this. Carrie asks Julie, “why don’t you hit him back?” Exactly! That’s what we always got taught. Hit a woman once, she hits you back, and then brothers, fathers, cousins, friends take turns too. Hit a woman twice and . . . well, we don’t really hear much from people who do that, do we? Really wasn’t impressed with this New England community spirit

Before the clam bake Julie reveals that she’s in the club. They’ve been married two months! I know, shocking. Billy gets all moony about the idea of having a boy – you know the kind of thing, teaching him to fish, fight and swim, hoping he’ll grow up into a train driver, or cowboy, or boxer and not the sort of sissy that might say, “but daddy, I want to sing in musicals!” – and just when he’s getting all excited about giving his adolescent kids tips to “get round any girl” he suddenly realises . . . well, no need to tell you, do I! Like he says, any bum with no money can have fun with a son, but the financial implications of having a daughter are extraordinary. All that ribbon for a start! I’m pretty sure the American economy was built on accessories for daddies little girls.

So Billy, not the sharpest knife in the cupboard, decides the best way out of the slums is to stick up the mill owner with his ne’re do well accomplice, Jigger. They sneak off during the clam bake, but not before Jigger makes inappropriate advances towards Carrie and Mr Snow gets all aeriated and threatens to dump Carrie. Turns out he’s not only a one-man ecological catastrophe – you know how I feel about wildlife and the planet and stuff, well this guy is profiteering from the devastation of a whole species! I know it’s only a musical, but herring are important too. Rant over. Anyway, Mr Snow isn’t just an eco-fascist, he’s also a pompous, patriarchal prat. Carrie should have seized the opportunity and skedaddled.

Cut to the robbery scene. While they are waiting for the guy with the cashbox to show Jiggers gets out his deck of cards and inevitably cons Billy out of most if his cut of the takings. When the guy turns up he’s packing a pistol. Jiggers scarpers. Billy isn’t as fast on his feet – or rather is isn’t so quick in the thinking stakes – and knowing he’s about to get caught hurls himself on the knife he took from Nettie’s kitchen.

Everyone turns up from the clam bake. Julie manages to snatch a few words with him before he carks it. They say they love each other. Then Nettie starts to sing “You’ll Never Walk Alone,” (I always thought that song contained too much precious metal, but there you go.)

I got confused by the last bit, wish you’d been there to help. Billy goes to heaven, speaks to some guy who offers him the chance to go back to Earth to do something nice for someone, and chooses to see his fifteen year old daughter who seems to have got herself involved with some nasty ballet dancers. Didn’t make a lot of sense to me, but finally Billy meets up with Louise, his kid, and offers her a star (sorry, forgot to mention that he’d pinched a star from heaven!) which she refuses, so he slaps her . . . You’d think he’d blown his chance of redemption but it seems they are fairly lenient in the afterlife, and Billy ends up at Louise’s graduation listening some old fellow spout sentimental twaddle (too Brady Bunch, Partridge Family, Waltons, for my taste, far to sugary.) He’s able to tell his wife and kid that he loves them and that things will be all right. Which is something, I suppose. Theologically I don’t think it washes.

But that doesn’t matter, does it! What counts is that the songs were ace, the singing was brilliant, the dancing was incredible, and the stage was a carousel . . . what more could you want! Like I said pity you missed it.