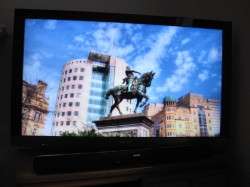 After much anticipation Leeds’ own local TV service ‘Made in Leeds’ will launch .. soon.

It was due on air in November last year, a test card gave a tantalising flash early in 2014, then it all went a bit quiet. Now, with artfully-shot time lapse pics of city landmarks like the one above looping on Freeview Channel 8 it appears a launch is, well, imminent.

What’s important now is that we give Made in Leeds a warm welcome. For better or worse it’s ours, and it’s here.

What’s absolutely certain is we’ll never get another go if this fails, so Leeds needs to get behind the project. Here’s why it matters.

Made in Leeds has one huge asset. A slot at number 8 on the Freeview programme guide.

We’re all well aware that Leeds doesn’t get the TV time it deserves.

The BBC’s Look North may be accused by viewers elsewhere in Yorkshire of being Leeds-centric in its coverage (and it goes out of its way to prove those critics wrong) but it has only half an hour a day of flagship output and a handful of bulletins (alright, two handfuls) to serve Leeds and the rest of a dynamic region. Any attempt to increase localness is met by howls of protest from vested media interests decrying state-funded opposition.

ITV Yorkshire’s Calendar has been through a near-death experience and has emerged probably the stronger for it; leaner, fitter, more tech-savvy but ultimately hamstrung by similar institutional constraints to Auntie. ITV regional programmes get half an hour on weekdays and similar bulletin opts. Hell will freeze over before ITV plc bosses in London allow diverse regional news and events coverage to dilute their precious ‘brand’.

It wasn’t always so. In the days before the suits ditched the golden chevron Yorkshire Television’s regional coverage – made in Leeds – allowed for plenty of local innovation.

Not only news and documentary output, some of which scooped international accolades, but also an experiment with Britain’s first breakfast TV, and the half hour of school holiday daytime joy that was Calendar Lunchtime. There was nothing high-tech, highbrow or high-budget about this local programming, but it had a distinctive voice and outlook totally absent from today’s schedules. Until … later this year.

Made in Leeds has the opportunity to pick up where the old-style YTV left off. Things have changed, and for the better. TV news reports can be shot on iPhones and uploaded in seconds – not shot with a crew of three and sent to Boots for developing. The whole city is better connected. I’ve learnt so much more about my home city from Twitter than I ever picked up walking the streets as a journalist.

But launching local TV from scratch is a big ask, and this is where the rest of the community plays its part.

There’s been so much negativity about local TV. Mainly in London, where to everyone’s amazement the existing players wriggling in the nest of vipers that is the capital’s media scene collectively sank their fangs into the newest and weakest competitor. Quelle surprise. As Made TV CEO Jamie Conway points out on Prolific North, don’t let the fact the audience measurement system is calibrated around the ‘old’ TV regions spoil a good (bad) news story.

Here’s a thought. Maybe local TV isn’t about London at all. Of course they had to have a go, it wouldn’t do to have something good in the regions that’s not available inside the M25, but with most existing TV based there anyway any benefits are limited.

Look instead at Mustard TV, ‘live – from Norwich’, where the green shoots have been quietly sprouting (boom-tish) for months. Or at Notts TV in -er- Nottingham. For startups in austere times they’re doing OK.

Leeds can be like that. There will be disappointments, of course. The service can’t be all things to all people. There will be some good stuff, and some absolute garbage. Presenters and programmes will come and go. Some will find it too parochial, others not hyperlocal enough. Critics will tut every time a syndicated programme hits the air, another lot will moan there aren’t enough famous names. And of course the usual siren voices will cry ‘pop and prattle’ if there’s no live Opera North twice a week.

Existing media players are likely to be cool, in the sense of sniffy rather than laid back. They’ll take the paid-for ads of course, damn with faint praise and wait to pounce when the first figures come in. Made haven’t made it easy for themselves, telling meetings I’ve attended that the clients they’ll be targeting are advertisers currently using local radio and newspapers. You can’t buck Darwin.

What we all need to do is put ourselves out to give the new kid a chance. For those active in any Leeds based organisation that means making themselves available as guests and contacts. For those who can spend, maybe capitalise on the novelty to place an ad before Christmas. For the rest of us, the challenge is to break ingrained viewing and listening habits, tune in and get an idea at first hand of what’s on offer.

If it succeeds we can say we were there at the start. If it fails we can say we gave it a fair go. If we just ignore it, or assume without trying it’s not for us, we’ll never get another opportunity to show our city to our city in quite the same way.

We’ll retreat to our semi-private worlds of Twitter and Facebook, we’ll create networks of websites and blogs (yes, like this one) seen by our mates and our extended circles.

We’ll lose a truly public, accessible and near-universal forum available to all with a TV set in the home. I’m a huge believer in local radio; Made in Leeds offers the opportunity to combine the best of that, its community relevance and accessibility, with the added attraction, as many see it, of pictures.

So let’s give it a go. All they need to do, and only they can, is name the day.

He has his own blog, and you’ll find him on Twitter as @leedsjourno