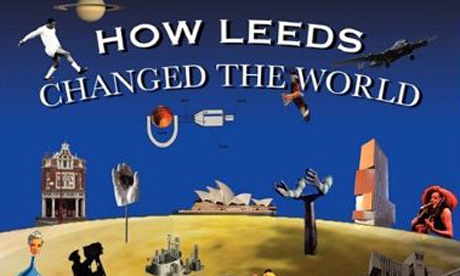 Bramley, Leeds 13. A Monday morning in September. The beginning of another week.

Through the upstairs windows of a house just off Stanningley Road, the pallid sunlight creeps in between the shut curtains, slowly lifting open Paul’s weary eyes.

He feels aimlessly around the bed, but can’t grasp hold of anything other than the crumpled duvet. His wife Helen is already up. She’s downstairs in the kitchen preparing the kids’ packed lunches, the radio switched on just loud enough for the whole house to hear and to get out of bed.

With nobody to cuddle up to, Paul throws on some clothes, visits the bathroom to point Percy at the porcelain, and finally heads downstairs.

He reaches round her, still making the kids’ sandwiches, to see what’s in the cupboard. He hasn’t got the stomach for a big breakfast this morning, so he pours himself a bowl of cereal from a box he and Helen had bought at ASDA (founded as Associated Dairies & Farm Stores in Leeds in 1949) on their weekly shop last Friday. The posh food from M & S (which also began in Leeds as a stall in Kirkgate Market), Helen likes to save for when they’ve got guests.

Paul takes his bowl into the living room and switches on the TV. On the breakfast shows, every voice he hears is a regional one. Gone are the days when the still and soulless, hectoring enunciation of BBC English was all you would hear on the box or the wireless. Indeed he can still hear one of those new and real voices from the kitchen: Helen is listening to Chris Moyles, born and raised in Leeds, learning his trade on hospital radio in Wakefield and on Radio Aire. 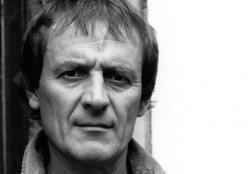 Where Paul’s from, these things matter. The poet Tony Harrison wrote time and again about being a Beeston lad taught to speak posh at his grammar school: there was a time when a Leeds accent meant you could only be given the joke parts in Shakespeare. Even in the nineties, the locals came out in force when the transport service planned to introduce talking bus stops, and chose a Received Pronunciation voice rather than a normal local person’s twang.

But this morning, as he dives into the milk sea in which his Cheerios cheerlessly bob about, Paul can hardly utter his own voice, never mind worry about anyone else’s.

All around the living room, the remnants of another weekend are scattered like debris. Sunday afternoon was a rainy one, so Paul and the kids stayed indoors: on the table is a set of playing cards and a Cluedo board made by Waddingtons, which began on Wade Lane. By the telephone rests Helen’s book, Joanne Harris’s latest novel (who herself was once a teacher at Leeds Grammar).

Meanwhile Paul’s new LUFC away shirt (the horrible black and green affair which normal people can’t stand but for some reason he quite likes) he left on the settee, having taken the boy to Elland Road on Saturday. Replica shirts, of course, began with the legendary Leeds side of the sixties and seventies: Don Revie’s team were the first to make them big (to the enduring delight of Mr Bates and the detriment of everyone else’s pay packet).

Not long later, as the young’uns go off to school and Helen heads out, Paul leaves for work. He takes the train for the brief journey from Bramley to Leeds City station. When he disembarks and joins the streaming crowd that flows through the ticket barriers, onto the concourse and out into the big city, he gazes across at his fellow passengers arriving from across Yorkshire and far beyond.

They’ve been coming to Leeds for quite some time: the city provided the world with its first horse-drawn railroad, its first functioning commercial locomotive, its first rack and pinion railway, Europe’s first overhead electrical tram car, the country’s first flying plane in Britain, its first permanent traffic lights (erected on Park Row in 1928), not to mention the M1 motorway to London and the Leeds and Liverpool Canal to, well, Liverpool.

He has to take the train every morning because Helen uses the car, driving to work over the tar roads that were pioneered by the Leeds and Bradford Boiler Company.

And yet for all that, the traffic still ambles slowly past the Scarborough Taps, and around the Queen’s Hotel and City Square (mostly thanks to the taxi drivers dropping off their passengers at absurd spots).

By trade, Paul is a joiner – and a good one at that. He has always been in the construction industry, having learnt his craft at the Leeds College of Building – the only college of its kind in the country. He joins a great lineage: it was Leeds engineer John Smeaton’s use of hydraulic lime in concrete, combining it with pebbles and powdered brick as aggregate (Paul actually knows what these words all mean), that made concrete the putty of the modern age; helped along by Joseph Aspdin who invented Portland cement and his son William who developed the mix. 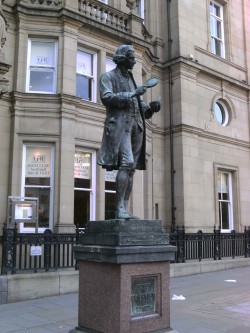 Now he’s working on the site at the new Trinity Leeds complex. The project has been in the pipeline for years, plans made and rubbed out time and again. Indeed the pencils developers used to draw their vision for the site were made what they are in Leeds: it was Birstall-born Joseph Priestley who discovered how Indian gum could rub out lead pencil marks, leading to the pencil erasers we casually use today.

When he arrives at work, the radio is on and the DJ playing a mix of old hits: Chumbawumba were on a moment ago (Armley’s most notorious squatters); the Kaiser Chiefs are on the air now.

At lunchtime, Paul leaves to go and find some grub. He heads east, passing by the Corn Exchange where a handful of Goths are sitting by the steps. The Goth culture itself grew out of Leeds, and particularly from the Phono club. Paul walks by, towards Kirkgate (following in the footsteps of Friedrich Engels, who once traipsed here studying the condition of the poor working people on the banks of the Aire), and steps into the newsagent outside the market.

He decides to pick up a copy of the Evening Post to spend his lunch hour wincing over, but first has a coy glance at the magazines on the top shelf. Now ten-a-penny, EX magazine was the first lads’ magazine with a staple diet of football, girls and banter, and that was from Leeds too.

He grabs a cheap sandwich and a can of Tizer (made from the carbonated water invented by Priestley again when he first discovered a method of infusing water with carbon dioxide in 1767).

The working day comes and goes. When Paul heads back home at the end of the afternoon, he’s the first to arrive back. He catches up with the sport news online (made possible by Leeds which at the start of this century had the largest internet server farm in Europe and more ISDN lines per head than any other city, handling over 33% of the UK’s internet traffic to make it the biggest internet city in Britain). 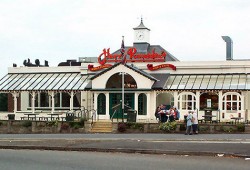 His wife Helen meanwhile is at night school this evening (the first one of which was opened by a wealthy Quaker family in Leeds around the 1870s). When she and the kids arrive back for dinner, he suggests fish and chips for dinner. It’s Friday, after all. The history of fish and chips is long and complicated, even controversial: like the Caucasus or the oilfields of the Middle East, its strategic political importance makes it a frequent arena for conflict and strife. Yet whilst many claim to hold the key to the history of the dish, few can say they have mastered it – few except Harry Ramsden, whose name belongs to the UK’s oldest chain of fish shops, its founding Guiseley branch holding the record as the largest fish and chip shop in the world.

After their tea, the family settles down for the night. On the box, every other channel is broadcasting a Yorkshire TV show: Calendar on ITV, Airline, Duty Free and Rising Damp on Gold. For all that however, they decide to put on a film instead. Louis Le Prince after all pioneered the motion picture when he shot the first moving pictures on paper film on Leeds Bridge in 1888; though the DVDs in their living room cabinet have come some way since then.

Jeremy Paxman is hosting Newsnight at half past ten (from Leeds himself, though you wouldn’t know it). But rather than stay up, Helen and Paul go off to bed. Whilst she finishes her Joanne Harris, he’s just starting an old book he’d never before got round to reading – one of the first to tell the stories of working people’s lives and tell it like it is.

“What’re you reading, love?” asks Helen as he finishes his chapter and sets the volume to one side.

“Just something I picked up in town a while ago. Thought it looked interesting. Something about a northern writer making it big down south. The author were from Leeds an’all.”

“Oh, was he?” she yawned, hardly very interested. “Nice to know Leeds has given summat to t’world then, in’t it?”

Resting his head on the pillow, Paul quietly murmurs, “Yes love,” and switches off the light.

Mick’s ‘How Leeds Changed The World’ is an encyclopedia of a city, an A-Z of its people and its way of life. From the well-known local fables to the hidden stories, it is a real treasure chest. From Thomas Ambler (1838-1920) who designed iconic buildings around the city, to Arnold Ziff (1927-2004) whose philanthropy has helped the University, Tropical World, Jimmy’s and so much more; stopping off at the Theory of Evolution and the abolition of slavery, in all of which we in Leeds have had a had.

Written with Mick’s own brand of Leeds-forged down-to-earth humour and sharpness, it’s a delight both to skim casually and to fully get stuck into. Every page tells a captivating tale, and one you may never have heard before. There is every probability that if you read it from cover to cover, you will become quite insufferable, spending pub nights with friends, dinner dates with a lady, afternoons with mum and dad and grandma, sharing every single thing you discover about Leeds.

But then, saying that, who cares? We’re Leeds and we’re proud of it!